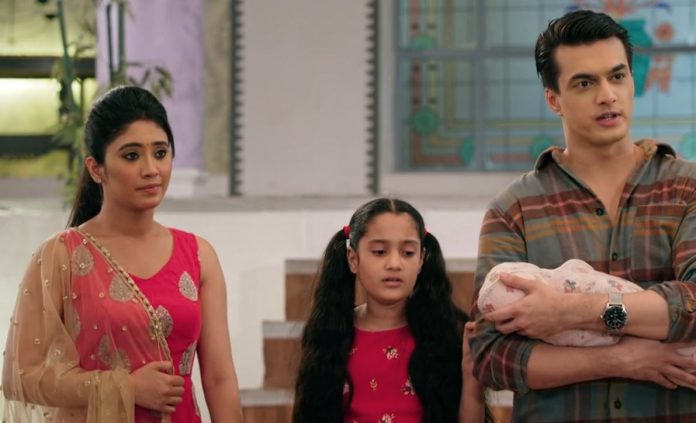 Yeh Rishta Kya Kehlata Hai 13th October 2020 Written Update Shocker for Goenkas Kirti gets a shocking call from the lawyer, who questions her about Krish’s custody. He asks her if Krish would be living with her or Naksh. He tells that they should decide it first, else they have to fight a custody case. Kirti is much worried. He wants to keep Krish with her. He imagines Naksh snatching Krish away. Naksh and Krish leave Kirti and go away.

They don’t want to live with Kirti. She gets scared. She goes to hug Krish. She prays that she doesn’t get away from her son after losing Naksh. She wishes for a miracle to happen. Dadi wants Surekha and Suwarna to keep Krishna away from her. She didn’t know that Krishna is responsible for Manish’s accident. Suwarna tells Dadi that Krishna is innocent, she didn’t wish to create such a situation that accident happens.

She asks Suwarna to just send the girl away. She seeks her help. Surekha tells Dadi that they should speak to Kartik and Naira first before sending Krishna away. Dadi asks her not to ask them. She tells that she will inform Kartik and Naira that she will send away Krishna, she will pay for her expenses, but not tolerate Krishna at home. She feels Krishna is very unlucky for them. She expresses her bitterness for Krishna. Krishna overhears their conversation. She cries a lot and goes to make prayers. She wants to go away.

She knows Dadi and Manish aren’t liking her. She is aware of the fact that Kartik and Naira love her a lot. She thinks to not put them into test. She thinks to get away from them to save them from the troubles. She decides to leave for everyone’s betterment. She makes a drawing on the floor. She doesn’t want to meet anyone. She is sure that Naira will understand that she left. Kartik comes there to get water. He sees Krishna’s drawing.

Krishna stands away from the family in the drawing. Kartik realizes its meaning. He tells Naira that Krishna left the house. He asks Naira to come fast, they have to go and search for Krishna. Naira hurries with him. They find Krishna struggling to open the gate. They stop Krishna and hug her. They don’t want Krishna to leave them and go. Krishna tells that she was leaving the house for Dadi and Manish’s sake.

Naira asks Krishna to give them time, they will sort out the matter. She doesn’t want Krishna to go anywhere. Kartik asks Krishna to think of her little sister. He tells that Kairav and Vansh would be coming too. He wants Krishna to stay with the family. Krishna gets happy. Kartik and Naira put her to sleep. Kartik tells that he would have not forgiven himself if Krishna went away. He doesn’t think Krishna is unlucky for them.

Manish rebukes Kartik for not asking his advice before making such a big decision. He expresses his dislike. Kartik realizes Manish isn’t happy with the adoption decision. He tries to change Manish’s mind. Kairav and Vansh return home on the baby’s Naamkaran ceremony.

Reviewed Rating for this particular episode Yeh Rishta Kya Kehlata Hai 13th October 2020 Written Update Shocker for Goenkas: 5/5
This rating is solely based on the opinion of the writer. You may post your take on the show in the comment section below.