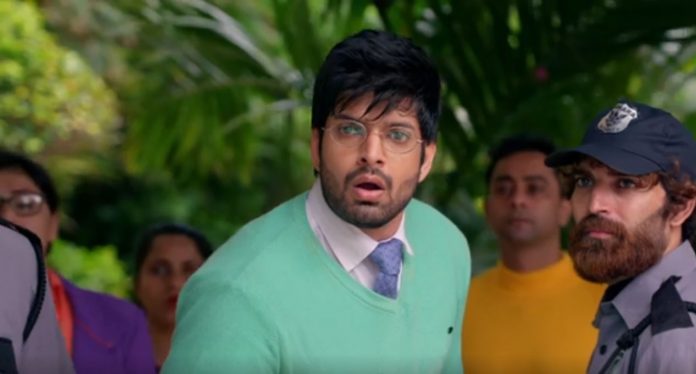 Choti Sardarni 14th October 2020 Written Update Manav’s madness Sarabjeet finds Meher worried. He cheers her up. He tells her that they are tension free now, they shall just go and have a city tour. Meher agrees. Manav stays busy in creating Meher and his marriage picture. He tells Meher that he has fought with death to come back for her. He just wants her as his bride. He knows Meher is worried for Sarabjeet’s reaction. He doesn’t want her to worry for any reason. He wants to explain her that he has come back for her sake. He goes mad in her love.

He goes to book a suite opposite to Sarabjeet’s suite. He thinks he should take Meher’s favorite chocolates for her. He gets a shock to see Sarabjeet and Meher having a good outing. Meher misses her children. Sarabjeet tells her that Param is also planning their anniversary. Police alerts them about a criminal around. The criminal man takes Meher at gun point. Sarabjeet warns him to stop. Manav can’t see Meher in danger. He runs to save Meher.

Kulwant gets into a joyful talk with Param and plans the anniversary party. She faces an obstacle. Meher likes the boutique. She asks Sarabjeet if he has chosen something. Sarabjeet surprises her with his choice. He tells that there can be nothing like her. He tells that she is his choice, her smile will kill him. He romances her. He asks the lady to show something unique for his wife. The lady shows the unique gifts.

The lady tells them about the diamond tiaras. He asks Meher about her favorite colour. Manav reaches there to keep an eye on Meher. Manav and Sarabjeet tell that Meher’s favorite colour is green. Meher tells that she used to like green before, but she loves red now, her husband’s choice, his favorite colour red. Manav gets more jealous seeing their closeness. Meher senses Manav around and gets distracted.

Sarabjeet tells Meher that she is really special for him. He tells the lady that Meher and he are married for a year now. He flirts with Meher. They buy the tiara and ask the lady to get it delivered at the hotel. Kulwant’s sons are seen trying to sell the onions to earn money and impress their wives. Kulwant is shocked to see them working hard. She tells that she will praise them for their work. She angrily beats them with slippers. Later, Sarabjeet and Meher reach the hotel and feel tired.

Sarabjeet tells her that they will have dinner and then leave for the airport. He finds her lost. Meher is worried and wants to talk to Manav about Aditi. She wants him to be loyal towards Aditi. Manav rings the fire alarm to get them out of the suite. Sarabjeet rushes Meher out. He tells Meher that nobody had left their rooms. He wants to find out why the alarm rung just for them.

He goes away, leaving her alone. Moreover, Manav meets Meher and tells that he has done this to meet her, the fire of jealousy is lit in his heart. He requests her to come with him. She doesn’t listen to him. Sarabjeet returns to her. He tells her about the false alarm. Manav leaves. Sarabjeet finds Meher tensed. She hugs him with the fear of losing him. Meher and Sarabjeet find Aditi sad, when they talk to Param on the video call. Sarabjeet wants Param to keep Aditi happy.

Furthermore, Param tells them that Aditi is much sad and doesn’t smile, she isn’t eating anything. Sarabjeet asks him to insist Aditi to have dinner. He wants his sister to be happy. Param tries to cheer up Aditi. Aditi stays depressed because of Vikram. Harleen wants her to speak to Vikram. She asks Param to go and call his friends to give an invite for the party. She pacifies Aditi. Manav wants to save the family from breaking apart.

Reviewed Rating for this particular episode Choti Sardarni 14th October 2020 Written Update Manav’s madness: 3/5
This rating is solely based on the opinion of the writer. You may post your take on the show in the comment section below.