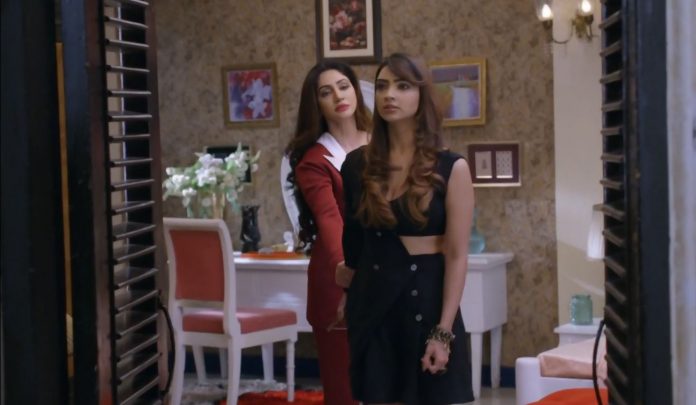 Kumkum Bhagya 15th October 2020 Written Update Rhea hates Pragya Rhea goes to meet Pragya and gets emotional. Aaliya doesn’t want Rhea and Pragya to unite. She thinks she should have come by some way to stop Rhea. She can’t lose Rhea. She calls Rhea. When Rhea doesn’t answer, she vents anger on the servant. She realizes that Rhea has got distant from her. Rhea hears Pragya’s conversation on a call. She feels bad that Pragya accepted Prachi and Ranbir’s relation just for Prachi’s happiness.

She feels Pragya has hurt her feelings. Pragya wants Rhea to listen to her once. Sarita is happy to see Ranbir and Prachi together. She feels Ranbir is the best guy for Prachi. She stops Shahana from disturbing Ranbir and Prachi. Sarita sings happily. Ranbir and Prachi make the tea together. She asks Shahana to let them talk and spend time. She tells that Ranbir was already shy. She likes Ranbir a lot. Ranbir tells Prachi that Rhea has hurt her a lot, he angrily ended the friendship with her. Prachi tells that he should have not done this.

She feels he is really crazy. He tells that Rhea doesn’t deserve friends like them. Pragya asks Rhea why did she call her if she wanted to go. Rhea tells that she has lost her mum again. Pragya tells that she has a connection with her and can’t see her hurt, so she didn’t give her to police. She wants to see Rhea smiling and happy. Rhea asks her not to lie. She tells that Pragya wanted her to stay free and then face a sorrow.

She feels Pragya has decided it for Prachi’s sake. Pragya wants her to stop her anger and hatred. Rhea wants her share of love. Pragya asks her to love others to get love. She tells that Prachi has no greed, she doesn’t want to snatch anything from her. She praises Prachi. Rhea can’t hear Prachi’s praise. She asks Pragya if she doesn’t see anyone else. Pragya tells that she is just calling the wrong as wrong.

Pragya doesn’t call her bad, but a wrong doer. She apologizes on Sarita’s side. Rhea asks her not to be sorry, and try to bring her mom back. She wants Pragya to get her mom’s love back. Pragya knows Rhea is upset with her mom. She tells that maybe her mom was helpless. Rhea tells that she could have solved the problem. Pragya tells that the problem would be big to get away from a child. Rhea tells that her mom doesn’t miss her, else she would have come to see her once. Pragya thinks of her daughter, who would also have complains like Rhea.

Rhea tells that Meera took her mom’s place. Pragya asks her to think good of her mom’s love, since her dad loves her a lot. Rhea tells that her mom left her dad too, she never came back, because she doesn’t love them. Pragya is sure that her mom would be waiting for the right time. Rhea asks what about the lonely daughter. She tells the moments when she missed her mom in her life. She breaks down. Pragya realizes her pain and feels sorry. Pragya tells Rhea that her mom would love her, she would be helpless to get away, she would still long for her. Rhea doesn’t want to trust Pragya. Pragya realizes that Rhea hates her mom.

She wants Rhea to live well by getting rid of the pain and hatred. She thinks Abhi isn’t a good dad, since he doesn’t know Rhea’s emotional pain. Rhea calls up Abhi and asks the reason for Pragya’s leaving. Aaliya is worried to know what does Rhea want to say. Abhi doesn’t want to tell Rhea. He tells that her mom had own reasons to leave them. Aaliya stops them from talking further. He asks Abhi not to answer Rhea, she is already disturbed. She lies to Abhi. She calls up Aaliya. She tells that Abhi won’t be able to talk about Pragya.

She manipulates Rhea. She tells that her mom was a selfish woman and took a baby with her. Abhi stops Aaliya from filling hatred in Rhea’s mind. Rhea can’t believe it. Pragya tries to talk to Rhea. Rhea believes Aaliya since she was saying all that in Abhi’s presence. She starts hating Pragya. She blasts her anger on Pragya. She insults Pragya and breaks her heart.

Reviewed Rating for this particular episode Kumkum Bhagya 15th October 2020 Written Update Rhea hates Pragya: 3/5
This rating is solely based on the opinion of the writer. You may post your take on the show in the comment section below.