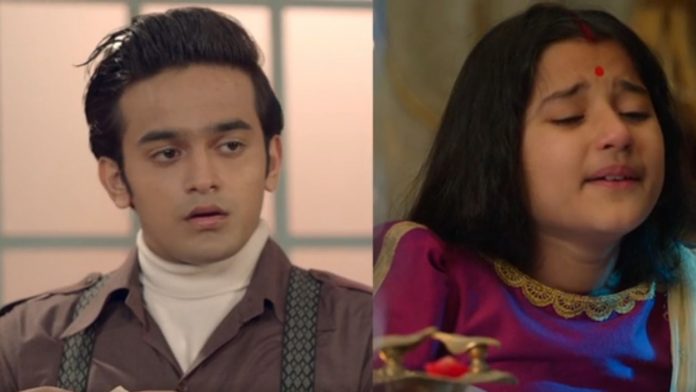 Barrister Babu 15th October 2020 Written Update Bondita’s letter Bondita recollects that she has got the newspaper along in which she had seen Anirudh’s picture. She gets the newspaper from her bag. She doesn’t know what’s written in it. She asks the man to read it for her. The man who got her to the brothel by lying that they are going to meet Gandhi ji takes an advantage of her illiteracy. He thinks it will be good to mislead Bondita and that too easily.

He puts no efforts in reading out the news. He reads out that Anirudh got engaged to his childhood friend Saudamini, the picture of the pretty girl is also there. Bondita sees Saudamini’s photo with Anirudh. She can’t believe that he has cheated her and broke their relation. She breaks down into tears. She tells that she will ask Anirudh why did he do this when they meet. She wants to know why did he lie to her.

Surayya asks Bondita how will she contact her husband. Bondita tells that she had come in contact with her husband before marriage with a letter, she will send a letter for him once again. She asks the man to help her in writing the message for Anirudh. The man readily agrees so that he can fool her and dump the letter for Anirudh. He sits to write the letter. Bondita narrates her feelings of anger and annoyance.

She asks Anirudh to answer her, if they are not friends anymore. She is much angry on him. She tells that Anirudh always called Saudamini a good friend, he is a liar to get engaged to Saudamini. She vents her anger on him. The man dumps the letter outside the brothel, which flies to the hotel side where Anirudh is staying. Bondita wants to know if she is a liar or Anirudh is a liar. Anirudh gets Bondita’s letter unknowingly. He thinks its fate that he got her letter once again. He tries to read the damaged letter to get hint of her whereabouts. Bondita weeps thinking of Anirudh and Saudamini’s relation.

On the other hand, Anirudh looks for Bondita. He takes help from Rasiya, who agrees to find out Bondita. She tells him that she also wants to help Bondita. Anirudh waits for her reply. Tara learns about their meeting. She realizes that Rasiya is cheating her. She also cheats Rasiya and misleads her by swapping the girls at the brothel. Rasiya fails to find Bondita and informs Anirudh that Bondita isn’t at the brothel. Anirudh is relieved to know this, since brothel would be hell for Bondita. Rasiya is also glad that little Bondita isn’t at such a bad place. Tara keeps Bondita away from them. She doesn’t want Bondita to reach her husband.

Reviewed Rating for this particular episode Barrister Babu 15th October 2020 Written Update Bondita’s letter: 5/5
This rating is solely based on the opinion of the writer. You may post your own take on the show in the comment section below.