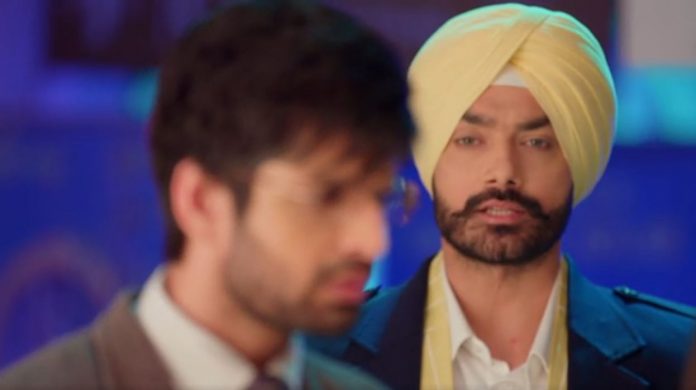 Choti Sardarni 15th October 2020 Written Update Sarabjeet confronts Manav There will be a big twist when Sarabjeet learns about Manav and Meher’s love. He learns that Vikram is Manav. Meher doesn’t know that Sarabjeet is overhearing their conversation. Manav expresses his love for Meher. He tells her that he has come so far just for her. He tells that he doesn’t want to lose her. Sarabjeet confronts Vikram Diwan. He asks Vikram for whom did he come and why, whom does he not want to lose. He wants to know what is Vikram thinking. Sarabjeet is worried for Aditi’s future. He learns about the problems cropping in Vikram and Aditi’s marriage.

He asks Vikram why did he come after them to Serbia. He finds it very odd to meet Vikram at the airport. Manav isn’t hesitant to tell Sarabjeet his real identity. He thinks of his promise he has made to Surya that he will hide his real identity of Manav hidden from the world for the sake of Seema. Meher gets worried when Sarabjeet confronts Vikram. Just she knows the truth that Vikram is Manav. What will Meher do?

Will Manav admit the entire truth to Sarabjeet? What will Sarabjeet do on knowing Manav’s painful story? Will Sarabjeet unite Meher with Manav? Are you not hooked for the coming twists? Meher’s decision to deny Manav’s love and Sarabjeet’s death sequence form the most dramatic scenes. Check this space for the upcoming episode. Keep reading to get the detailed update of the show very soon.

Meher and Sarabjeet enjoy their dinner. He cracks a joke to remind her that she refused for the kiss. She also jokes on his demand. He wonders why is Vikram calling him at this time. He answers Vikram’s call.

Sarabjeet finds his talks strange. He asks him if he is with someone. He invites Vikram in his anniversary party. Manav congratulates him and asks for Meher. Meher tries to avoid him. Sarabjeet asks him to wish Meher. Manav sees Sarabjeet gone and asks Meher about their anniversary. Meher gets relieved to see Sarabjeet away. She disconnects the call. Sarabjeet introduces her to his friend. She appears happy. Manav doesn’t think she is happy within heart. He tells that she will be really happy when he is with her. He wants to convince her and unite with her like before.

He knows that none can come between them. He finds Meher’s box left there. He sends it to Sarabjeet. Sarabjeet is relieved that the tiara didn’t get misplaced. He compliments Meher. He wants her to wear the red tiara. They find the green tiara instead the red one. They wonder how did it get changed. Manav has changed the tiara as per Meher’s choice. Sarabjeet thinks it maybe a mistake from the store.

Manav thinks he knows Meher well, he is aware of her choice. He wants to meet her in the party and thank Sarabjeet for protecting her. He wants to tell Sarabjeet that he can’t live without her. Seema calls him to know when will he come back. She tells that Aditi went to her Maayka, she is much upset with him. She tells that she requested Aditi to come back, he should also come home. He promises to come home soon for her sake. Seema gets glad. Meher and Sarabjeet reach the airport and have a talk with Param. Manav follows them.

Aditi meets Seema and Surya. She is much sad that Vikram changed. She tells that her life was always tough, she found happiness and love in Vikram, she got a family as well, but now Vikram’s behavior has changed completely. She feels her fate is bad. Seema consoles her. She asks Aditi to have patience and not doubt on Vikram. Surya tells that Vikram will love Aditi a lot. Manav awaits Meher at the airport.

He finds her and tells her that he doesn’t want to lose her. Sarabjeet overhears this statement and questions Vikram what did he mean. Manav tells that he doesn’t want to lose his dear ones. Sarabjeet suspects him. He didn’t think he will meet Vikram in Serbia. He wants to talk about Aditi. He confronts Vikram about his lie. Manav makes an excuse that he was on a secret mission and couldn’t tell anyone about his trip. Sarabjeet doesn’t get convinced by his answer. Manav doesn’t reveal the truth. Sarabjeet tells Meher that he will not let Vikram play with Aditi’s life. Meher is worried.

Reviewed Rating for this particular episode Choti Sardarni 15th October 2020 Written Update Sarabjeet confronts Manav: Meher and Sarabjeet’s Jodi really rocks.5/5
This rating is solely based on the opinion of the writer. You may post your own take on the show in the comment section below.