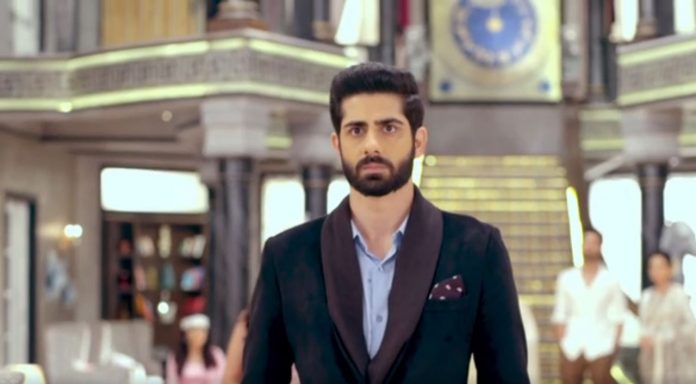 Ishq Mein Marjawan 16th October 2020 Written Episode Vansh hurts Riddhima Riddhima thinks about the source by which Vansh is doubting on her. She realizes that Vansh doesn’t have Sejal. She wonders why is he suspecting her, what is the proof he got against her. He wants to know about her deceive. He was playing mind games with her for a reason since he has already seen her with Kabir. He thinks Riddhima is fooling him.

He doesn’t want any deceive from Riddhima. He doesn’t let her play with his feelings. Riddhima tries to find out why does Vansh suspect her. She doesn’t want Vansh to kill their relation by suspicion. She also doesn’t want to doubt him on Ragini’s murder case without getting any evidence against him. She gives him a fair chance to prove his innocence. She expects him to be fair with her. She has developed feelings for love. She realizes that she loves Vansh now. Vansh doesn’t believe her.

Meanwhile, Vansh and Riddhima come together for the Navratri puja. Dadi conducts the puja to make Vansh and Riddhima’s marriage a strong bond. She wants them to have faith and love in their marriage. Vansh is forced by Dadi to perform the rituals with his wife. He doesn’t feel like loving Riddhima, after knowing that she had been with Kabir in his absence. He tells Dadi that he will do the rituals for her sake. Dadi brings them closer by making them perform the Suhaag rituals.

Vansh tells Riddhima that the red colour signifies the sacred relation of marriage and also of cheat. Vansh makes Riddhima wear the Suhaag bangles. He angrily breaks the bangles and hurts her hand. Her hand bleeds by the broken glass bangles. Riddhima bears the pain. When Chanchal calls it a bad omen that the bangles broke, Vansh answers her in a way to accuse Riddhima. He feels Riddhima is responsible for the failing relation.

He wants Riddhima to answer the family if she considers it good or bad, if she wanted the bangles to be worn or broken. He has no faith left on Riddhima now. Riddhima vows to win back his faith. She tells that red colour also signifies love and the strength of Goddess. She wants to gain such strength and end his suspicion on her. Riddhima can’t tolerate Vansh’s suspicion, when her intentions towards him are changing. She drops her plans to take a step against Vansh. Vansh and Riddhima have a battle for love and faith.

She wonders how does everyone got to know it when she never got careless. She tells Anupriya that she should have told Vansh about Anupriya’s mistake of burning Uma’s painting. Anupriya laughs at her further, making her regret. Dadi tells Riddhima about Vansh, who never celebrated Navratri after his mum’s death. Riddhima wants to share Vansh’s pain. Vansh reveals another shocker by calling the family altogether to know a secret. He tells them about the betrayer in the family. This gives tension to Chanchal, Aryan and Anupriya once again. Riddhima realizes Vansh is going to expose her secret.

Vansh tells them that he has called them to see the punishment for the cheater. Chanchal and Anupriya are too scared, while Riddhima is fearless to ask him. Vansh tells them that the person who has cheated him is a close family member, who always faked love and care towards him. Anupriya accuses Riddhima to fuel the fire. Vansh shouts on Anupriya calling her the cheater. He tells her that she is the one who betrayed him and stabbed his trust. He defends his wife, and gives a big relief to Riddhima.

He accuses Anupriya for burning Uma’s painting. She is relieved that Vansh doesn’t know about Kabir. She asks for a chance to explain him. She defends herself by cooking an emotional story to fool him. A big twist comes when Anupriya reveals about her illegitimate son. She tells Vansh that Riddhima was blackmailing her to do all the wrong deeds. She blames Riddhima and calls her the culprit.

Vansh believes Anupriya’s false story and tears. He directs her anger on Riddhima. He can’t hear anything against Anupriya once again by believing her story. He suspects Riddhima knowing she had been blackmailing Anupriya. Anupriya doesn’t let Vansh listen to Riddhima’s clarification. She stabs herself to fake a suicide to win Vansh’s trust. Vansh is left stunned by Anupriya’s move. What will happen next? Keep reading.

Reviewed Rating for this particular episode Ishq Mein Marjawan 16th October 2020 Written Episode Vansh hurts Riddhima:5/5
This rating is solely based on the opinion of the writer. You may post your own take on the show in the comment section below.