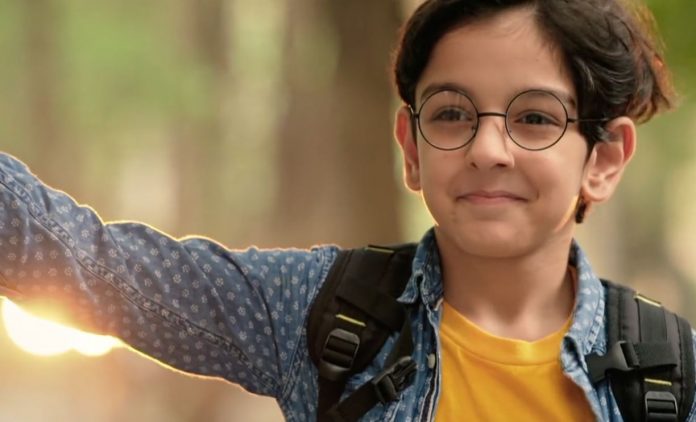 Yeh Rishta Kya Kehlata Hai 15th October 2020 Written Update Kairav brings twists Vansh announces that he is back home and runs to hug Gayu and Samarth. Kartik and Naira wait for Kairav. Vansh gets excited to see Vatsal and wants to take him. Samarth asks him to just see him from far. Vansh tells that he is Vatsal’s big bro. Kairav’s entry is awaited. Kartik waits for Kairav for long. He tells that Kairav would be getting his stuff to impress his sister. He wants to go out and bring Kairav. Naksh stops Kartik and Manish.

Kartik worriedly asks about Kairav. He asks Naksh about him. Naksh tells them that Kairav is still at the airport, he refused to come until his parents come to pick him, he didn’t listen. He tells that Kairav got adamant. Kartik and Naira are shocked. They tell that they will go to the airport and bring Kairav. Pandit stops them from leaving the puja. Naira tells that she has to raise her children well. She wants to do her duty first.

They take the baby with them. They get glad to see Kairav coming. Kairav makes a grand entry and surprises the entire family. The family meets him and likes his special gift for his baby sister. The family enjoys their time with Kairav. The baby also smiles seeing Kairav. Krishna sees the family singing and dancing. She is happy. She takes care of the baby. Kairav hugs his family members. He sees Krishna and asks them if she is the new maid.

He asks her to stay away from his sister. He pushes her away. Kartik asks Kairav to talk to elder ones well. He warns Kairav. Kairav tells that Krishna’s hands are dirty, the baby can catch an infection, she should be away. He just thinks of his sister. He asks Kartik not to get angry on him. Naira tells Kairav that Krishna has become a family member now. Kairav wants to know their relation. Naira tells that she really feels a connection with Krishna.

She introduces Krishna to Kairav and Vansh. Kartik tells them to come along for the baby’s naming ceremony. Kartik and Naira sit back in the puja. Kairav plays with the baby. Krishna wants to gift the toy to the baby. Naira takes the baby from Kairav. Kairav and Vansh bring more gifts for the baby. They please the family. Krishna tells that she also made a toy for the baby, which broke. Naira gets busy in managing the baby. Dadi sends Naira to pacify the crying baby.

Krishna feels lonely. She cries a lot seeing Naira leave. Naira spends time with Kairav. Kartik tells Naira that he stopped her from telling everyone about Krishna’s adoption for a reason. He reveals about Manish’s annoyance over their decision. He tells her that Manish asked him to think of Kairav before adopting Krishna. Manish warned him about Kairav’s emotions. Kartik thinks Kairav will feel they cheated him and gave his place to Krishna.

Reviewed Rating for this particular episode Yeh Rishta Kya Kehlata Hai 15th October 2020 Written Update Kairav brings twists: 4/5
This rating is solely based on the opinion of the writer. You may post your take on the show in the comment section below.