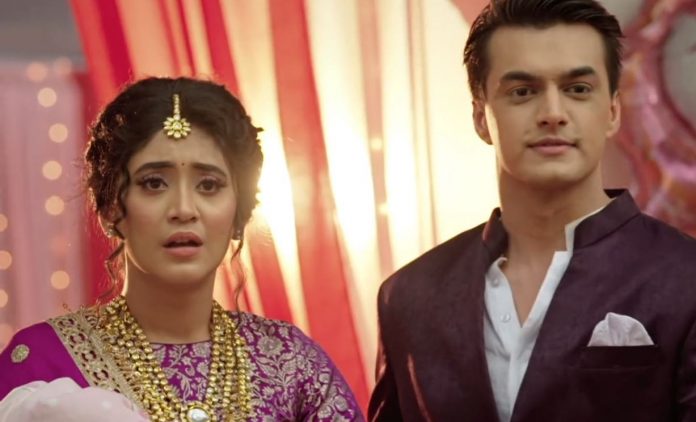 Yeh Rishta Kya Kehlata Hai 16th October 2020 Akshara returns Krish, Vansh and Kairav belong to the rich families Singhania and Goenkas, unlike the orphan girl Krishna. The boys makes plan to have fun and enjoy their bro time. Krish finds Kairav and Vansh younger to him. He tells that he can’t play kiddish games with them. Vansh asks him to play with Krishna, who is same age of him. Krish tells that Krishna is part of the family now as declared by Kartik.

Kairav tells that she isn’t family. Krish tells that he should ask Kartik about her. Krishna meets them and tries to get friendly. Krishna shows the toy she has made for them. She tells that she can make more such toys for them. Kairav tends to accept her friendship, but Manish comes in between. Manish makes the kids away from her. He takes them to show some lovely gifts.

Meanwhile, Kirti tells Naira that everyone is bribing her and blackmailing her to keep the baby name of their choice. Naira apologizes to her. Kirti tells that Naira has equal right to name the baby. Naira asks her to name the baby. She makes Kirti happy. Kirti tells her that she will deck her up now, but she can’t see herself in the mirror before the ceremony. Naira agrees to follow the instructions. Kartik tries to bring the kids together.

He has accepted Krishna as his elder daughter. He wants Kairav to accept Krishna as his elder sister. He is sorrowful that he didn’t see Kairav growing. He had left Naira all alone and couldn’t live Kairav’s childhood. He wants to see his baby’s childhood well now. He makes Krishna bond with the baby. Manish isn’t against adoption, but doesn’t think that Kartik’s decision is right.

He tells that Kartik already has two kids and doesn’t need to adopt anyone. Suwarna tells him that Kartik is doing a noble deed by adopting someone. She asks Manish to trust Kartik and Naira, they will never Krishna affect the lives of their own kids. She tells that Krishna’s life will get better by adoption. Manish doesn’t want peace to break.

Moreover, Naira comes for the ceremony. Kartik is bowled over by her beauty. He gets happy and compliments her. Kirti asks him to give a necklace as Nek for her. Kartik praises Naira’s natural beauty. Kirti and Kartik have a fun banter. Kartik gives Suhaah shagun to Kirti, which makes her emotional since she is getting separated from Naksh. Naira speaks to Varsha and learns that the baby resembles Akshara much.

Naira gets emotional when Varsha tells that the passed away elders come back to us in a different avatar. Varsha tells that Akshara has come back to Naira in her baby. Naira emotionally cries. She misses Akshara a lot. She now feels Akshara is with her. Kartik also gets emotional on knowing this. Kartik and Naira get the baby for the naming ceremony. They have a celebrations time until the pandit gives them an alphabet for naming the baby. Krishna gets a decorated water pot as a gift from her side. She gets acknowledged.

Kirti tells them that she will name the baby the best way. The family sings and dances to pass the time. Naira tells the baby that her name will never change, even if relations change in her life. Kartik knows what’s on Naira’s mind. Manish dislikes Krishna’s presence at home. Even Dadi doesn’t want Krishna to get importance. Naira makes a lovely suggestion which is unexpected. Kartik and Naira name their baby Akshara. The family also likes the name and feel Akshara has come back to them. They get too emotional and happily cry. Akshara returns to them in the form of the baby.

Reviewed Rating for this particular episode Ishq Mein Marjawan 16th October 2020 Written Episode Vansh hurts Riddhima:3/5
This rating is solely based on the opinion of the writer. You may post your own take on the show in the comment section below.