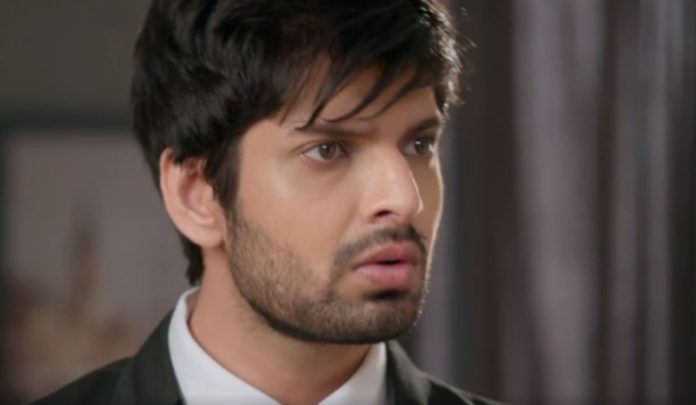 Choti Sardarni 17th October 2020 Written Update Manav to kill Sarab Manav is surprised to see Meher wearing the red tiara. He wonders why didn’t she wear the tiara given by him. Everyone wishes happy anniversary to Sarabjeet and Meher. Harleen makes Sarabjeet wish Meher in a romantic way. She wishes them all the happiness. She wishes Aditi also stays happy like Meher. She finds Meher and Aditi having the same tiara. She asks Sarabjeet about the unique tiara. She tells him that even Aditi is wearing the same tiara.

She asks Vikram from where did he buy the same tiara. Sarabjeet tells that the store staff makes the gift look unique and exclusive to sell it. He is happy to see Meher and Aditi wearing the same tiara. Meher realizes that Manav had sent the green tiara for her. She didn’t wish to wear the green tiara to give him any false hopes. Sarabjeet wants to know from Aditi about her terms with Vikram. He asks Aditi why is Vikram behaving strange.

Aditi tells him that there is no reason, he just changed after marriage, he is behaving like a stranger. She cries out her pain. Meher wants to talk to Manav. Manav wants to know his mistake that he lost Meher. He tells Meher that he is in a helpless situation. Meher tells him that its not their mistake, but the fate which separated them. She tells that she has her own life now, its not the mistake of anyone related to them.

She has Sarabjeet and kids in her life. She doesn’t think they need to suffer because of her past. She tells that he should not make Aditi suffer. She tells that changing the tiara won’t change their fate. She asks him to accept the present. He tells her that he can never love Aditi, or anyone else after losing Meher. Aditi complains about him to Sarabjeet. He assures that he will talk to Vikram. Manav feels Meher still loves him.

She asks him not to get false hopes. She isn’t his love now. She asks him to realize Aditi’s worth. She wishes he understands and accepts the truth soon for the betterment of everyone. She understands his pain. She expects him to understand her. She wants him to ask his heart that she is right. Sarabjeet asks Vikram to take care of Aditi. He finds Vikram alienating again. He wants to talk to Vikram. He takes Vikram aside to ask him about his issues with Aditi. Manav tells him that he doesn’t care what others think.

He feels Sarabjeet can never understand his story. Sarabjeet wants him to know a brother’s concern. Meher realizes that Manav will bond with his son Karan. Aditi tells Meher that Vikram and Karan have a strange bond, they are always happy together. She tells that she will take Karan to Vikram. Meher worriedly stops Aditi from taking Karan to the party hall, since there are many guests and his immunity is low.

She asks Aditi to share her troubles with her. Sarabjeet tells Vikram that he found Aditi after many years, he can never see her in sorrow. He apologizes to Vikram. He asks Vikram to not avoid Aditi. Aditi tells Meher that Vikram is avoiding her a lot since they got married. Meher tells her that such little issues are there in every relation. She tells that Sarabjeet and she have managed their relation well with time. She gives hopes to Aditi.

Manav feels bad seeing Sarabjeet requesting him. Sarabjeet warns Vikram against hurting Aditi. Manav tells that he isn’t scared of any threatening. Kulwant arrives in the party and congratulates everyone. Sarabjeet sees her and recalls that she has killed Manav. She wishes him with all her heart. He wants justice for Manav.

He confronts Kulwant about Manav’s murder. He pledges to get Kulwant punished for the crime. Manav realizes that Sarabjeet is coming between Meher and him. He wants to kill Sarabjeet to get Meher back. Sarabjeet is trying to seek justice for him, while Manav is trying to kill such a noble man. Will Manav realize Sarabjeet’s goodness and spare him? Keep reading.

Reviewed Rating for this particular episode Choti Sardarni 17th October 2020 Written Update Manav to kill Sarab:5/5
This rating is solely based on the opinion of the writer. You may post your own take on the show in the comment section below.