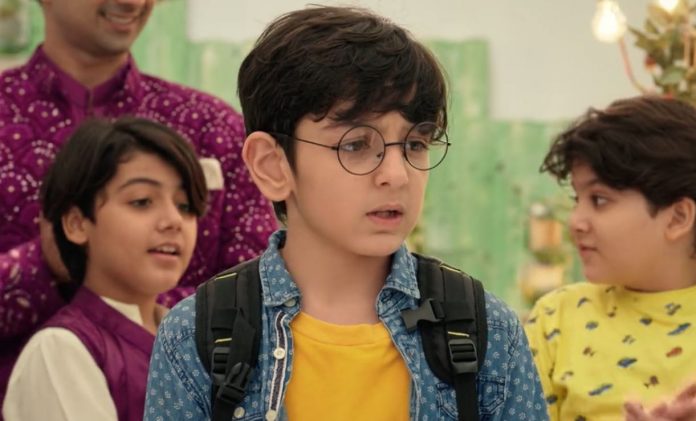 Yeh Rishta Kya Kehlata Hai 17th October 2020 Written Update Kairav displeased Naira chooses the name Akshara for the baby. The entire family approves it, except Dadi. Naira tells Dadi that she has always felt Akshara with her since she gave birth to her daughter. She feels her mum has come back as her daughter. Kirti convinces Dadi to keep the name Akshara. The family happily celebrates the completion of the Naamkaran ceremony. Kartik plans a photo shoot. The entire family gets decked up.

Naira is glad to have Akshara back. She feels fate has united her with Akshara. She gets emotional. On the other side, Manish and Dadi don’t want Krishna to be part of the family photo. Dadi wants Kartik to understand them. Manish knows that Kartik will not listen to them. Kartik hugs Krishna. He gets her for the photo, which upsets Kairav. Kairav argues with Kartik and Naira about Krishna.

Kairav wants them to not involve Krishna in the family photo. Kartik gets angry when Kairav asks him to choose either of Krishna and him. Naira reminds Kairav about joining the church staff for the pictures. She tells them that they have to keep humanity alive in their hearts. She convinces him to make a relation with Krishna.

Kartik and Naira ultimately convince Kairav. Kartik calls Krishna at the last moment for the photo. The photo gets spoiled. Kartik attends a call from NGO. The man asks him to adopt Krishna else send her back to the NGO. He doesn’t let Kartik and Naira keep the girl at home without the legal adoption. Kartik wants to speak to Kairav first before adopting Krishna. Naira tells him that its hard to convince the family so soon. Kartik tells that Manish and Dadi will agree some how, they will not get against the noble deed. Krishna bonds with Kairav, Krish and Vansh.

Kairav is upset with her. Krish asks him not to react angrily. Krish doesn’t let him trash her belongings. Kartik and Naira find them playing. They get mistaken that Kairav has accepted Krishna as his sister. They miss to see Kairav’s hatred towards Krishna. They decide to talk to Kairav later without breaking their play time. Krishna is much upset to face criticism from Kairav. There are light moments seen between Kartik and Naira. Devyaani and Bhabhimaa seek their help to plan Naksh and Kirti’s wedding anniversary. Kartik and Naira assure them that they will plan a surprise celebration.

Moreover, Naksh and Kirti decide to get divorced on their anniversary. Kirti is much sorrowful. Manish and Dadi discuss about Krishna’s adoption. They worry that Kartik’s decision will break the family. Vansh overhears them and passes the news to Kairav. Kairav is unhappy with the news of Krishna’s adoption. He feels distant from his parents. Kairav gets locked at home, while the entire family goes to celebrate Naksh and Kirti’s anniversary. Will Krishna come to Kairav’s rescue? Will she be able to win Kairav’s heart? Keep reading.

Reviewed Rating for this particular episode Yeh Rishta Kya Kehlata Hai 17th October 2020 Written Update Kairav displeased:4/5
This rating is solely based on the opinion of the writer. You may post your own take on the show in the comment section below.