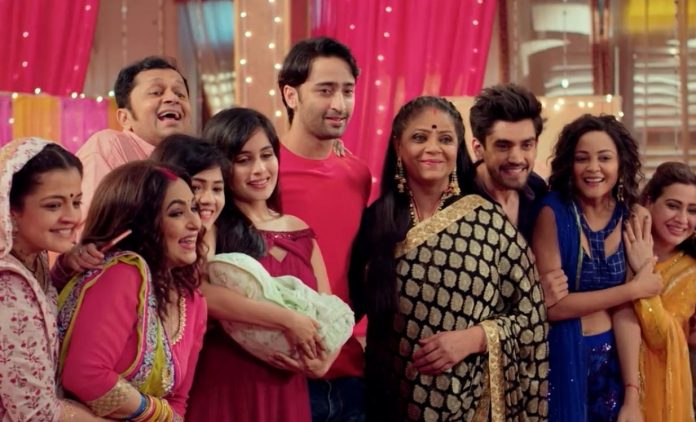 Yeh Rishtey Hain Pyaar Ke 17th October 2020 Written Update Happy ending moment In the last episode, we finally get to see some romantic moments between Kunal and Kuhu. Kunal tells Kuhu that they will name the baby Kunal. She disagrees. He tells that he doesn’t fight always. She praises his cute looks. She finds him perfect. Abir and Mishti also think of baby’s names. Mishti tells the baby that Abir is stubborn like Meenakshi. Abir sends Mishti away and spends time talking to his son. He wants his baby to just do his wishful.

He thinks Abir 2 will be a good name. Abir falls for Mishti once again on seeing her look stunning. Mishti surprises him with her traditional look. Abir gets helpless to get poetic seeing her beauty. They end up in a romantic moment. The family celebrates Dandiya night. Meenakshi and Parul are very happy to see the baby. Abir and Mishti are really happy to become parents. Meenakshi wanted to see this happiness on his face.

She has tolerated his annoyance for the sake of his happiness. Mishti prays that Abir and Meenakshi end their differences. Abir suggests Kabir as the name. Kuhu disapproves many names. Kuhu tells Abir that Meenakshi has got the gift for the baby. Mishti likes the gift. Abir doesn’t respond to Meenakshi. Mishti cheers up Meenakshi. The family gets into swinging mood. Abir doesn’t want to dance.

Kuhu ends up convincing Abir, Mishti and Meenakshi to come for the dance. Meenakshi finds the bulbs falling over the cradle. She tries to alert Mishti. Mishti gets busy on her phone. Meenakshi succeeds in saving Mishti and the baby as well. She gets injured in the attempt. Abir’s heart melts seeing her wounded. He calls for a doctor. Meenakshi gets treated for her injury. Mishti wants Abir to see Meenakshi.

Meenakshi wants to see Mishti and the baby. She has protected them. Abir doesn’t meet her. He feels bored thinking Meenakshi had planned the incident. He doesn’t like to trust her. Parul and Kunal ask Abir to trust Meenakshi. Abir fears that she will break his trust once again. He wants to stay alone. Mishti tells Abir that he has to forget the past and move on. She wants him to face truth, he is Meenakshi’s son and she can never let him go away.

She wants him to think as a parent, if not a son. She tells that he should leave his anger and unite with his mum. Mishti tells him that Meenakshi has always supported her by forgetting their issues. She asks him to the good side of Meenakshi. Meenakshi apologizes to the family for always doing wrong. She feels Abir doesn’t want to come to her. Abir checks on Meenakshi’s health without letting her know. The entire family wants to know if baby’s gold chain has come. Kunal tells them that he has got the gold chain, along with their coolest Nanu.

The family gets overjoyed to reunite with Nanu. Nanu welcomes the latest member in the family. He wants to be cool bro for the baby. The family missed him a lot. Meenakshi unites with her dad. She feels she needs his support in sorting the issues with Abir. Nanu congratulates her for becoming a grandmum. He tells that Kuhu has first right on the baby. Kunal presents the gold chain to the baby. Kuhu suggests the name Amish, by joining Abir and Mishti’s names. Everyone likes the name. Abir suspects that Kuhu has taken suggestion from Meenakshi.

He wants Meenakshi to name the baby if she has chosen the name. Meenakshi admits that she has named the baby Amish. Abir gives her the right to give the name to her grandson. Meenakshi gets happy that Abir has forgiven her. Meenakshi names the baby Amish, which means sincere. She wants Amish to become Abir. She apologizes to Abir. Abir too apologizes to break their barriers. The family finally have a moment of union. Meenakshi makes a buddy gang with Amish and her Bahus, just like Abir, Kunal and Nanu’s bro team. The family shares smiles.

Reviewed Rating for this particular episode Yeh Rishtey Hain Pyaar Ke 17th October 2020 Written Update Happy ending moment:4/5
This rating is solely based on the opinion of the writer. You may post your own take on the show in the comment section below.