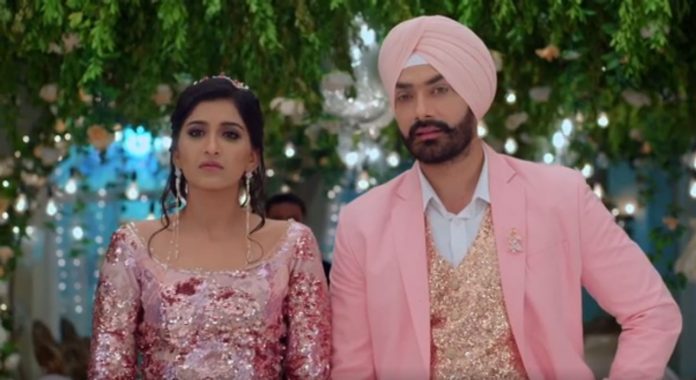 Choti Sardarni 18th October 2020 Written Update Meher gets good wishes from her family. Kulwant sees Vikram staring at Meher. She realizes he is Manav and hence behaving such. She gets too angry. She wants him to see just Aditi. She takes Meher aside to tell her about Manav. She tells that she wanted to tell her since a long time, that Vikram is Manav. Meher tells her that she knows it well.

Kulwant asks why did she allow Manav home. Meher tells that he is Aditi’s husband now. She asks Kulwant to stay out of her family matters. She doesn’t want any other drama. Kulwant tells that Manav didn’t tell his truth to anyone for a reason. She asks Meher if she knows the reason for it. Meher gets interested to know. Kulwant asks her to just see Manav looking for his parents. Manav takes care of Seema. He gives her medicines on time. Surya praises Vikram for being such a good son. Meher feels happy seeing Manav looking after Seema.

Moreover, Kulwant tells Meher that Seema didn’t see her son for 25 years, she is mistaken, Manav had lost his memory and now he got the memory back, but he will never hurt Seema by admitting his real identity. She thinks there is no threat for them. Seema blesses Vikram and Aditi to be happy. She wants them to keep talking. Manav asks Seema not to wish to stay ill. He is protective about her. Aditi tries to talk to him, but he avoids her. Meher doesn’t want their family to break. Harleen tells about Meher and Sarabjeet’s party arrangements done by Param. She gives him the credit for everything.

Param plans a lovely surprise for his parents. He presents a skit and reminds them their lovely memories. Manav gets enough of the drama. He goes aside to drink. Seema stops him from drinking a lot. She asks him to enjoy the party. She takes him back. He gets drunk. Harleen tells them that she is proud of herself that she chose Meher for Sarabjeet. She also likes Sarabjeet’s decision that he has married Meher. She thinks she has done right to unite them. Aditi worries seeing Vikram drunk.

Harleen feels lucky that Meher became a bahu of Gill family. Sarabjeet and Meher share about the one year journey. He tells them that he fell in love at first sight when he saw Meher at the Gurudwara. Meher tells that it was love at first sight for her when she saw Param. She didn’t know she will become Param’s mother. Sarabjeet tells that their relation is strong, their love has always got more and they will love each other more when they grow old. They have a funny moment when they play themselves in old avatars. They prove that their love will never get less for each other. Its a really hilarious moment to see their old age romance. The fun moments of Meher and Sarabjeet are seen.

Reviewed Rating for this particular episode Choti Sardarni 18th October 2020 Written Update Anniversary twist:5/5
This rating is solely based on the opinion of the writer. You may post your own take on the show in the comment section below.