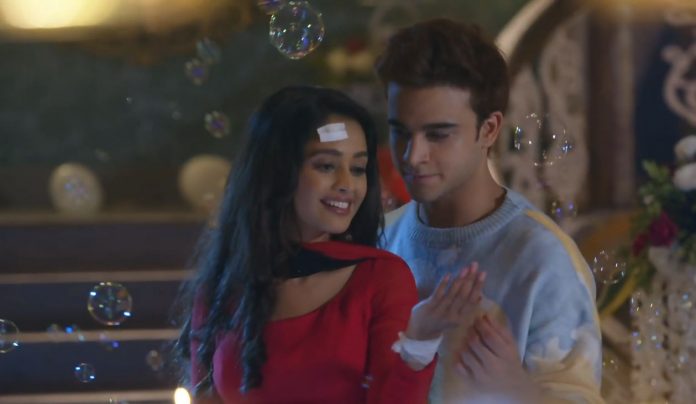 Kumkum Bhagya 21st October 2020 Written Update Ranbir gets slapped Pallavi is much affected by Rhea’s suicide move. Pallavi tells Dida that she will not believe any video. Aaliya tells Abhi that Rhea had tried to commit suicide because of Prachi. She accuses him. Abhi doesn’t know why Rhea did it. Aaliya tells that just Rhea knows it. She adds that Rhea lost Ranbir to Prachi and tries to end her life. Abhi is much upset to know this. Kohlis learn that Ranbir loves Prachi. Ranbir proposes Prachi.

He takes her permission for making her wear the ring, that will connect their hearts. Prachi feels love for him. He promises to never let their love fade down. Shahana likes his lovely proposal. She finds him very cute. Ranbir is about to put the ring on Prachi’s finger on their beautiful date. Pallavi calls him and asks him to come at the hospital as soon as possible. Ranbir and Prachi have beautiful moments, which breaks because of Pallavi.

Ranbir wants to know what happened. She summons him. Ranbir rushes to the hospital, leaving Prachi curious to know the matter. Ranbir tells Prachi about Rhea. She asks him to just take care of himself. He promises to come back and complete his proposal. Vikram consoles Pallavi. He tells that they have nothing in their hands. Pallavi tells that they know Rhea since childhood. She didn’t know that Rhea will set herself on fire and end her life.

He vents anger on his staff. Aaliya asks Abhi to vent anger on Prachi. Dadi asks Aaliya why didn’t she tell the matter to them before, Abhi could have stopped this from happening. Aaliya accuses him more, making him cry for his daughter. She tells that she wishes Rhea gets fine, but she will not let Prachi go free. She wants to teach a lesson to Prachi. Abhi feels guilty. Prachi wants to know why did Ranbir rush like that.

Shahana tells her that Rhea would not commit suicide, he would be doing a drama. She feels Rhea has planned everything. Prachi doesn’t think Rhea will intentionally do this. Shahana tells that Rhea’s love life will never have troubles. Prachi doesn’t want Shahana to make fun of Rhea. Prachi prays for Rhea. Pallavi wants Ranbir to break up with Prachi. She asks him never to meet Prachi again. She tells that they will break their ties with Prachi.

Pragya and Sarita shop sweets to meet Ranbir’s family. Pragya wants to ask Prachi if she wants to have this marriage or not. Sarita tells that Prachi will agree for the marriage, because of love. Pragya wants to have Prachi’s consent soon. She calls Prachi to ask her. Ranbir tells Pallavi that Prachi isn’t evil. He tells them that he was mistaken that they will take his alliance for Prachi. Dida stops him from saying anything. Ranbir doesn’t want the misunderstanding to grow. He tells that he loves Prachi and wants to spend life with her. Pallavi angrily slaps him. She disapproves Ranbir and Prachi’s alliance. Dida knew that Ranbir loves Prachi and wanted to support him.

Reviewed Rating for this particular episode Kumkum Bhagya 21st October 2020 Written Update Ranbir gets slapped:3/5
This rating is solely based on the opinion of the writer. You may post your own take on the show in the comment section below.