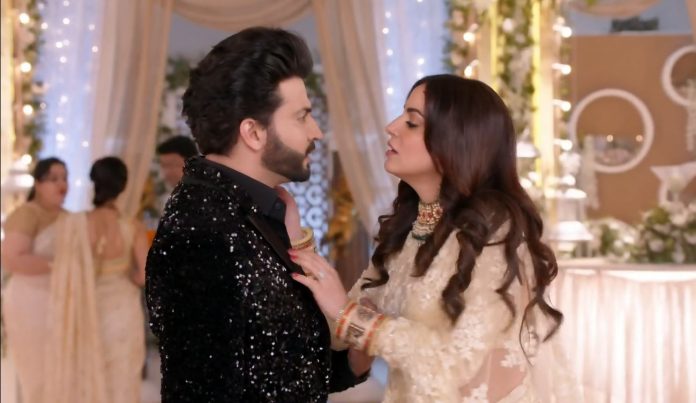 Kundali Bhagya 21st October 2020 Written update Preeta turns strong Ramona and Sanjana get into an argument. Sanjana asks her to teach some values to Mahira. Ramona defends her daughter. Sherlyn wants to stop Sanjana. Mahira overhears them. Sanjana tells that whoever supports Mahira will be in trouble. Mahira gets angered, while Sherlyn follows her. Preeta attends the guests with respect. Rishabh finds Karan looking at Preeti and teases him. Karan tells that he was just thinking about the dance performance. Rishabh asks him to admit his feelings.

Karan admits that Preeta has depth in her eyes. Karan jokes making Rishabh laugh. Preeta is thankful to the police for supporting her. She lies about her injury. Shrishti asks Preeta why didn’t she tell truth to the police. Preeta tells that he has no evidence against Mahira. She wants evidences in her favor. Karan wants to know where did Preeto go.

Mahira gets heartbroken. Karan asks Preeta what is she trying to do. Preeta scolds him for dancing closely with Mahira. Karan tells her that Mahira told about the letter, how Preeta eloped with Prithvi. He knows she can never leave him this way. He wants to know the matter. The family also wants to know about Preeta’s disappearance, which led to the big mess. Preeta lies to them. She tells them that she went to have fresh air, she fainted and got hurt. She tells that she feels suffocated because of Mahira. Rakhi wants Mahira to leave the house.

She realizes Sarla was right. She addresses the guests. She tells them that the family will conduct the function once again. Rano gets happy with Rakhi’s announcement. Mahira finds it unfair. She tells that Karan broke her heart. Karan tells her that he respects her, he knows her conspiracy that she planted that fake letter. He asks Mahira not to come between them. Preeta relieves Sarla from tension. Sarla blesses her.

Preeta tells that nothing can go wrong now. She advises Sameer not to tell anything about her kidnapping. Moreover, Karan feels Preeta has snatched his room. Rishabh tells that women has half share on their lives. He asks Karan not to argue with Preeta. Karan tells him that Preeta didn’t tell the reason for her disappearance, she is hiding something.

He tells that Mahira had worn the same saree as Preeta’s saree, as if she had planned it. Karan asks Sameer about Preeta’s outing. Sameer doesn’t tell them anything. Rishabh tells that Shrishti always tells him everything. They question Sameer. They want Sameer to just share it with them. Sameer lies that he doesn’t know anything. Rishabh finds him lying. Sherlyn is raged that she failed to keep Preeta away from Luthra house. Preeta gives her an answer. She threatens to get her arrested. She gets strength from her surname. She tells that she has become Karan’s wife now. She loves the family and the surname. She warns Sherlyn against any wrong activity now.

Reviewed Rating for this particular episode Kundali Bhagya 21st October 2020 Written update Preeta turns strong:3/5
This rating is solely based on the opinion of the writer. You may post your own take on the show in the comment section below.