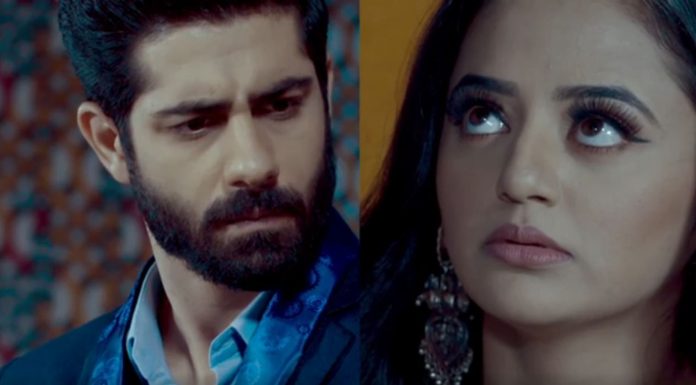 Ishq Mein Marjawan 22nd October 2020 Written Update Aryan attempts to kill Riddhima Riddhima finds the memory card with a hope to see Aryan in the footage. There are cute moments between Riddhima and Vansh. He tells her that he has to leave for urgent work and will return in the morning. She thinks it will be a good chance to check the footage in the laptop. He prepares a tetanus injection to cure her from septic. She is scared of the injection. She doesn’t want to take it.

He finds a way to romance her and keep her engaged, until he administers the injection. She screams on realizing it. She expects him to romance her. They have a special time. Vansh hugs her. He wants her to just confess love. Riddhima checks the footage again. She is close to surety that Aryan had killed Ragini. She just wants to see Aryan’s face in the footage. She rushes to use Vansh’s laptop once again to check the video. She is shocked to see Vansh in the video. She can’t believe her eyes that Vansh was threatening Ragini. Vansh is angry on her, but melts his heart on getting into an unexpected romantic moment with Riddhima.

Riddhima decides to check the footage after Vansh goes for his work. She realizes he left with Angre. She takes his laptop to play the footage. Vansh returns home only to find her watching the footage. Riddhima tries to know about Aryan’s crime. She is shocked to see Vansh around. Vansh’s presence shocks her. Moreover, his anger filled eyes and the gun in his hand looks a scary sight.

Vansh questions her about the footage in a rude tone. Riddhima feels answerable, but remains silent. Vansh takes over the laptop to check it himself. Riddhima remains calm and tries to mislead him. She wants to show him the footage after getting certain about the truth. She wants Vansh’s innocence to get proof. She hides the fact from Vansh that whatever she is doing it for his sake. She wants to find the entire truth behind Ragini’s mysterious death.

Riddhima looks into his eyes only to believe him further. She has given her heart to him. She has seen him in the footage, but doesn’t believe that he can kill Ragini. She believes that he just threatened Ragini, and someone else killed her. She wants to know what made Vansh so raged that he pointed the gun at Ragini. She doesn’t want any other doubt to come in her mind.

Riddhima and Vansh continue to spend time. He informs her that he will be home, since his meeting got cancelled. Vansh also holds the same feeling of love for her. He has got over Ragini’s chapter. Aryan had committed a crime in the past. It gets revealed that he was the third person in the godown that day when Vansh was threatening Ragini. Aryan had shot the video to frame Vansh in the murder case. It has to be seen if Aryan had killed Ragini by shooting her down. He is afraid that Riddhima will reveal his crime to Vansh. He wants Chanchal to help him in getting back the memory card from Riddhima.

He doesn’t want Vansh to see the footage, else it will be his end. Chanchal wants her son’s safety. She supports him. Aryan goes to stab Riddhima to finish the entire game. He doesn’t want Riddhima to expose his truth with the help of the footage. Aryan tells Chanchal that he will kill Riddhima, but she stops him in the final moment. Anupriya informs Kabir about Riddhima working on their motives.

She is glad that Riddhima had found the memory card and will soon bring out the truth behind Ragini’s murder. Kabir calls up Riddhima, but she ignores his calls. He messages her to ask for any proof against Vansh which proves him as Ragini’s murderer. He requests her to help him get rid of his suspension orders. Riddhima doesn’t want to tell him anything since she just knows half truth. She still has to find Ragini’s murderer.

Kabir isn’t much happy knowing Riddhima has changed because of Vansh’s love. He is much angry that she is deceiving him, she is lying to him. He wants to remind her that he has sent her to VR mansion for his purpose and now she is acting smart. He wants to tell her that her love for Vansh will kill her. He controls his temper. He shares his frustration with Anupriya. He tells Anupriya that Riddhima’s intentions have changed, she has found the evidence just to prove Vansh innocent, she will not take any step against Vansh. He tells Anupriya that they have to make a bigger plan against Vansh. He feels Riddhima is useless for their plans.

Riddhima and Vansh get into a moment once again, which brings them much closer. Chanchal and Aryan plot a game to divide Vansh and Riddhima. Vansh gets angered to see a note regarding Ragini. He suspects Riddhima is up to some spying game again. He turns angry on her. Riddhima is clueless about the unknown sender of the note. Will Vansh know her finding? Will Kabir manipulate Riddhima by planting fake pictures of Vansh killing Ragini? How will Kabir get the game in his favor? Will Riddhima lose her faith on Vansh’s love? Keep reading.

Reviewed Rating for this particular episode Ishq Mein Marjawan 22nd October 2020 Written Update Aryan attempts to kill Riddhima :5/5
This rating is solely based on the opinion of the writer. You may post your own take on the show in the comment section below.