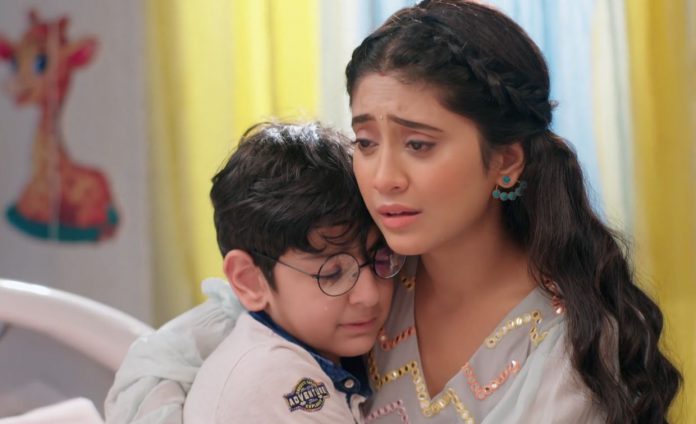 Yeh Rishta Kya Kehlata Hai 22nd October 2020 Written Update Kairav’s command Dadi wants to celebrate Akshara’s homecoming in a grand way. She is glad that Akshara cured Manish. The family wishes that Akshara makes another miracle. Naira tells that Akshara is special. Gayu takes a stand for Vatsal. She is fed up of the family calling Akshara lucky and ignoring Vatsal. She wants them to give importance to Vatsal as well. Naira wants to talk to Kairav and convince him.

Kartik tells her that they will soon tell him that they signed the adoption process. Krishna feels tensed to tell Dadi about her gift for Akshara. Dadi doesn’t respond to her. Nairra keeps Krishna’s wish. She is touched by the emotional gesture. Kartik and Naira want Dadi to keep Krishna’s wish. Dadi reprimands Krishna in an insulting way. Naira finds Krishna heartbroken.

On the other side, Kairav too dislikes Krishna and wants her away. Kairav tells that his parents aren’t listening. Krish shares the bad news of his parents’ divorce. Vansh tells them that Samarth doesn’t love him, like Kartik likes Kairav. He feels parents love elder kids less. Kairav doesn’t want to lose love of his parents. Kairav is upset that he is losing importance. Krish tells Kairav that Kartik and Naira love Krishna more than anyone else.

Vansh tries to cheer up Kairav. Kairav wants to be the special child. He wants to talk to Kartik and Naira. He feels bad to see Krishna getting all the love and attention. He gets more and more insecure. Naira plans a surprise for Kairav. A misunderstanding gets created between them. He doesn’t know that Naira is just cheering up an upset Krishna. He misses his good moments with his parents. Naira awaits Kairav for long. Kairav meets Manish and breaks down.

He also misunderstands Kartik’s intentions. Naira rushes to handle Kairav. Manish and Dadi get after Kartik to explain him that he shouldn’t adopt Krishna. They want Kartik to fill Kairav’s life with happiness. Kartik explains Manish about his marriage with Suwarna. He felt the same that he had lost his dad to someone. He was expected to adjust and understand Manish. Naira hugs Kairav and apologizes. Kartik wants Manish to understand his state. He apologizes beforehand to explain his state of mind.

He reveals that he didn’t know about relations and was much angry on his dad’s decision. He finds Manish’s decision to marry Suwarna right. He wants Manish to not blame him and trust his decision. He knows Kairav is special for him, he will soon understand his decision. He asks Manish if his love got less when he left away.

He also wants to love Kairav the same way and win his heart. He doesn’t want to get scared of Kairav and spoil Krishna’s life. He reveals how Krishna fell into trouble before. He sees his eldest child in Krishna. He feels Naira and he lost their first child, and relate her with Krishna. He makes the family emotional. Kairav doesn’t want to share his parents. Naira tells him that they love him the most. He demands her to leave Krishna. Kartik struggles to convince Krishna. He tells that Krishna is really sent by God.

Manish doesn’t want him to turn great. Kartik tells Manish how Krishna took care of him when he was suffering from a mental illness. He wants to return the love to Krishna, who always gave them love. He begs Manish and Dadi to understand his situation. He wants to teach Kairav to become a right person by setting a good example. He wants their support. He doesn’t want to send Krishna to fight with the world alone. Manish asks Kartik to shelter Krishna, but not by adoption.

He doesn’t want to give Goenka surname to Krishna. Naira struggles to convince Kairav. She explains him Krishna’s helpless situation. She asks him to understand Krishna’s need for parents. Kairav asks her to support Krishna, but not adopt her. Naira gets into a fix. How will Kartik and Naira convince the family? Keep reading.

Reviewed Rating for this particular episode Yeh Rishta Kya Kehlata Hai 22nd October 2020 Written Update Kairav’s command:3/5
This rating is solely based on the opinion of the writer. You may post your own take on the show in the comment section below.