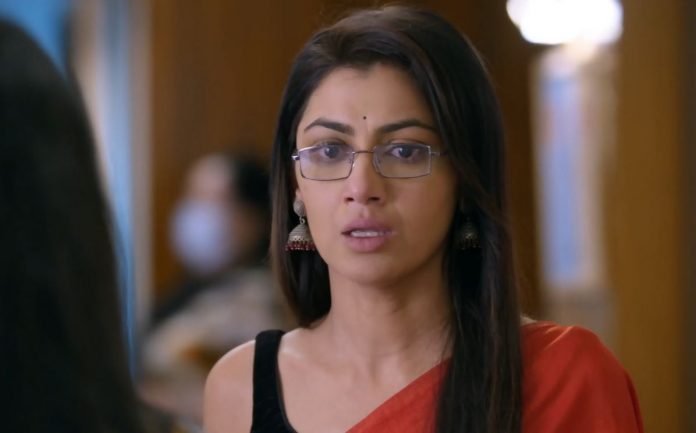 Kumkum Bhagya 24th October 2020 Written Update Pragya rages at Abhi Pragya and Sarita meet the pandit at the temple to ask his advice about Prachi’s alliance. He tells them that Prachi’s stars aren’t in her favor, they shouldn’t talk about the alliance right now. Pragya doesn’t believe it much. Sarita asks her to postpone the talk for a day. Pragya calls up Ranbir and informs him about the Shagun ritual. She tells him about Pandit’s words for Prachi’s Kundli.

Ranbir’s voice doesn’t reach her. Ranbir gets hindered by Pallavi. Pallavi snatches the phone. Pallavi doesn’t want Ranbir to think of marriage. Pragya and Sarita come home after shopping the Shagun items. They call up Prachi to show her the items. They find the door locked. They wonder why did Prachi lock herself, when she never does. They meet Prachi and ask the matter. Prachi breaks down. She tells Pragya about Rhea’s suicide attempt.

She tells that Rhea had committed the suicide because of her. Pragya asks her not to think so. Prachi tells that Rhea felt Abhi doesn’t love her, and even she lost Ranbir. Prachi reveals that Abhi came to warn her. She tells that Abhi accused her and asked her to stay away from Rhea and Ranbir’s lives. She tells that he doesn’t want a daughter like her, she isn’t a good person, her dad would have been ashamed of her, because she has provoked someone for suicide.

Pragya cries seeing her in tears. Prachi doesn’t want to stay in the city and let down Abhi, whom she respects a lot. Prachi tells that Abhi has called her a fraud. On the other hand, Aaliya tells Vikram about the company manager’s call regarding the sudden raid. She wants to go to the office. She tells that Abhi should come to the factory since the matter is serious. Rhea makes Dimpy lie about Prachi. She acts to gain Dida’s sympathy.

Dida scolds her for not thinking of anything. She loves Rhea a lot. Dimpy lies about Prachi to Dida. She tells that Prachi had always wanted revenge on Rhea. Dida thinks if everyone is lying about Prachi. She doesn’t think everyone can lie. She doubts Prachi. Pragya consoles Prachi. Sarita can’t believe that Abhi can scold Prachi like this.

Pragya doesn’t want to spare him. Prachi asks her to stop it. Pragya doesn’t want to tolerate anyone’s taunts, if Prachi’s father is not along with them. She tells Prachi that she will talk to Abhi. Prachi defends Abhi to calm down Pragya. Pragya wants to keep Prachi’s self esteem. She wants Prachi to message Abhi and call him to meet. She wants to teach him a lesson. She counts her favor that she didn’t send Rhea to jail. Prachi gets worried.

Pallavi wants Ranbir not to have any terms with Prachi. Ranbir asks them not to misunderstand Prachi. He tells them that Rhea has done wrong with Prachi always. The family gets angry when he feels they don’t love him. Ranbir defends Prachi. Pallavi accuses Prachi for breaking their terms. She falls sick. Ranbir takes Pallavi home. He is upset that his parents are against Prachi. Pragya goes to meet Abhi. Aaliya gets to see her on the way. She doesn’t want Pragya to come into their lives. Ranbir and Pallavi get into a bitter argument. She wants him to forget Prachi.

Reviewed Rating for this particular episode Kumkum Bhagya 24th October 2020 Written Update Pragya rages at Abhi:4/5
This rating is solely based on the opinion of the writer. You may post your own take on the show in the comment section below.