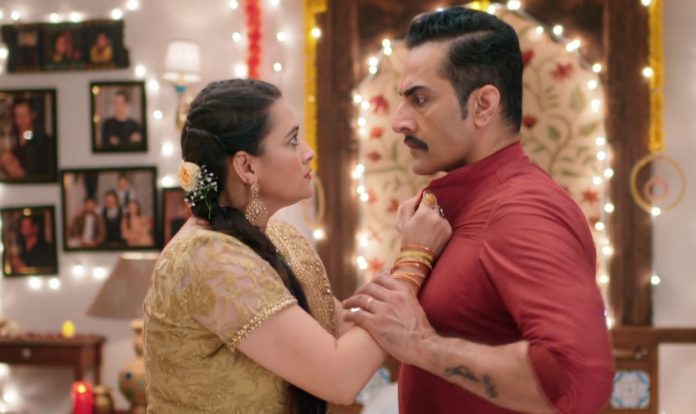 Anupama 24th October 2020 Written Update Devika Vanraj clash Vanraj is super tensed recalling Anupama’s violent outburst. Devika confronts Vanraj for his affair and cheat. She asks what did Amnupama see in the bedroom that she got so much shocked. She wants to know if Anupama caught him red-handed. She tells him that she had warned Anupama before, but Anupama didn’t believe her. She thinks she was right since ever.

She is upset that Anupama’s trust broke. She knows he will never say the truth. She warns him again. She tells that she will expose his truth to the family and ruin his life, just like he ruined Anupama’s life. Pakhi, Samar and Paritosh want Anupama to break her silence and talk to them. Kavya wants to know about Anupama. Nandini is clueless.

Nandini also wants Kavya to tell whatever happened. Kavya gets scared to admit the truth. She admits that she was having a weak moment and fell into Vanraj’s arms, which Anupama witnessed them together. Devika finds Kavya disgusting. Nandini feels ashamed of Kavya. She asks Kavya how could she cheat Anupama’s trust when the latter gave her so much love and respect.

The family wants to get Anupama treated. Her condition makes the family more worried. Bapu ji gets stressed. Vanraj looks for his medicines. Baa tells that just Anupama knows about his medicines. Vanraj realizes Anupama’s worth. He gets Kavya’s call and vents anger on her. She informs him about Devika’s threatening. She tells that Devika learnt their truth. Vanraj shouts on her for not using her mind. He can’t handle everyone at once. He asks her to come home and tell the truth to his parents also. He accuses her for creating the drama.

He knows that Devika and Sanjay won’t spare her. Devika tells Vanraj that she will not get quiet. Vanraj gets tensed when Devika holds his collar. She reprimands him for crossing limits of shame. She is quiet to lessen the tension in the family. She doesn’t want to bring shame for them by revealing his truth. She wants Anupama to get fine and tell the truth herself. Vanraj is badly stuck.

Vanraj feels cursed that he is troubled so much because of his love. Baa imagines Anupama in the kitchen. She misses Anupama. She wants Anupama back to normal. The family misses Anupama and shed tears for her. Vanraj too misses Anupama. He didn’t think his cheat will shatter her. He was thinking he can easily fool her with his love. He didn’t know that his love has become her entire life. Kavya also feels guilty thinking of Anupama’s bad condition.

Anupama is troubled with the sight of Vanraj and Kavya’s intimacy. She meets Vanraj to confront him. He tries to win her trust again. She doesn’t get into his words. She wants to decide about her marriage, her relation and her life. She scares Vanraj and oust him from her life.

Reviewed Rating for this particular episode Anupama 24th October 2020 Written Update Devika Vanraj clash:4/5
This rating is solely based on the opinion of the writer. You may post your own take on the show in the comment section below.