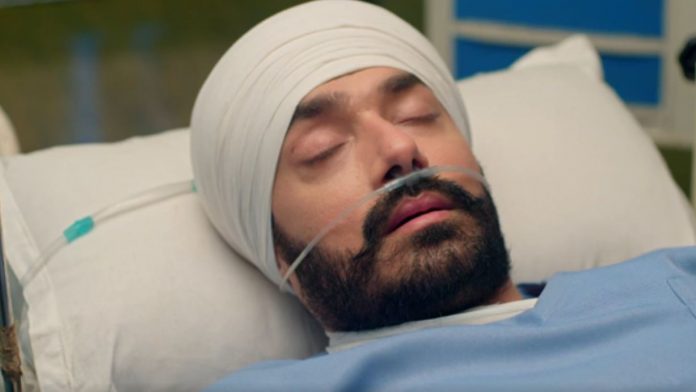 Choti Sardarni 24th October 2020 Written Update Sarabjeet dies? Meher is terrified with the uncertainty that Sarabjeet will safely return to her after fighting with the death. She asks the doctor about Sarabjeet’s condition. She wants to know if Sarabjeet is stable or not. The doctor explains her the situation which is really worse and dangerous for Sarabjeet. He tells that the bullet is stuck in Sarabjeet’s spinal cord, and the surgery can cost his life. He tells that they are trying to remove the bullet, but Sarabjeet may die. Sarabjeet gets treated by Aditi and other doctors team.

Sarabjeet loses his pulse. This brings a moment of tension for Meher. Sarabjeet has to fight for his life. Aditi goes to tell Meher about his condition. On the other hand, Vikram is helpless to hide the truth that he is Manav for the sake of Seema, else he would never spare Kulwant and her evil sons. Manav wants to find the real culprit behind Sarabjeet’s state. Will Meher be able to revive Sarabjeet to life? Keep reading for a detailed update soon.

Manav investigates the case. He gets two guns from Sarabjeet’s house. He sends the ancestral gun for the forensic tests to know the truth. He hopes to get the fingerprints. He sends his team to the hospital to get the fingerprints of all the family members. Meher learns about Manav’s investigation. The family members refuse to go, since they didn’t shoot Sarabjeet. Vikram’s assistant Manish requests them to cooperate with the CBI. Kulwant is ready to give her fingerprints. She blames Vikram again.

Manish tells that Vikram has already given his fingerprints, he wants to bring out the culprit. Sarabjeet’s critical state doesn’t let Meher find peace. Meher stays awake all the night. Doctor looks for her. Meher meets him to know about Sarabjeet. She wants to know the actual state. He tells her that the surgery has to be done as soon as possible, but still he can’t guarantee his survival. He tells the other way that’s to leave the bullet in the spinal cord itself, but it might push Sarabjeet to coma. He tells that the surgery can take Sarabjeet’s life if they remove the bullet.

He feels both the options are tough. He asks her to take the tough decision by choosing one option. She gets tensed. She doesn’t know what will be better, to leave the bullet in the cord or remove it by taking bigger risk. Meher recalls Sarabjeet’s love confession. She feels horrible seeing the consent form. Param speaks to her to encourage her.

He asks her to close her eyes and follow her heart’s decision. He wishes that she stays strong. He guides her into taking the decision She asks the doctor to remove the bullet even if it risks Sarabjeet’s life, since he will never choose to live in the state of coma. She tells that Sarabjeet is a tiger who will survive any danger. She wants to see him alive, not in any helpless state of coma. She makes prayers for Sarabjeet, recalling his generous deeds.

Manav sends extra security at the hospital for Sarabjeet, knowing the attacker is from the family. The family prays for Sarabjeet’s life. The suspected members go to the CBI office and give their fingerprints. Manav tells them that he can make them admit the crime by his ways. He asks them to make the confession without any torture. He asks Robby and Kulwant to admit the crime if they have shot Sarabjeet. Robby tells that fingerprints can’t prove anything. Manav asks Kulwant to help the police in finding the truth. Kulwant tells that CCTV footage will prove the culprit. Jagga also feels the same.

Manav didn’t think of the CCTV footage. Kulwant asks him to check the footage if he dares. She tells that he maybe caught too. Jagga also accuses Vikram. Manish tells that CCTV camera wasn’t working, the culprit had damaged the camera beforehand. Manav tells that the culprit is very clever.

Kulwant tells that he is the one who is cleverest. Manav doesn’t want anyone to be more clever than him, since he doesn’t want them to escape. He doesn’t let Kulwant to leave. Doctor informs Meher that the surgery is done, but Sarabjeet is in need of blood. Meher wants to arrange the blood some how. Doctor asks her to try at the earliest. Meher leaves on her search.

She finally arranges blood by much difficulty. She rushes back to the hospital. Sarabjeet fights for his life. Meher gets worried when her car fuel gets over. She seeks help from a person. She borrows the scooty and leaves for the hospital. Sarabjeet’s good deeds make him win blessings from many people. Meher hopes that he stays strong until she reaches.

She gets the blood and passes to the doctors’ team. The bottle falls down and her efforts go in vain. Meher cries seeing the blood wasted. Manav reaches the hospital to see her. She wants him to donate blood to Sarabjeet. Manav refuses to donate the blood since Sarabjeet has snatched Meher from him. Meher pleads him to save Sarabjeet’s life. Will Manav agree to help Sarabjeet and save his life? Keep reading.

Reviewed Rating for this particular episode Choti Sardarni 24th October 2020 Written Update Sarabjeet dies?:4/5
This rating is solely based on the opinion of the writer. You may post your own take on the show in the comment section below.