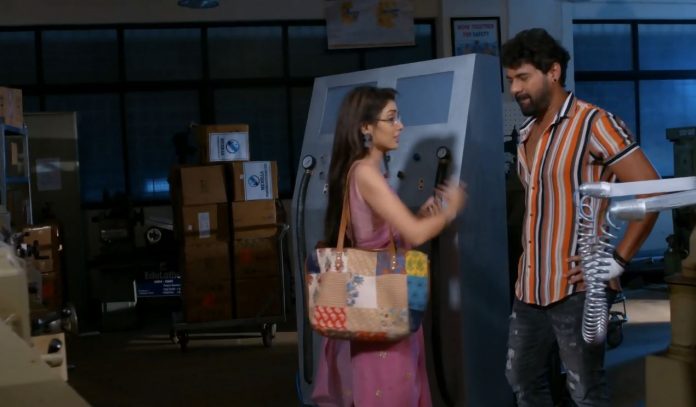 Kumkum Bhagya 27th October 2020 Written Update Abhi Pragya unite Abhi and Pragya finally come face to face after many obstacles. Aaliya hits Pragya’s cab to kill her. The people surround her and scold her for the accident. Aaliya tells that she can take the victim to the hospital. The people agree and send the lady with Aaliya. Aaliya gets a shock to see some other lady instead Pragya. She didn’t realize that she missed Pragya.

She wants to know where did Pragya go. Pragya reaches the factory to meet Abhi. She takes Abhi’s car keys so that he doesn’t go anywhere. Aaliya pays the man and asks him to take the lady to the hospital. Aaliya thinks she has made a mistake.

She didn’t know her plan will result into this. She doesn’t want Pragya and Abhi to unite. She thinks to lie to Abhi about Rhea’s complications. She calls Abhi and fails to reach him. She calls the factory number. She learns that no one has come to meet Abhi. She asks Manish to send away Abhi as soon as possible. She commands him to switch off the main lights in the factory. She asks him not to let any lady meet Abhi. Manish doesn’t understand what she meant.

Manish finds Pragya coming to meet Abhi at the factory. He requests her to stop. He wants to at least switch off the lights so that Pragya doesn’t meet Abhi. Pragya and Abhi meet in the machinery department when the power goes off. Pragya sees Abhi and asks him to stop. Abhi recognizes her voice. She tells him that she is Prachi’s mother. She doesn’t want him to go away by making any excuse. She has met him after a long time. He recalls the bad separation.

He realizes that he has broken ties with Prachi, who is really his daughter. The memories get flashing in front of his eyes. He cries realizing Prachi is his daughter. He feels so sorry. Pragya doesn’t see his face. She scolds him for not being fair towards Rhea and Prachi as well. The raid ends. The officers leave. Aaliya reaches the factory and hits the officer’s car. The officer stops her. Aaliya commands him to leave from the factory.

She tells that Prachi’s dad isn’t with her because of the situation. She doesn’t want him to comment on Prachi’s father. She defends her husband. She is proud of her values. She feels Abhi didn’t give love to Rhea and made her bitter. Abhi feels he has lacked in giving a good upbringing to Rhea. Pragya tells that Prachi was crying just because he was heartbroken. She reveals Rhea’s crimes to Abhi. Abhi is shocked to know it.

The officer threatens Aaliya. Aaliya gets enraged. She wants to find Abhi and take him away. Manish asks Aaliya if there is any problem. He informs that he couldn’t stop the lady from going to Abhi. Pragya tells that she has the confession of the truck driver, who was sent by Rhea. She admits that she has slapped Rhea, who was just insecure with Prachi. She tells that its Rhea’s mistake, its mistake of his upbringing, he didn’t give security to Rhea.

She tells that she had spared Rhea and didn’t take any legal action against her, knowing she is selfish and arrogant. She tells that she feels some connection with Rhea, she shares a strange bond. She reprimands Abhi for hurting Prachi by his taunts. She feels he can give his money but not give his love. She tells that no father can do wrong with a daughter, even if the relation is namesake. She asks him how could he hurt Prachi’s heart by saying bitter things.

Abhi understands her pain. She sheds tears. Pragya warns her. Aaliya asks Manish not to let the lights get on. She threatens to fire him. She wants Abhi and Pragya’s misunderstanding to stay between them. Pragya tells Abhi that she is glad that he isn’t Prachi’s dad. She feels he has broken the illusion of a good person. The lights get on. Pragya and Abhi get to see each other’s face. Pragya can’t believe that he is Mr. Mehra, Rhea’s dad, who she didn’t meet until now. Her anger melts in a moment when she sees him. They both break down into tears of happiness.

Aaliya worriedly reaches them. Pragya asks Abhi is he Rhea’s dad. He tells Pragya that he is Rhea’s dad, Mr. Mehra. He didn’t know that Prachi is her daughter, their daughter. Pragya gets happy to know that Rhea is her daughter. They both regret to break the hearts of their daughters. Aaliya finds them together. She is upset that they have united. Abhi and Pragya share their happiness. They fail to express their emotions. Aaliya overhears their conversation. He feels he isn’t a good father. He tells that Rhea is stubborn, but good at heart. Aaliya wants to make them against by using their love for their daughters.

Reviewed Rating for this particular episode Kumkum Bhagya 27th October 2020 Written Update Abhi Pragya unite:5/5
This rating is solely based on the opinion of the writer. You may post your own take on the show in the comment section below.