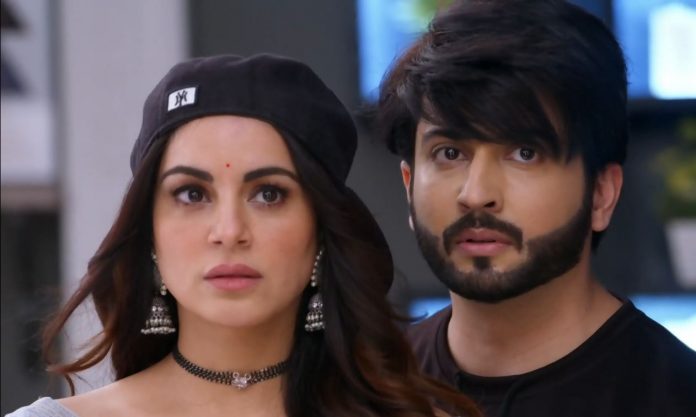 Kundali Bhagya 27th October 2020 Written Update Karan accepts Preeta Preeta and Karan’s funny banter goes on. She scares him by revealing some of her abnormal activities at night. Karan loses his sleep. Preeta has ousted Mahira from her house with the help of Rakhi. Kareena meets Sameer to threaten him. She wants him to away from Shrishti. He tells that he wasn’t getting friendly with Shrishti.

She tells him that dislikes Shrishti, he can’t be romantic with her. She tells that he should do his work for which he has come. She shouts on him. She finds him getting Shrishti’s call. She disconnects the call. Shrishti realizes Kareena is with Sameer that he isn’t answering. She worries for Sameer. She doesn’t think Kareena should come between Sameer and her. Sarla takes care of Shrishti. She wants Shrishti to sleep.

She knows Shrishti is innocent. She wants her to be away from Luthra family. She thinks Shrishti’s fate should be like Preeta’s fate. She knows Preeta will be fighting a lot to get her in-laws’ support. She regrets that even Karan doesn’t support Preeta. She feels Preeta is all alone there. She prays for Preeta to get strength to fight for her rights. Karan sleeps with much difficulty.

He wakes up in the middle of the night to care for Preeta. He switches off the AC on seeing her feel cold. He knows Preeta always fights with him. He vents his frustration. He falls for her, seeing her innocence on her face. Meanwhile, Rishabh wakes up and gets surprised to see Sherlyn behaving like a good wife. He wants her to give him time. He tells that he doesn’t want anything. Sherlyn tells that she just wanted to help. He wants to know about her absence at night. She had gone to meet Prithvi at night. She lies that she was with Mahira. Rishabh asks her to come with better excuses.

Preeta wakes up late and thinks Karan always puts her in trouble. She realizes he woke up and left, while she got late for the Mu Dikhai ritual. She hurries to leave. She finds Karan sleeping in the balcony.

She realizes that he had switched off the AC for her sake and went out to sleep. She gets glad seeing his care. She recalls their moments. Rishabh and Sherlyn get into an argument. Rishabh tells that she shouldn’t be with Mahira. He tells that Mahira is thinking wrong, she will put everyone in problem.

He asks her to think of herself and not get into problems. Sherlyn wants to get alert of Rishabh. She didn’t think he will notice her absence. She thinks if he is falling for her that he is alerting her of Mahira. She just wants to do what she wants. She wants to separate Karan and Preeta. She wants to support Mahira for her greedy motives. Preeta gets decked up for the Mu dikhai ritual. Karan gets mesmerized with her pretty look. He finds her murmuring. He goes to help her. He tells that he has come to help her to get saved from her madness. She admits that he loves her. They have a sweet moment.

Reviewed Rating for this particular episode Kundali Bhagya 27th October 2020 Written Update Karan accepts Preeta:4/5
This rating is solely based on the opinion of the writer. You may post your own take on the show in the comment section below.