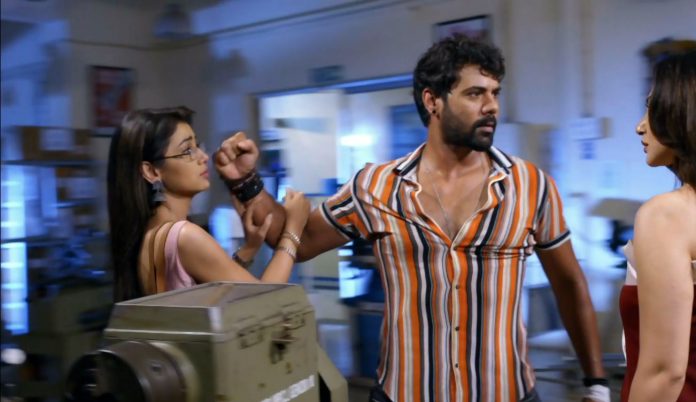 Kumkum Bhagya 29th October 2020 Written Update Abhi gets brainwashed Abhi calls it enough when Aaliya accuses Pragya further. Aaliya tells so wrong things that Pragya breaks down. Pragya wants to defend herself, but falls in Aaliya’s trap of words. Aaliya tells that she has equal right on Rhea, she will not shut up when its about Rhea. She tells that she loves Rhea as her own daughter. She doesn’t want Abhi to stop her now. She asks security to send Pragya out.

Aaliya fumes at Pragya who is the reason for all the disasters in their lives. She asks Pragya to leave if she loves Rhea. She tells that Rhea is nearly dying. She wants Pragya to spare Rhea forever. She pleads to Pragya. She tells that Abhi and Pragya aren’t destined to be together. She wants them to stay away if they want to keep their daughters safe. She asks the price for Rhea’s upbringing. Abhi doesn’t want Aaliya to manipulate Pragya. He tells that Pragya will not leave. He warns Aaliya.

Aaliya thinks she has won, since Pragya is leaving. Pragya leaves silently, agreeing to Aaliya’s words. Security makes Pragya out and shuts the gate, while Abhi is busy arguing with his sister. Pragya misses Rhea. She breaks down thinking of Aaliya’s accusations. Abhi looks for Pragya. Aaliya asks him to let her go. He doesn’t want to let Pragya leave. He wants Aaliya to remember her limits. She tells that Rhea hates Prachi and Pragya. She wants him to let them stay away. She asks her how did she lie.

Abhi wants Aaliya to leave him alone. She tells that Pragya chose Prachi when she knew the differences and hatred between her daughters. Abhi gets brainwashed by Aaliya. Pragya cries and tries to inform Prachi that Rhea is her daughter. She goes to the hospital to see her daughter Rhea. He wants to know where is Pragya. He learns that Pragya had left. He thinks Pragya is soft-hearted and couldn’t tolerate the sharp blames.

Moreover, Pragya reaches Rhea and finds her sleeping. She feels shattered. She loves Rhea a lot. She gets emotional thinking of Rhea’s insecurity. She feels sorry to leave her daughter alone. She hopes Rhea forgives her. Abhi wants to find Pragya. He wants to meet Prachi and tell her that she can call him dad now. She regrets his bitter words to Prachi. He wants to see Prachi’s happiness on her face when he tells her the truth that he is her dad. He goes to Pragya’s house. He meets Prachi, who apologizes to him for hurting his heart. He also apologizes to her.

Reviewed Rating for this particular episode Kumkum Bhagya 28th October 2020 Written Update Abhi gets brainwashed:5/5
This rating is solely based on the opinion of the writer. You may post your own take on the show in the comment section below.