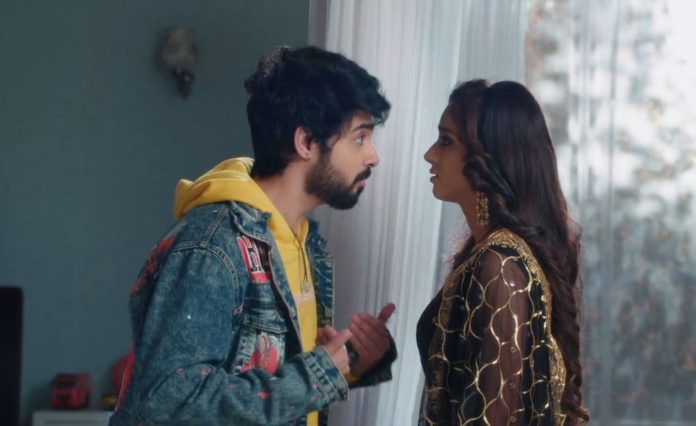 Yeh Hai Chahatein 29th October 2020 Written Update Rudra rages at Prisha Mishka gets worried. She decides to admit the truth that she had killed Kirti when Prisha corners her. Ahana tells that the earring belongs to her, as Prisha wants to hear it out. She later changes the statement and tells the family that Prisha has coked up the story when the earring belongs to her.

She clears Mishka’s name. She accuses Prisha for killing Kirti. Mishka gets relieved. She is thankful to Ahana for saving her. Ahana slaps Mishka. She demands the truth. She wants Mishka to answer why did she kill Kirti. She asks Mishka why was she finding the earring. Mishka wants Ahana to trust her. Ahana tells Mishka that she can understand everything. Mishka tells that she didn’t kill Kirti, but she had gone there to meet Kirti. She swears to Mishka.

Rudra and Prisha get to hear Mishka’s confession. Prisha proves that the earring belongs to Mishka. She doesn’t want to blame Mishka, but save her. She tells that she considers Mishka as family. Mishka apologizes to Rudra. She feels sorry to lie. She admits that she didn’t kill Kirti even after a fight. She asks the family to believe her.

She tells that Kirti was murdered by someone. She doesn’t want anyone to blame her. Rudra asks Mishka why was she silent when she was expected to support him. Mishka admits that she was scared. She tells that she didn’t kill Kirti, someone was also there, who killed Kirti after she left. Balraj believes Mishka. He is disappointed with Ahana. He doesn’t want Ahana to blame Prisha all the time. He feels she broke his trust. Mishka feels sorry for Ahana.

Ahana wants to protect her sister. Prisha tries to find the truth from Yuvraj. She accuses him about killing Kirti. She tells that Mishka also went to meet Kirti, the footage was deleted by him. Yuvraj tells her that he has just see Rudra and deleted the footage. He acts ignorant about Mishka’s involvement. Prisha feels she is foolish to take his help. Rudra misunderstands Prisha when she calls him by Yuvraj’s name. He vents anger on Prisha and Yuvraj.

He catches Prisha’s lie. He accuses her for protecting Yuvraj from the murder case. He turns raged up. He angrily hurts Prisha. She tells him that she accidentally got to know everything. She wants to tell Yuvraj’s truth as well, but fell into Yuvraj’s words. She exclaims that she didn’t mean to hurt him. Rudra asks her to open her eyes, Yuvraj has killed Kirti. Prisha doesn’t think Yuvraj killed Kirti. He warns her against her drama.

He misunderstands Prisha. He doesn’t want to become a fool again by believing her. Prisha regrets that everything is going wrong. She informs her mother that everything is spoiling due to Rudra’s loss of trust. She wants to clear Rudra’s misunderstanding. Vasudha asks Prisha to show Neerja’s video to Rudra. Prisha regrets that Neerja met with an accident before handing over the pendrive. Vasudha wants her to meet Neerja and get the recording.

She believes that things will get fine once Prisha gets the video footage. Prisha meets Neerja and regrets her condition. Neerja wanted to help Prisha by going against Rahul. Prisha feels sorry. She wants Neerja to get fine and return to her baby. She is ready to bear Rudra’s hatred. She wants Neerja to get stable. Rahul reaches Neerja. He finds Prisha there. Neerja gets unstable. Rahul accuses Prisha. He stops her from hurting Neerja further.

Prisha defends her step. They get into a heated argument. He wants Neerja to recover from coma. He asks her to stop meeting Neerja and him. Prisha is stunned to find Sharda at the hospital. Rudra suspects Yuvraj and Prisha. Yuvraj further misleads him about Prisha and his affair.

Reviewed Rating for this particular episode Yeh Hai Chahatein 29th October 2020 Written Update Rudra rages at Prisha:5/5
This rating is solely based on the opinion of the writer. You may post your own take on the show in the comment section below.