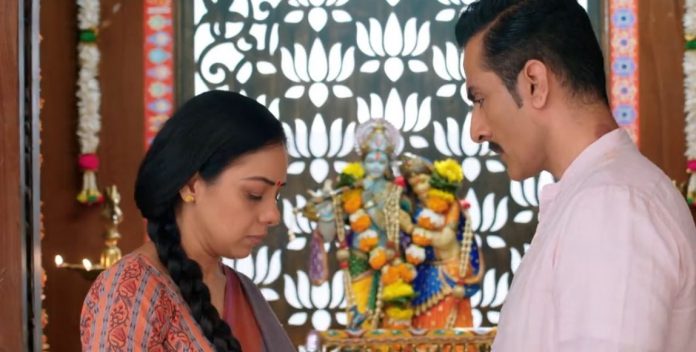 Anupama 30th October 2020 Written Update Vanraj is questioned Kinjal meets Paritosh and asks him about Anupama’s condition. She asks Paritosh about Vanraj and Kavya’s affair. She asks why didn’t he tell her before. He tells that there is nothing left between them now. He admits that Vanraj has told him the truth himself, since he is innocent. He feels his dad isn’t wrong. He tells that Kavya is after Vanraj being obsessed for him. She asks him to warn Kavya to stay away. She is also worried for Anupama’s future.

He learns about Vanraj’s affair. He is broken apart. Meanwhile, Kavya decides to leave Nandini’s house. Kavya is scared to face Anupama. Nandini asks Kavya why isn’t she telling the truth to everyone. Kavya stops Nandini from taunting her. She is worried for her life’s troubles. Vanraj calls Kavya. He is glad that she is leaving. He tells that he can come to meet her at her home. He wants her to go home. Kavya is happy. He tells that Anupama is giving him stress. She asks him to free Anupama from their marriage. He doesn’t think of divorcing Anupama.

He is troubled. Kavya leaves from the house. Anupama watches her. Kavya feels nervous on facing her. Paritosh fears Samar’s anger. Samar reaches Vanraj to reprimand him for his actions. Vanraj faces his wrath. Samar doesn’t want to believe him. He realizes that Vanraj was making a story to fool Paritosh. He tells that Anupama is selfless, while Vanraj is shameless.

He shows the big difference between his parents. Vanraj angrily holds his collar. He stops Samar. Samar tells that Vanraj is a big loser to lose Anupama’s true love. He asks Vanraj why did he cheat Anupama. He tells that Anupama would have left from his life if he expressed his wish to marry Kavya. He snatches Vanraj’s rights of a father. He doesn’t want Vanraj to call him son again. He wants to return all the pain to Vanraj. He wants Vanraj to realize that he will lose his children. He is ashamed to call Vanraj his dad.

He insults Vanraj in rage. Vanraj is shaken to hear his speech. Samar cries a lot thinking of Anupama. He goes to meet Anupama to do a son’s duty. He wants to help Anupama. Baa wants to find the reason for Anupama’s silence. She asks Vanraj about Kavya, who didn’t visit them after marriage. Devika tells Baa that Kavya isn’t sick, Vanraj can answer them about Kavya’s absence. Baa suspects Kavya’s involvement in Anupama’s matter. Vanraj lies that Kavya had called to ask about Anupama. He tells that Kavya didn’t come since its their family matter. He wants to go to meet Kavya on excuse of his work. Samar cheers up Anupama and gives her courage. Vanraj remembers Anupama’s words. He wants to get the situation in his control.

Reviewed Rating for this particular episode Anupama 30th October 2020 Written Update Vanraj is questioned:3/5
This rating is solely based on the opinion of the writer. You may post your own take on the show in the comment section below.