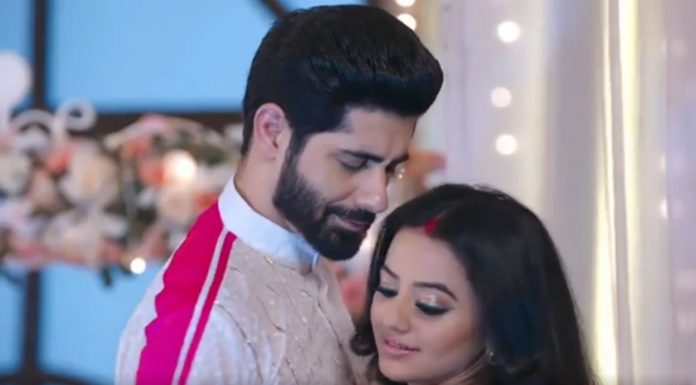 Ishq Mein Marjawan 2 30th October 2020 Written Update New shocker for Riddhima Vansh confesses his love to Riddhima. He gifts a special watch to Riddhima. He tells her that even if she loses the watch, she will never lose his love. He promises to always love her. He tells her that she will always live in his heart. They have a romantic dance. Riddhima makes it evident that she was dying to romance him and take their relation to the next level. She gets so mad in his love that she surrenders to him. Vansh and Riddhima’s romance performance is something to watch out for. Riddhima prepares for her first Karwachauth for Vansh.

She is all happy, until the moment when she goes to see Vansh’s face after the moon sighting. She finds Vansh shooting someone. His face gets covered with the blood, much to Riddhima’s shock. She witnesses his crime and realizes that he is really a murderer as Kabir told her. She gets against Vansh again.

Kabir has planted this huge misunderstanding to ruin Riddhima and Vansh’s beautiful relationship. Kabir has kept his promise to ruin Riddhima’s happiness. He plays a dirty game again with the help of Anupriya. Whom has Vansh shot? Is this Riddhima’s dream or the reality? Is Vansh testing Riddhima’s faith by this act? Keep reading to find out more.

We get to see the family politics in Vansh’s mansion. Vansh arranges the Sargi for Riddhima when Anupriya drops the sargi intentionally to keep Riddhima hungry. Riddhima gets happy that Vansh didn’t let her stay hungry and brought the Sargi. He didn’t let any bad omen occur and saved her. Later, we get to see some good moments between Vansh and Riddhima. He cares for his fasting wife and wants her to eat something while everyone is away.

She wants to keep the fast for him with sincerity. She doesn’t eat anything in the day time. Vansh stays with her like a shadow. Ishani and Anupriya try to create troubles for Riddhima so that Dadi gets upset with her. Riddhima decides to keep a story narration of Karwachauth. She gets targeted by her in house enemies again. She loses her voice by the chemical smoke when she lights the diya.

She gets worried that it will be a bad omen once again. Dadi fears that Riddhima and Vansh are facing the problem because of their fate. She is worried because of the pandit’s Kundali prediction for the couple. Vansh doesn’t let any bad omen affect Riddhima. He comes to her rescue once again when she loses her voice. He completes the Karwachauth story narration with much love for his wife. He does his duty towards his wife, who is staying hungry all day just for his long life. Vansh tells her that he can’t see her hungry. He is ready to help her in every way possible. Dadi is pleased to see the love between them. She believes that Vansh and Riddhima’s love will overcome any problem in their Kundali.

Ishani reveals that she had been trying to harm Riddhima and foil her happiness. She is the one taking revenge on Riddhima without letting Vansh know. Vansh has a sharp sight, but misses to see his sister plotting against his wife. Ishani makes another evil plan against Riddhima to ruin her fast. She thinks this time Riddhima won’t get saved from her plans. Vansh learns that Ragini is critical. He asks Angre to get Ragini treated. He sends Angre for Ragini’s care. He gets worried thinking Riddhima has heard the secret about Ragini.

Riddhima doesn’t hear anything. The couple gifts watches to each other on their first Karwachauth. She gets happy to see his love. Vansh also keeps a fast for her long life. He wants her to be with him always. He tells her that he doesn’t want to live without her. She realizes that he loves her madly. She wants to be true to him. She feels guilty to lie to him about Kabir. He also wants to tell her about Ragini’s survival. They both have guilt in hearts. They have a romantic moment before breaking the Karwachauth fast.

The family awaits them for the moon sighting ritual. The couple romances somewhere away from the family. The romance looks untimely. It gets revealed that its just Riddhima’s dream. It shows her eagerness to romance Vansh. The family women observe the Karwachauth rituals. Riddhima breaks her fast by seeing Vansh’s face. Dadi blesses Vansh and Riddhima’s pairing.

Ishani plays a master game and reveals to Vansh that Riddhima is just a spy. Vansh gets angered on Riddhima when Ishani shows him a video proof against Riddhima. Vansh gets revengeful and doesn’t want to spare Riddhima. He gets mad at her. He wants to settle scores with her. He hates cheaters and liars. He can’t forgive Riddhima. Riddhima decides to confess the truth to her, but Vansh has got blood in his eyes. Vansh shoots Ragini and Riddhima together. Is this Riddhima’s dream? Keep reading.

Reviewed Rating for this particular episode Ishq Mein Marjawan 2 30th October 2020 Written Update New shocker for Riddhima:5/5
This rating is solely based on the opinion of the writer. You may post your own take on the show in the comment section below.

Pinjara Khubsurti Ka:
Piyush decides to help Mayura. Omkar goes to make Mayura sleep. He finds her sleeping already. He goes to check the cage. Piyush makes a plan to send her away. He gets the keys from Omkar and opens the cage for her. He asks Mayura to leave before Omkar comes. He takes the big risk for her sake. Mayura makes an escape. Omkar realizes that Mayura has tricked him and ran out. He wants to find out who has cheated him and helped Mayura to escape. Will he find Piyush’s truth and punish him? Keep reading.