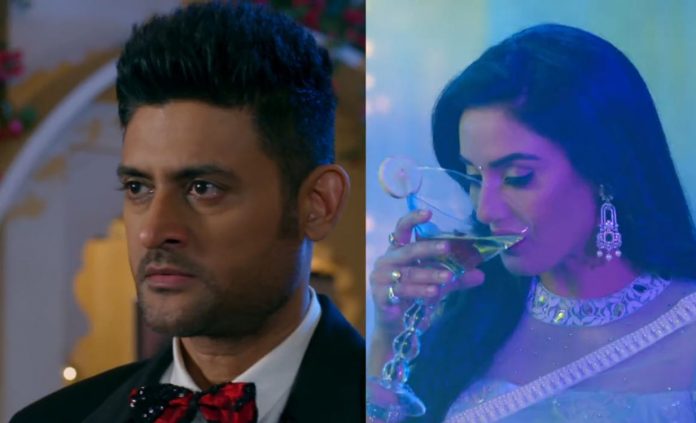 Shaadi Mubarak 30th October 2020 Written Update KT Preeti face a crisis KT shows some dance moves to Preeti and gets his pant torn. He shares the crisis with him. KT tells her that he will ask his family to send pants for him. Preeti asks him if he will stand at the same place till the pants come. She offers a solution to him. She asks KT to come along with her, since she has many emergency solutions. She covers up his torn pant. She helps him and uses her saree to save his respect. He likes her way to using her smartness to take him aside.

Preeti and KT go aside to get the pant fixed. Chanda and Rati bribe the bartender and spike Preeti’s drink. Chanda tells that Preeti will insult herself and KT as well. She wants Preeti to get drunk and create a scene. Meanwhile, Priyanka lies to Kusum when Tarun comes. Tarun doesn’t leave. Juhi worries. She feels they should have told truth to Kusum before.

Tarun meets Kusum. She asks him if he has come to torture his mother. She tells that Preeti isn’t home. He returns the money to Preeti which he had borrowed. He congratulates Priyanka for her engagement. Kusum wants him to leave. He tells Kusum that Preeti and his son is the most important one for Preeti. He shows Kusum that he means a lot to Preeti. Preeti stitches KT’s pant. He stays aside wearing his shorts. Preeti asks KT why did he wear such tight pants. She asks how could he breath in such pants. He tells that fashion is important.

She feels comfort is more important, since fashion has put him in the crisis. She stitches the pant and helps him. He thanks her for saving his respect. He realizes that women can do anything. He wants her to watch some of his movies. Preeti and KT return to the party. The waiter takes the drinks for them. KT and Preeti have a sweet moment of promise. Chanda feels Preeti is trapping KT. Aryan introduces his dad to KT and Preeti.

He tells that KT and Preeti have done good work. Even Aryan’s dad likes Shaadi Mubarak’s work. Aryan tells that his dad is conservative but modern as well. Aryan’s dad makes a leave. KT wants Preeti to have the juice. He raises the glass for the company success. Rati tells that KT is smart, he will understand Preeti is drunk and save her. Chanda tells her that she had spiked KT’s drink as well, so that he doesn’t help Preeti.

Sheena informs KT about Aryan’s car tyre puncture. Preeti doesn’t think they should inform Aryan. KT rushes to help Aryan. He asks Shyam to get Aryan’s car tyres fixed. KT realizes that someone had intentionally done this to send him away from the party. Preeti doesn’t take the drinks. She goes to check Tia’s performance. Tia performs on an item song. KT doesn’t get any mechanic at night. He fixes the car tyres himself. He goes back to Preeti.

He learns about Rati’s plans. He overhears Rati and her mum’s conversation. He realizes that Chanda has spiked Preeti’s mocktail just to get her insulted. Rati wants to go and see the fun. She wants to put the video on social media to make it viral. She knows Preeti will lose the contract and also KT’s partnership. He reveals that Preeti will lose to Tarun and then return home to become their maid. KT learns the entire truth from Rati.

He feels sorry that Preeti has been suffering a lot in her life. She doesn’t think KT will know her plans ever. KT learns Rati’s truth and is super shocked. KT goes to save Preeti from Chanda’s evil plan. Preeti drinks the alcohol and gets drunk. KT reaches Preeti to help her out.

Reviewed Rating for this particular episode Shaadi Mubarak 30th October 2020 Written Update KT Preeti face a crisis:5/5
This rating is solely based on the opinion of the writer. You may post your own take on the show in the comment section below.