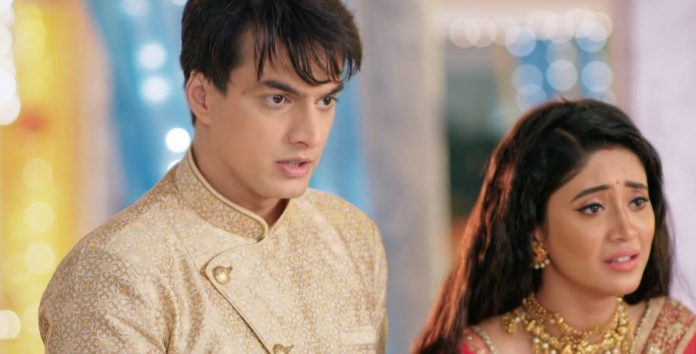 Yeh Rishta Kya Kehlata Hai 2nd November 2020 Written Update Alarming twists Kartik is so proud of his family that they all have much love and affection between them. He doesn’t know that Kairav’s heart has turned evil, who has risked the little baby Akshara to put the blame on Krishna. Krishna also applauds Kairav for his acting. She feels he really acted well and deserved to win the best actor award.

This brings a sense of thinking in Kairav’s mind. Kairav thinks that Krishna isn’t much bad. He thinks to cancel his plan of hurting Krishna by the wrong blames. Vansh and Krish get to know Kairav’s change of plan. They support him. They look for the baby to take her back to the family. They find the baby missing. They try to search for the baby and fail. They get worried on not finding the baby in any of the boxes left there.

They first think that Krishna took the baby with her. They don’t find the baby with Krishna either. Kairav eventually realizes that the baby has been taken by the workers, who came home to take the old stuff. He rushes to check on the baby. He finds the truck already leaving. Being left with no option, he follows the truck. He runs on the road madly to stop the truck and get his sister out. Kairav gets lucky to board the truck when the driver hears his call and stops the truck.

Even then, his struggle doesn’t end. He gets hurt in his work to find his sister. Kairav falls in trouble. He later finds his sister in the box. He gets much tensed when the baby stops crying and doesn’t open eyes. He thinks she fainted due to lack of oxygen. He wants to help her out. He requests her to wake up for his sake. The baby still doesn’t reach, which rings an alarming sign for Kairav.

On the other side, Kartik and Naira learn from Surekha that Akshara is not with her. They learn that the baby is missing. Dadi and Manish get a chance to blame Krishna once again. Kartik and Naira too don’t want Krishna to take the matter easily, since its about baby’s life. While everyone searches for the baby in the house, they realize that even Kairav is missing. Krishna mentions Vansh’s name who made her leave the baby in the cot. Vansh gets questioned. He cleverly lies to the family.

Seeing tensed faces of Krish and Vansh, Kartik realizes that they are lying. He lets them go and follows to know the truth. The family realizes that even Kairav is missing. They learn that Kairav has gone after the truck to find Akshara. Krish and Vansh get helpless to reveal Kairav’s plan against Krishna. Kartik and Naira feel sorry that they couldn’t give security to Kairav. They try all their ways to find Kairav and Akshara. Kartik contacts the driver and the agency to find out his children. Naira accompanies him. They reach through the driver, who shows the entire truck to them. Kartik and Naira fail to find their children. They get determined to find Kairav and Akshara at any cost.

Reviewed Rating for this particular episode Yeh Rishta Kya Kehlata Hai 2nd November 2020 Written Update Alarming twists:3/5
This rating is solely based on the opinion of the writer. You may post your own take on the show in the comment section below.