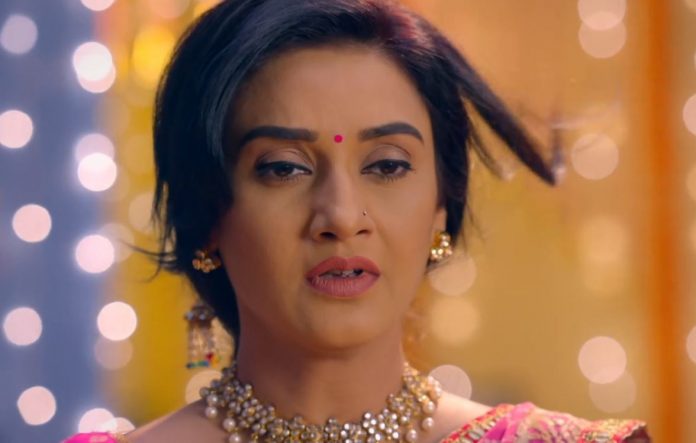 Shaadi Mubarak 3rd November 2020 Written Update Preeti’s last day Preeti apologizes to Kusum. She is ashamed of her son, for whom she has done everything. She asks him why did he involve Priyanka to ruin her life. She doesn’t want to call Tarun her son. She tells him that she has always accepted his mistakes, but this time she will not spare him. She has an emotional outburst.

She tells that she knows the laws to get her rights. She threatens him to drag him to court. She wants to prove that she is capable of doing something. She wanted to make him proud. She feels that he doesn’t deserve to be called her son. She doesn’t want to forgive him for ruining Priyanka’s life. She wants him to stop making such mistakes. She slaps Tarun and gets him to senses.

She asks him to see Kusum’s sorrow and apologize to her. Tarun apologizes to Kusum and Priyanka. Preeti apologizes to Amit and his parents. She feels her son lacks values, he has targeted Priyanka just to take revenge on her. She praises Kusum, who is her best friend and mentor also. She asks Amit not to break the alliance. She asks them to realize that Kusum gave good values to her daughter. She accepts that her son is wrong. Amit agrees to accept Priyanka. The family gets a relief.

Preeti doesn’t want Tarun and Rati to stay back. She wants them to get out. Preeti consoles Priyanka. She gives strength to Kusum after fixing everything. She asks Kusum to conduct the rituals happily. Priyanka apologizes to Kusum. Kusum wants her to be happy. Rati didn’t expect Preeti to slap Tarun. She brainwashes him against his mother. She tells that Preeti has slapped his self respect. She asks him not to leave his son’s rights. She provokes him further. She tells that she is afraid that Preeti will win the challenge.

He can’t imagine running the company without Preeti. He gets sorrowful that he will be losing Preeti. Preeti wishes that she succeeds. She wants to keep courage. KT prays for her. Preeti hides her tension about Tarun’s challenge. Kusum wishes Preeti’s faith succeeds. She doesn’t want Preeti to leave her house. Preeti gets a wedding contract. Preeti tells that KT can’t accompany her to the village, where the people won’t understand her partnership with KT.

Reviewed Rating for this particular episode Shaadi Mubarak 3rd November 2020 Written Update Preeti’s last day:4/5
This rating is solely based on the opinion of the writer. You may post your own take on the show in the comment section below.