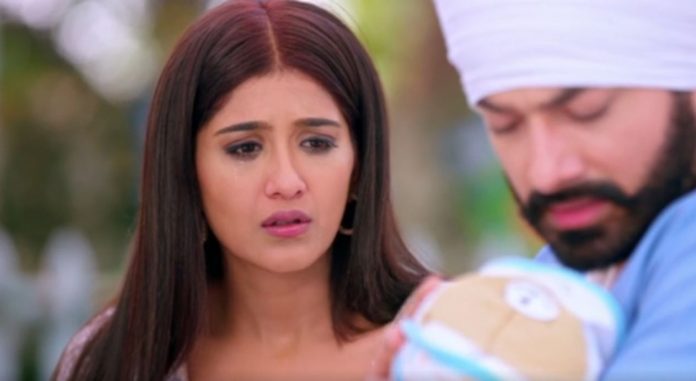 Choti Sardarni 8th November 2020 Written Update Manav’s declaration Manav runs to the hotel manager to get the door card. He gets the card and runs back to his room. Karan is close to have a fall. Manav reaches him and saves him from the fall. He apologizes to Karan. Sarabjeet gets Param’s message and finds him upset. He calls up Param to know about his sorrow. Param learns that Sarabjeet is hurt. He doesn’t want to tell Sarabjeet about Karan. He tells Sarabjeet that he misses him a lot. Sarabjeet tells that he also misses him, he will come home soon.

Manav runs to the hotel manager to get the door card. He gets the card and runs back to his room. Karan is close to have a fall. Manav reaches him and saves him from the fall. He apologizes to Karan. Sarabjeet gets Param’s message and finds him upset. He calls up Param to know about his sorrow. Param learns that Sarabjeet is hurt. He doesn’t want to tell Sarabjeet about Karan. He tells Sarabjeet that he misses him a lot.

Sarabjeet tells that he also misses him, he will come home soon. Meher insists Seema to call Vikram again. Seema asks her not to worry, Vikram maybe busy in his work. Manav answers the call and enquires about Seema’s health. Meher asks Manav about his location. She hears Karan’s cry on the call. She questions him. Manav learns that he is away. He makes an excuse that he is heading for a meeting. Aditi has seen him at the hotel.

She feels she has just imagined Vikram. Meher tries to track Manav. She informs Sarabjeet that Manav has kidnapped Karan. She tells that Manav has taken Karan without informing her. He can’t believe that Vikram has taken Karan. Meher tells him that she has heard Karan’s cry on the call. He tells her that he will find out the hotel around the Golden temple in which Vikram is staying with Karan. He doesn’t want to stay in the hospital.

He tells the doctor that someone has kidnapped his son, he has to leave right now. He asks Tarkesh to find about Vikram Diwan. Doctor tells Sarabjeet that his condition isn’t fine, he wants an assurance note. Sarabjeet writes the consent letter for the doctor’s sake. He tells the doctor that his child’s life is more important than his life. Manav tells Karan that Meher is suspecting him, they should leave before she comes.

Karan cries for Meher. Sarabjeet falls in the hospital corridor. He gets attended by the doctor. Meher reaches the hotel when Sarabjeet informs her about Vikram’s location. He tells the room number to assist her further. He tells that Tarkesh is also reaching there soon. Manav wants to take Karan with him, away from Meher. Meher runs to save her baby. Aditi finds Meher madly running in the hotel lobby. She follows Meher to know the matter.

Manav finally consoles Karan. Aditi tries to know the happening. Meher meets Manav. She finds Karan with him. Aditi doesn’t get to see Vikram. She rings the bell again to know who is inside the room. Meher hugs Karan and cries. Manav tells her that he was taking good care of Karan. Tarkesh tells Sarabjeet that he is reaching the hotel with the security. Sarabjeet asks him not to let anyone know the matter. He doesn’t want to spare Vikram for this huge mistake. Aditi calls Sarabjeet when Manav doesn’t open the door.

She tells him that she has seen Meher entering a hotel room, and strangely she isn’t opening the door. Sarabjeet worries that Vikram’s truth may get known to Aditi. He doesn’t want Aditi get harm herself on knowing Vikram’s cheat. He panics knowing she is also there. He lies to Aditi that he had sent Meher for the important meeting. He summons her to come to the hospital since he is finding hard to breath. Manav doesn’t see Aditi in the corridor, since she leaves. Meher informs Sarabjeet that she got Karan with him. She gets angry on Manav. Sarabjeet asks her to take Karan home, Tarkesh is reaching her to keep Vikram away. Meher and Manav get into an argument.

She tells that Karan will not drink such hot milk. She doesn’t want Manav to touch her baby. She prepares the formula milk for Karan the right way. She feeds Karan. Manav tells that he will learn everything with time. Meher wants to take Karan home. Manav gets rigid that Karan will be with him. She asks him how did he get Karan from her house. He doesn’t answer her. She wants to know who helped him in his plan.

She knows that he had got Karan through Kulwant. She feels that he has changed and joined hands with Kulwant, who tried to kill him by stabbing his back. He doesn’t bring Kulwant’s name in between. He had promised Kulwant that he will not bring her name in between. He tells that he has total right on Karan, he is Karan’s father and wants his rights. He warns Meher to stop testing his patience. He tells her that if he can’t handle Karan with care like she does, then he will hand over Karan back to her. He asks Meher to give him a chance, since he is Karan’s father. He wants to prove that he can take care of his son. He wants Meher to not snatch his rights. He declares that he will keep Karan with him if he passes the challenge to raise Karan well. Meher is in a dilemma.

He tells that they have equal right on Karan. She tells that its tough to fulfill responsibility. She has the first right on her son. He tells her that if she handle Karan the best way, then she can keep Karan with her. He tells that he is ready to return Karan to her if he fails in his challenge. She tells him that she will consult Sarabjeet before deciding anything. Meher takes Karan to Sarabjeet. She tells him about Manav’s challenge. She asks Sarabjeet about his decision to inform Manav. What will Sarabjeet and Meher decide now, keeping in mind that Aditi’s future is at stake? Keep reading.

Reviewed Rating for this particular episode Choti Sardarni 8th November 2020 Written Update Manav’s declaration: 3/5
This rating is solely based on the opinion of the writer. You may post your own take on the show in the comment section below.