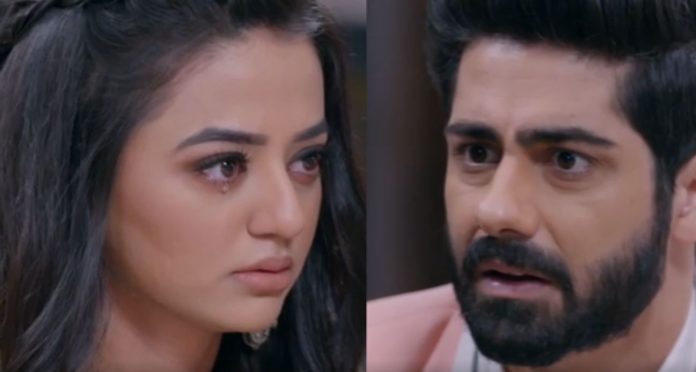 Ishq Mein Marjawan 9th November 2020 Written Update Riddhima’s truth reveals Kabir has lied to Riddhima that someone kidnapped Ragini from his place. Riddhima wants to know who are those kidnappers. Kabir and Anupriya have kept Ragini captive. Riddhima comes to meet Kabir and shares the new developments on Siya’s matter. She tells him that Siya isn’t cheating Vansh, she was just assisting him, Siya doesn’t have Ragini with her, which means the kidnapper is someone else. She suspects Aryan.

She knows that Ishani and Angre can never cheat Vansh, but Aryan can do this crime. She has no idea that Kabir is the kidnapper. Ragini tries to run away again. She throws a vase to get Riddhima’s attention. Kabir tries to cover up, but Riddhima sees the fallen vase. She tells Kabir that someone is really behind there. Anupriya catches hold of Ragini and takes her away, before Riddhima could see them. Kabir is relieved that Riddhima didn’t see Ragini. He wants to kill Ragini before Vansh finds her.

On the other hand, Riddhima sorrowfully returns home. Vansh wants Angre to do anything to get the cctv footage recovered. Angre manages to keep his word. Angre informs Vansh that he has got the cctv footage. Vansh is glad that Angre has shown him the way in darkness. He asks Angre to reach him as soon as possible. He tells Angre that he will not spare Ragini’s kidnappers. Vansh tugs on Riddhima’s nuptial chain by mistake, which breaks it down.

Riddhima is much upset to see the bad omen, which may ruin her marriage. Vansh asks her not to worry for the nuptial chain. He shares the good news happily that he finally got the cctv footage by which he can know Ragini’s kidnappers. He tells her that Angre is bringing the footage to him. Riddhima is in shock knowing that the bad omen is showing effect. She doesn’t want to get spotted in the cctv footage. She thinks Vansh will never trust her again if he finds her taking Ragini in the footage. Riddhima cries in fear that she will lose Vansh and their lovely relation. Vansh wants to see the cctv footage. He tells that he will be finding Ragini’s kidnappers and then Ragini.

Riddhima tells Kabir that Ragini is kidnapped by someone known to them, who keeps an eye on her always. Kabir tells her that she is safe at his place. He feels Siya has lied to her to confuse her. He asks Riddhima to doubt Siya, who might be playing a game with her. Riddhima tells that she trusts Siya, she was saying the truth, she loves Vansh a lot. She tells that Siya had done everything on Vansh’s command.

Ragini tries to alert Riddhima, while Anupriya catches her. Riddhima gets the hint from Ragini. She asks Kabir about the vase falling down. Kabir tells that rats are troubling a lot these days. She wants to check behind the cupboard. Anupriya gets away with Ragini. Kabir is much relieved. Riddhima has a day’s time to find out the truth. Kabir tells her that he will help her out in the matter.

Siya informs Vansh about Riddhima. She tells that she is following new exercises. Siya is glad to get a gift from him. He tells that its a good surprise for him to see her on his foot. Vansh makes her feel special. He pampers her. He tells her that she used to be fascinated with heels sandals. He finds her behaving odd. He asks her to tell him if anything is stressing her. Vansh tells her that he will be finding the real culprits soon. Siya wants to tell him that Riddhima is going to find Ragini.

She has given time to Riddhima. Ragini is caught by Anupriya. She learns about Kabir and Anupriya. Kabir threatens Ragini. Ragini tells them that she will not spare them and tell their truth to Vansh. Riddhima becomes the reason for the family’s happiness. Dadi praises Riddhima for handling all the relations so well. Riddhima doesn’t want their trust to break. Dadi tells her that Vansh isn’t happy.

She asks Riddhima to return the smile to Vansh. She gives the responsibility to Riddhima. She asks Riddhima to not let her nuptial chain fall or break. Riddhima is afraid that her truth may hurt Vansh and Dadi. Anupriya can see Riddhima’s exposure and doom. She tells Kabir that she got the memory card from Chanchal and Aryan. She tells that now there is no proof against her. Riddhima reaches Vansh, who shares the good news that he is going to get cctv footage. Riddhima’s nuptial chain breaks. She cries on the bad omen. Vansh finds her getting too emotionally affected by the bad omen. He pacifies her.

He tells her that he will get a new one for her. He tells that he is really happy to soon find the kidnapper. Riddhima is worried that her truth may come out. She tells that she will lose him, their marriage is under threat now, since the nuptial chain broke. Vansh asks her not to worry. He tells that her tears are precious for him. He can’t see her in trouble. She fears that his faith on her is going to break. Vansh strings the black beads for Riddhima to pacify her. He tells her that he has fixed the nuptial chain, their marriage and love relation don’t depend on the black beads.

He asks her to rest assured that everything will get fine. She makes prayers for her family. Kabir instructs Mishra to take care of Ragini. Ragini begs Mishra to give her some food. Riddhima and Vansh make prayers for their goals. Vansh wants to find Ragini and fix things. Riddhima wants the same thing but to fix things in her marriage. Ragini steals Mishra’s phone to call Vansh. She wants to inform him that Anupriya kidnapped her. Vansh asks Riddhima not to stay upset. Riddhima wishes to confess that she is the reason for his sorrow. She fears to save her marriage.

Reviewed Rating for this particular episode Ishq Mein Marjawan 9th November 2020 Written Update Riddhima’s truth reveals: 5/5
This rating is solely based on the opinion of the writer. You may post your own take on the show in the comment section below.