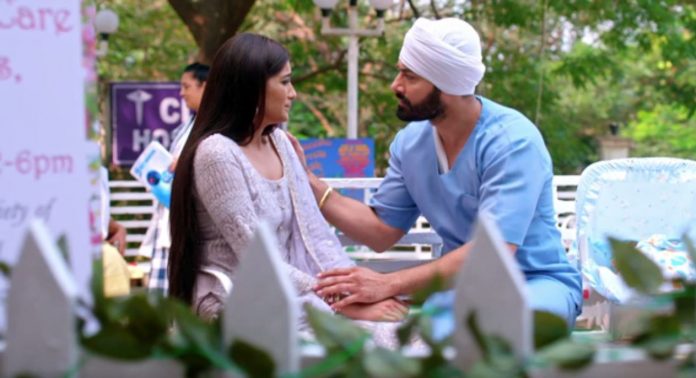 Choti Sardarni 9th November 2020 Written Update New enemy enters Manav accuses Meher for cheating him. She tells him that its all fate. He tells her that he has told her the entire truth, but she didn’t accept him, she didn’t tell him about Karan. He calls her a big liar, who changed because of Sarabjeet. He tells her that he begged her to come along and have a life with him, even then she didn’t tell him about their child.

He accuses that she has deceived him by keeping him away from his child. She tells that she loves her son as much as he loves. She tells that she didn’t hide anything, she was helpless, since he is married to Aditi. She knew that her truth will ruin Aditi and his marriage. She didn’t wish his life to spoil. She wanted him to move on with Aditi. He tells her that his happiness is already ruined. He wants her to stay happy, since she is just thinking of herself. He wants her to give Karan to him.

She tells him that Sarabjeet is unwell, she will speak to Sarabjeet at the right time and decide about Karan. She tells that Sarabjeet will come home till Diwali. She wants Manav to wait until she takes a decision. She warns him to stay away till them. He tells that she can know her decision, but its his decision that he will have Karan on the day of Diwali. Meher informs Sarabjeet that she has reached home with Karan. She finds Param asleep. She wakes up Param and gives Karan to him. Param gets glad to see Karan back.

Param asks Karan to never leave him again. Meher tells him that Kulwant took Karan with her to make him play with Yuvi. She promises that Karan will always be with him now. Meanwhile, Kulwant tells her sons that she will use Manav in her favor. She tells them that Karan is a big problem, until Vikram takes her along, the problem will stay in Meher’s life. Sarabjeet gets to meet his sons Param and Karan. He gets too happy.

Manav speaks to Karan’s photo. He has many plans with Karan. He asks Aditi if Sarabjeet will come home till Diwali. Aditi tells that Sarabjeet’s recovery is happening fast. She tells him that Sarabjeet’s reports will be coming, then they will know about his discharge. Seema asks Vikram why did he order a cot. Manav tells her that someone will be coming home to call her Dadi. He has to wait for just two weeks for Diwali. Aditi feels shy.

Seema asks Aditi to give them good news soon. Param makes plans for the Diwali celebrations. Sarabjeet tells him that he will be coming home before Diwali. Meher tells him about Vikram’s demand. She tells that they have to tell their decision to Vikram. Sarabjeet tells that he will handle Vikram. He doesn’t want to send Karan away from him. Manav plans to welcome Karan home. Aditi gets glad that Vikram is planning the baby. He gets irritated by Aditi’s touch. Aditi gets a call from the hospital and leaves for her work.

Manav is relieved that he got away from her. Meher doesn’t want Manav to take away Karan. She wants Karan with her. She protects her son. There is a new mystery in the show. Someone is seen hiring an assassin to kill Sarabjeet, Meher and their son Param. Sarabjeet’s rival makes an entry to settle scores with him. Meher gets attacked at home while Sarabjeet is at the hospital. Meher sees a servant dead. She gets worried on not finding her sons around. How will Meher rescue her sons from the upcoming trouble? Keep reading.

Reviewed Rating for this particular episode Choti Sardarni 9th November 2020 Written Update New enemy enters: 5/5
This rating is solely based on the opinion of the writer. You may post your own take on the show in the comment section below.