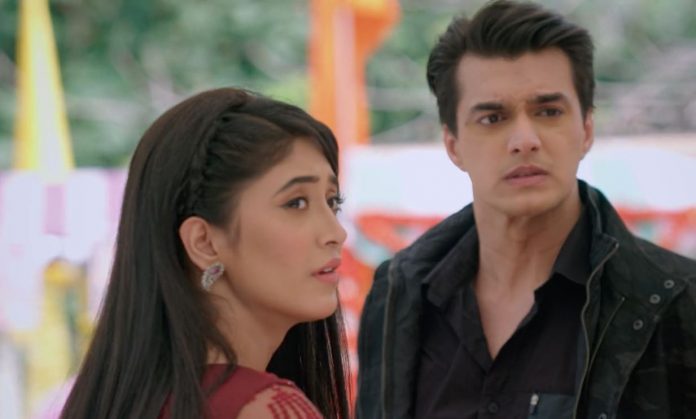 Yeh Rishta Kya Kehlata Hai 9th November 2020 Written Update Naira scared for Kairav Kartik, Manish and Naksh get terrified to see the police coming at the spot to enquire about Aditya’s accident. They don’t want anything to happen to their children. They rush from there to answer the police. Naira finds her son in a similar situation like her. She doesn’t want Kairav to leave the house in fear that his parents won’t support her. She tells him that he has said true and showed courage, they will stand by him. She tells that he has chosen the right path.

Vansh tells her that he was scared and asked Kairav to run away. Naira understands their emotions and fears. She tells that they are family, who will always protect them. Vansh tells that Kairav told the same to him and stopped them from running. Naira asks Kairav not to worry. She calls Kartik to know about Aditya. She wants to fight with the world for the sake of her son. She knows her son isn’t at fault. She doesn’t want her son’s fate to be like her. She gets petrified knowing the police has arrived the accident scene to investigate the matter.

Naira wants his assurance that none will take away Kairav from them. She asks Kartik why did the police come. She doesn’t get his voice clear. She wants to know if Aditya is really dead. Aditya is alive. He wants to tell the police about Kairav pushing him. Kairav gets scared that police will arrest him. Kirti and Naira console the kids. Naira calls back Kartik to know the matter. Kartik tells Naksh that Aditya is alive.

Manish tells them that they should not get involved in the mess. He doesn’t want to get spotted with Aditya. He tells that they will not get interrogated by the police and even protect their kids. He asks Kartik and Naksh to keep themselves out of this matter, like they had no idea. Naksh asks if he means they should lie to the police. Naira tells Kirti that they should go to the temple and find out. Kairav is worried that police may come any time. Kairav tells Vansh that he has pushed Aditya, just he will be arrested.

The kids make prayers to get saved. Suwarna gets emotional hearing their prayers. The police’s presence makes Manish tensed. He tries to save the family. Kartik tells Manish that they should talk to the police and clear the kids’ name. Manish tells them that if the police hasn’t seen Aditya and came for some other problem, then they should keep silent. Kartik and Naksh want to confess the mistake made by Kairav and deal with the matter maturely. Inspector finds them tensed and questions them. Manish lies to the inspector.

Naira and Kirti reach the temple. They find the police questioning Kartik. Naira prepares to answer the police. She apologizes to the inspector. Kartik stops Naira from saying anything to the police. Naira and Kirti get confused. Kartik asks Naira to park the car somewhere else. Kirti asks Manish if Aditya is dead or alive. Manish tells that they didn’t check Aditya. Naira wants to tell the police and take Aditya to the hospital.

Manish doesn’t think they should help Aditya. He tells that police will not listen to them and arrest the kids if they fail to prove the innocent. Naira tells them that she was also afraid of the law and fell into a big mess. She tells that the police would help them, since kids aren’t at any fault. She believes that they should take the help of police. Manish doesn’t agree with her. He wants to keep the kids away from the law hassles. He orders her to accept his decision. Police finds Aditya there.

The family is worried since Aditya is still troubling Naksh, Kirti and Naira in some way or the other. They are angry that this time Aditya has targeted the kids. Police checks Aditya and assume that he is dead. Kartik and Naira grow nervous. Aditya gets conscious. The problem gets bigger when Aditya sees Naira Goenka around and accuses them to be responsible for his accident. He doesn’t want to spare Goenka family this time. He wants revenge on Kartik and Naira. He remembers the insult. He tells the police that Kartik and Naira’s son had pushed him down. Kairav falls into a mess, even when Kartik and Naira try hard to save him.

Reviewed Rating for this particular episode Yeh Rishta Kya Kehlata Hai 9th November 2020 Written Update Naira scared for Kairav: 5/5
This rating is solely based on the opinion of the writer. You may post your own take on the show in the comment section below.