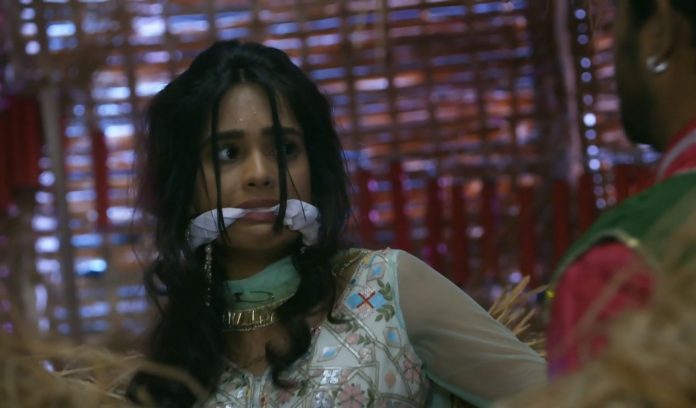 Kumkum Bhagya 13th November 2020 Written Update Sanju kills Prachi Sarita suspects that Prachi is kidnapped. Sanju informs Aaliya that he kidnapped Prachi, but her phone is ringing. He tells that he has come to a storeroom. Aaliya asks him to make sure that no one has seen her. Sarita informs Pragya that Prachi is kidnapped by someone. Pragya can’t believe it. She rushes to find Prachi. Pragya enters the storeroom to find Prachi. She doesn’t find Prachi. Ranbir is hurt by his family’s decision.

Pallavi asks him to come soon for Raavan Dahan. She tells that Vikram has got Dida as well. She knows that Ranbir will do what they want. She tells Rhea that her engagement will happen. Sarita tells that she has heard Prachi’s ring tone. Shahana doesn’t think Prachi is kidnapped. Sanju takes Prachi to another place. Sarita asks Pragya to trust her. Ranbir dresses up as Ram for the Ram leela. The pandit guides him.

Aaliya tells that once Raavan Dahan happens, Ranbir and Rhea will get engaged. She tells that Sanju will take Prachi away. Rhea tells that she deserves Ranbir, but Prachi just deserves Sanju. Sarita tells Shahana that something is wrong. Shahana calls up Ranbir to know about Prachi. He tells that Prachi isn’t with her. Sanju thinks he has easily fooled the people. He wants to take Prachi with him. He wants to marry her. He takes Prachi outside.

Abhi catches him and suspects him on seeing his fake beard. He wants to know what’s in the sack. Sanju attacks him to get rid of him. He doesn’t want Abhi to ruin his plan. Pragya and Raj find Abhi unconscious. They worriedly take Abhi to the room. Abhi gains consciousness. Raj calls for a doctor. Pragya is worried. Raj tells that some thief would have come home and attacked Abhi. He asks Pragya to stay with Abhi. Pragya takes care of Abhi’s wound.

Sarita sees Pragya with Abhi. She misunderstands them. She wants to know their relation. Abhi tells Pragya that Prachi would be in danger. Prachi gains consciousness and finds the kidnapper. She shouts for help. She sees Sanju’s face. She scolds him. He tells her that he loves her and wants to marry her. She refuses to him. She tells him that she just loves Ranbir, they love each other. She clears to Sanju that he isn’t like Ranbir, he isn’t a good person like Ranbir.

Sanju gets angered hearing her praise for Ranbir. He ties her back and apologizes. He tells her that he will not let her become of Ranbir. He plans to get her killed by Ranbir’s hands. He makes an evil plan to tie her behind the Raavan, so that she burns alive along with the Raavan effigy. He tells that Ranbir will shoot the arrow, unaware of her presence behind the effigy. He tells that Ranbir will also die on seeing her dying because of his mistake.

Abhi and Pragya have a moment together. She asks him how did he get hurt. He tells about someone is disguise leaving Aaliya’s room. She tells that Sarita is suspecting Prachi’s kidnapping. Abhi tells that maybe that man was carrying Prachi in the sack. He tells that it clearly means that Prachi is kidnapped. Sarita and Shahana don’t see Prachi anywhere. Sanju tells Prachi that he gave her a place in his heart, but she had insulted him. He wants her to die if she can’t marry him. Abhi rushes to rescue Prachi and succeeds.

Reviewed Rating for this particular episode Kumkum Bhagya 13th November 2020 Written Update Sanju kills Prachi: 3/5
This rating is solely based on the opinion of the writer. You may post your own take on the show in the comment section below.