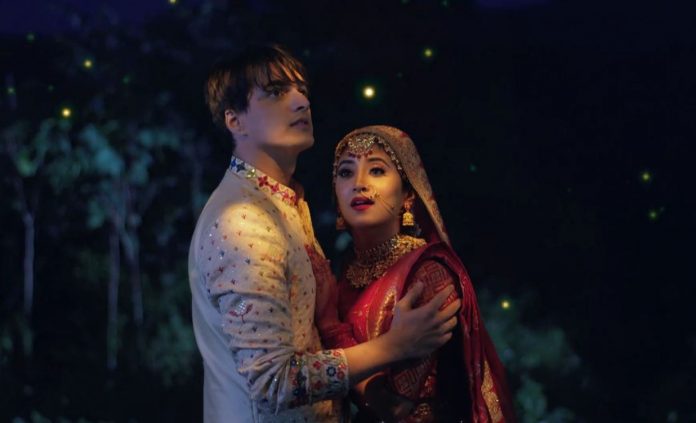 Yeh Rishta Kya Kehlata Hai 13th November 2020 Written Update Kaira’s Karwachauth Kartik begs the fake horses to run and take him home to Naira. Naira is on the way to Kartik. She tries hard to explain the Inspector that she isn’t the runaway bride. Inspector wants to get it confirmed by the groom. He awaits the groom. The groom reaches there while Naira makes a video call to Kartik. Kartik and the groom already know each other. They get into an argument. Naira tells the inspector that she has to go to her husband Kartik and break the Karwachauth fast.

Groom tells the inspector that Naira isn’t his bride. Inspector apologizes to Naira and asks her to go. She gets troubled that the auto driver has run away. She drives the auto herself to reach Kartik. After much difficulty, she finally makes it to Kartik. They have a lovely moment of union.

Kartik and Naira share a romantic hug. He tells her that their Karwachauth has become very unique since they are celebrating it with the lightning bugs this time. The bugs emit light in the darkness and make their Karwachauth more glowing. Kartik and Naira see each other’s face through her dupatta when she loses the net. She realizes that she didn’t get any water along to break the fast. He tells her that he will arrange the water for her. They walk some distance and get to see a pot of water. Kartik falls into trouble when the men assume him to be the naughty person who steals all the water every day and breaks the pot.

They call the police to get Kartik arrested. Naira tries hard to explain that Kartik isn’t a thief. Inspector arrives there and finds Kartik and Naira once again. He knows that they are a couple and belong to a good family, but are getting mistaken as the thieves. He lets them go and take some water for their fast breaking rituals. Kartik and Naira get a moment of peace after they get a glass of water. Kartik suddenly faints down and adds up more troubles for Naira. Naira tries to get him to consciousness by putting water on his face.

Kartik doesn’t gain consciousness, which becomes a matter of concern for her. She struggles to take him to the car. She drives the car home. The family waits for Kartik and Naira. Kairav makes prayers that his parents stay safe and also get some water to break the fast. Dadi is also worried that Kartik and Naira are away form the home. Naira had sent their smiling faces selfie to Dadi, which gives some relief to the latter. When Naira arrives with unconscious Kartik, the family gets too worried. Manish learns that Kartik had been struggling to arrange a horse.

He is irritated by the fact that Kartik is just busy with Naira and their children. He wants Kartik to look after the business and take care of the family as well. Suwarna asks Manish not to confront Kartik on the festive day and spoil the latter’s mood. She tells that Kartik is a responsible man and would be knowing his duties well. Manish is angry on Naira after seeing Kartik’s state.

Reviewed Rating for this particular episode Yeh Rishta Kya Kehlata Hai 13th November 2020 Written Update Kaira’s Karwachauth: 3/5
This rating is solely based on the opinion of the writer. You may post your own take on the show in the comment section below.