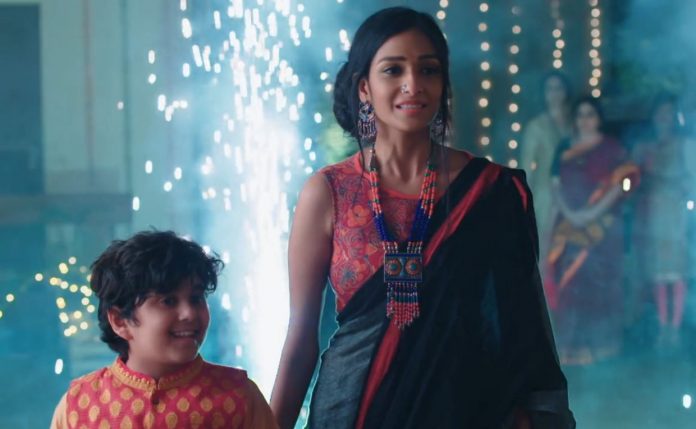 Yeh Hai Chahatein Mahima returns 19th November Written Update Yeh Hai Chahatein written update Prisha will be coming face to face with Mahima, Saransh’s real mother. Yuvraj angers Prisha by telling her that Rudraksh left her alone on her honeymoon. She doesn’t want to listen to him. He wants to know if Mahima is responsible for Rudraksh’s leaving. He wants to tell Prisha about Mahima. He happily goes to tell her, but she leaves by then. He feels his fate is bad. He knows that Mahima will meet Prisha and then snatch Saransh. He wants Saransh and the luck jackpot. He goes back to Delhi with Prisha.

Prisha doesn’t have phone battery to call Rudraksh. Rudraksh wants to tell everything to Prisha before she reaches home. He reaches the airport to pick her. Prisha wants him to stay away. Yuvraj asks her not to have a problem with him all the time. He tells that he booked the same taxi and they can share it. He doesn’t want to leave her alone.

She goes in the same taxi with Yuvraj. He convinces her. He wants her to go home and meet Rudraksh. Rudraksh misses to get her. He sees her with Yuvraj. He grows jealous. He didn’t expect to see Yuvraj. Ahana wants to celebrate Diwali well. He tells that Saransh will be leaving with his real mother, and then Prisha won’t have a reason to stay with Rudraksh. She tells that Rudraksh will be of Mishka now.

Prisha and Yuvraj argue on the way. Yuvraj laughs on her relationship with Rudraksh. He asks Prisha to call Rudraksh and ask him the reason for leaving her alone. He tells Prisha that Rudraksh didn’t come to do a husband’s duty. He swears that he would have never done this with her if she married him. She doesn’t want to trust him. She tells that he doesn’t care for her, he is just provoking her against her husband. She wants him to shut up. She wants to reach Rudraksh and know if he is fine. Rudraksh doesn’t get Prisha.

He worries that she will reach home before him. Ahana tells Saransh that she has a surprise for him. She asks him to play with crackers. Vasudha doesn’t want to leave Saransh alone. Ahana asks her not to upset Saransh. Rudraksh reaches Prisha. He starts bashing Yuvraj in anger. Prisha stops Rudraksh. She tells him that Yuvraj was helping her. Yuvraj is happy to get beaten up. He knows that Rudraksh and Prisha will get a shock soon. He asks Rudraksh to do his duties towards his wife next time. He wants to find out where did Mahima go. Rudraksh and Prisha have a hug. She wants to ask him where did he go, why did he leave her alone at the hotel room and checked out. She wants to know what’s the life changing event.

Rudraksh tells her that he wanted to reveal everything to her before she comes home. She gets suspicious and tensed. Saransh hinders their talks. He doesn’t let her know about Mahima. He presents her the big surprise, her elder sister Mahima. Rudraksh tries to stop Saransh, but Prisha gets to see Mahima. She is much shocked to see Mahima alive. Prisha can’t believe her eyes. Mahima is happy to get her son alive. Yuvraj watches Mahima’s entry in Khurana household. He rejoices seeing the real drama. Ahana and Mishka are also happy. They want to see what happens next. Vasudha calls Gopal to make him meet Mahima.

Reviewed Rating for this particular episode Yeh Hai Chahatein Mahima returns 19th November Written Update: 3/5This rating is solely based on the opinion of the writer. You may post your own take on the show in the comment section below.