Anupama 20th November 2020 Written Update Rakhi prepares a shocker Vanraj informs Anupama that he has reached the place for the meeting. She asks him to keep Baa informed, since Baa worries when he doesn’t answer calls. She confronts him that he is lying again. He gets angry that she is getting smart. He is at the resort with Kavya. Rakhi watches them. She speaks to the resort’s owner, who is her friend. She tells that she knows Vanraj is cheating his wife, he is here with his office employee. She asks the lady to help her in teaching a lesson to him.

The lady agrees to assist her in the plans. Kavya and Vanraj spend romantic moments. He is shocked to see Rakhi around. He asks Kavya to see Rakhi. He asks her if Rakhi is following them. Kavya tells that he just scared her with his joke. They have a laugh. They don’t know that Rakhi is really there and keeping an eye on them. Rakhi wants to expose Vanraj’s true colours. She wants to make his trip memorable. Samar feels that Vanraj has gone with Kavya.

Anupama tells that she is aware of this, she is much hurt, but she has to hide the truth from elders. She goes to Nandini’s house to take dance classes. Nandini appreciates her dance. She hugs Anupama. She likes Anupama a lot. She asks Anupama to adopt her and make her daughter to keep her home. Samar doesn’t want Nandini to become Anupama’s daughter. Anupama tells that Nandini is already like her daughter. Kinjal comes to them. She alerts Anupama to come fast and see Rakhi’s sent pictures. She tells that Rakhi has sent pictures to Baa.

Anupama is tensed. Baa shows Rakhi’s pictures to them. She says Rakhi is inviting us at the resort. Rakhi calls Anupama. She asks Anupama to come with the family. She promises to make the trip memorable. Baa and Bapu ji agree. Anupama gives her nod to Rakhi. Nandini doesn’t want to accompany in the family trip. Kinjal insists Nandini to come. Samar asks Nandini to clear her bills herself if she wants to keep self esteem Nandini tells that she can’t afford to stay in five star hotel.

Bapu ji tells that she can pay as much she wants and he will pay the rest. He convinces her. Anupama misses to inform Vanraj about their trip. She gets doctor’s permission for Hasmukh’s travel. Rakhi learns that Vanraj is planning a romantic date with Kavya. She wants to expose their romance to the family. Vanraj and Kavya are lost in each other. Rakhi clicks their pictures. Rakhi wants to book a room for Anupama. Vanraj misses to hear it. Anupama messages Vanraj about their trip. Vanraj doesn’t check messages. The family is excited for the trip. Samar finds Nandini simple and loves her simplicity.

He wants to confess his love for her. Hasmukh asks Anupama to get a makeover. Anupama doesn’t want her family’s happiness to shatter. Vanraj checks her message. He calls Anupama to know where is the family holidaying. He wants to know about the resort. Rakhi collides with him and makes him drop the phone. He fails to hear the name of the resort. Rakhi prepares a big shock for Vanraj and his family.

Reviewed Rating for this particular episode Anupama 20th November 2020 Written Update Rakhi prepares a shocker: 5/5 This rating is solely based on the opinion of the writer. You may post your own take on the show in the comment section below. 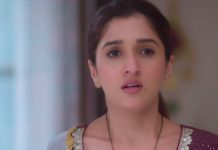 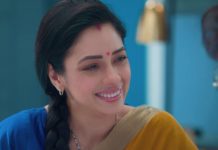 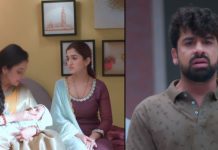