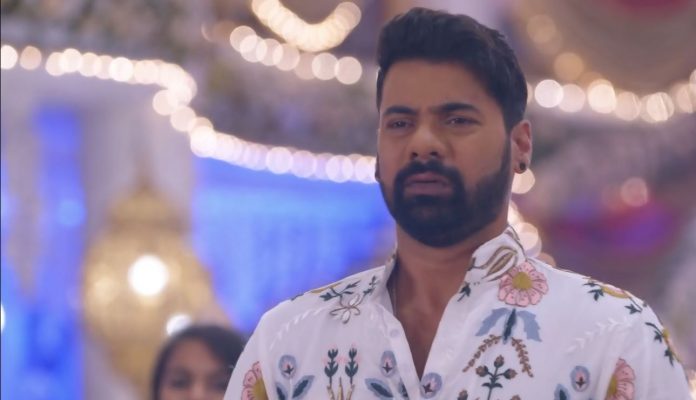 Kumkum Bhagya 21st November 2020 Written Update Rhea upsets Abhi Dadi wants Abhi and Pragya to be together, since they have united with Rhea now. She tells that their happy family shouldn’t catch any bad sight. Pragya gives the credit of their union to Dadi. She tells that nothing will happen to them until they have the elders’ blessings. Luckily, she feels she has many elders to bless her and wish the best for her. She is much glad. Rhea is much happy to see Pragya and Abhi together. Abhi takes care of Pragya.

Rhea finds him a complete gentleman. Rhea demands more love from Pragya. Abhi and Pragya now have a duty to tell the truth to Prachi and win her vote for their union. Abhi misses Prachi. He sees Rhea and Prachi’s pictures. Rhea is with him, so he talks of Prachi. Rhea gets insecure that he is still talking about Prachi. She asks him can’t he see her ever. She tells that she is also his daughter and he should never remember it. Abhi gets upset seeing her reaction.

He thinks Pragya was right that Prachi and Rhea should accept each other as sisters before their union. On the other hand, Ranbir and Prachi spend some moments of peace at her house. Ranbir and Prachi profess love for each other. He tells her that very soon she will be his wife. He tells that he is awaiting the day when she will become Mrs. Prachi Ranbir Kohli. Prachi gets happy to hear his name with his name.

Abhi reminds Pragya that he used to show her fire crackers glowing the sky. He had promised her that he will make her feel safe on every Diwali. He keeps his promise that he will always hold her in arms and keep her feel safe. Rhea likes to see them close and happy together. She likes their love. Dadi blesses them. Pragya thanks Dadi for making her unite with her daughter. Pragya wants to go home. Abhi wants her to come along. Ranbir and Prachi have a moment. She doesn’t want to keep the costly diamond ring.

He tells her that she can also make him wear an engagement ring. She tells that she doesn’t have anything. He tells that even a paper ring would appear as diamond to him. He tells that their ring will always be unique since it will connect their hearts and make them vow that they will get married. He makes her feel special. He gets a round ring from the medicine bottle and asks Prachi to make him wear it. Prachi loves his simplicity. She makes him wear that ring. They have a sweet romance. He tells that she will soon be his wife.

Pragya wants to make a call and inform Prachi. She wants to unite Prachi and Rhea. Sarita and Shahana get disturbing Prachi’s special time. Ranbir makes a leave and gives good memories to Prachi. Pragya calls Prachi to make her know about Rhea. She asks Prachi to call Rhea and wish her happy Diwali to ed the old differences. Prachi agrees to do as she says. Pragya wants to inform Rhea that Prachi would call her.

Prachi doesn’t want Pragya to be upset on Diwali. She wants to call Rhea and wish her, just as Pragya wants. Rhea misses Pragya and cries for her love. She makes a confession to Abhi that she knew that Prachi’s mom is her mom, since she got some pictures from her house. Abhi gets emotional to see the pictures. She reactes that he always sees Prachi, not her. She is scared that he will love Prachi more than her. He tells her that when Pragya and he got separated for a big issue, he was devastated.

Rhea tells him that Aaliya told her about that painful phase. He tells that he had changed a lot after Rhea’s birth. He loves Pragya a lot and confesses his feelings. He tells that Pragya changed him first and then his daughters changed him. He tells that he will always love her more than Prachi. He wants to see her happy. Pragya likes to see them happy. Abhi gets jealous seeing Rhea and Pragya hugging. Pragya asks Rhea to speak to Prachi if she calls, just for her sake. Rhea agrees to wish Prachi on diwali. Abhi asks Rhea to make a call to Prachi. Prachi tells Ranbir that she wants to wish Rhea on diwali on Pragya’s word.

Ranbir wants to know Pragya and Rhea’s connection. Prachi asks him what does he want to say. He hides the matter. She wants to tell him if there is anything. He asks why does Pragya love Rhea so much. She tells that Pragya loves everyone. He tells that Pragya knows Rhea’s crimes and even then she loves Rhea, she met Rhea at the hospital and was too emotional, she was just crying for Rhea. He tells that Pragya was much concerned for even Abhi. He wants to know Pragya and Abhi’s relationship. Prachi gets confused. She doesn’t want him to judge Pragya, who loves everyone around. She asks him not to behave silly like Shahana. She shocks him by saying that their relation will be threatened if he suspects Pragya.

There is a huge drama in Luthra mansion. Mahira challenges Preeta that she will make her break the Karwachauth fast. Preeta tells her that she believes in Karwa Maa blessings and she will complete the fast. Mahira tells that she isn’t taking the Karwachauth as any game, its important for her as well, since the fast will help her prove to the world that she is Karan’s wife. She troubles Preeta further. The family gets stupid to not suspect Mahira for poisoning Preeta’s Sargi. They know that Mahira hates Preeta.

Even then, they act innocent. Mahira tells Preeta that she will be doing something big to shock her. She asks Preeta not to blame her. Kareena tells the family about the dead cat in the kitchen. She adds that the cat didn’t drink any milk, but consumed the laddoos made by Sarla. She concludes that the laddoos had poison in it, which Preeta ate in her Sargi and fell sick.

She wonders why would a mother add poison for her daughter on Karwachauth. She can’t believe that Sarla and Preeta are trying to frame them. Sherlyn and Mahira instigate Kareena further against Sarla’s motives. They want Kareena to blast her anger on Sarla when the latter comes to meet Preeta. Preeta is upset that her mother is getting blamed. Bani tells that Mahira is saying the truth. Mahira declares that the laddoos had poison in it. Preeta faces new troubles because of Mahira and Sherlyn.

Reviewed Rating for this particular episode Kumkum Bhagya 21st November 2020 Written Update Rhea upsets Abhi: 3/5 This rating is solely based on the opinion of the writer. You may post your own take on the show in the comment section below.