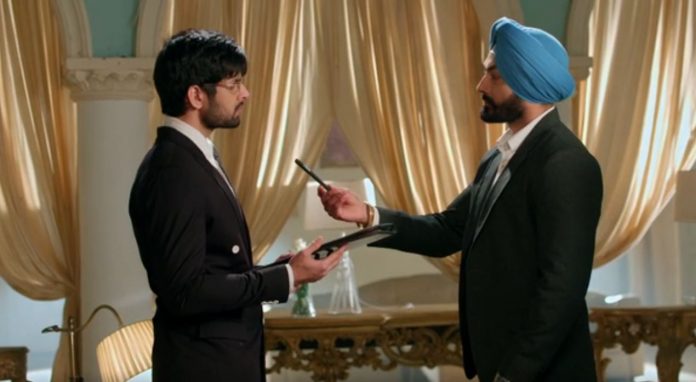 Choti Sardarni 21st November 2020 Written Update Sarabjeet smart plan Sarabjeet wants to know what difference will Vikram bring in Karan’s life. Manav tells that he will give father’s name to Karan, since Karan is his son, his own blood. He wants Karan to be known by his name. Sarabjeet asks Vikram to take Karan’s custody. Harleen wants to know what is Vikram wanting from them. She questions Sarabjeet. Sarabjeet tells Harleen that he will get Aditi’s happiness. He doesn’t want them to worry. Robby wants to find out the secret. Sarabjeet gives the legal papers to Vikram. He asks Vikram to sign on it and take Karan forever.

Manav can’t believe it that Sarabjeet has agreed to give Karan’s custody to them. Meher interrupts Sarabjeet. She wasn’t aware of his decision beforehand. Sarabjeet doesn’t let her speak. He wants Vikram to sign the papers. Manav gets happy to see the custody documents. He is overwhelmed with emotions. He thanks Sarabjeet for understanding him. He fills the details in the papers. Sarabjeet tries to clear out what he actually meant. He asks Manav to write the child’s father’s name. Manav tells that he is writing Vikram Deewan.

Sarabjeet tells him that his name with Karan doesn’t matter, Karan’s father name doesn’t matter, since Karan will always be Manav’s son. He asks Manav to let Karan stay with them. Manav tells that Karan will stay with him. Sarabjeet tells that he will lose in the custody case. He asks Manav not to drag Karan in the court case, keep him away from problems. He tells that name doesn’t mean anything for a child, mother means a lot for a child.

He explains that they will never stop him from meeting Karan, he can have his rights on Karan. He wants to pay respect to Manav in the family. Manav gets Seema’s call. Seema wants to know about Aditi. He tells her that Aditi is okay. Seema tells him that she had a nightmare about her. He asks her not to worry about Aditi. Meher asks Vikram to take Aditi’s responsibility for the sake of Seema. She tells that he has to answer Seema if Aditi doesn’t go home with him.

On the other hand, Kulwant stops the guy to get the gold chain from him. She learns that he is Amrita’s brother. She scolds him for duping his sister. She takes the chain from him. Meher and Sarabjeet sort out Aditi’s problem. Manav turns caring towards Aditi. He tells Aditi about his past. He tells Aditi that there is no girl in his life except Aditi. He apologizes to her. He decides to keep their marriage. He wants to take her home.

Sarabjeet asks them to forget the matter. Aditi also wants to know about the girl. She asks Sarabjeet and Meher to help her find the girl. Later, Kulwant comes home and summons Amrita. She exposes Amrita’s lie to the family. She shows the gold chain. She scolds Amrita for lying to her and giving her chain to her brother. Amrita apologizes to her. She tells that she just wanted to help her brother.

Kulwant reprimands her. She wants to know what else did she give to her family. She vents anger on Amrita. Robby goes to the room to get his phone. He wants to know about the secret Sarabjeet is hiding. Robby makes an excuse seeing Meher. He goes away. Meher looks for custody papers. She finds the papers missing. She doesn’t want anyone to get the papers. Param gets the custody papers. He takes the papers to Harleen. Sarabjeet and Meher get worried. Do you think Sarabjeet had handled the matter in a right way and took the right step? Comment below. Keep reading.

Reviewed Rating for this particular episode Choti Sardarni 21st November 2020 Written Update Sarabjeet smart plan: 4/5 This rating is solely based on the opinion of the writer. You may post your own take on the show in the comment section below.