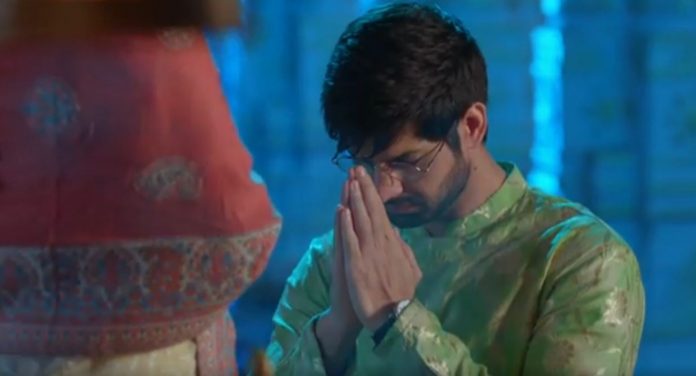 Choti Sardarni 23rd November 2020 Written Update Manav reveals all Meher and Sarabjeet aren’t aware of the upcoming storm in their family which will shatter all the relations. They tried hard to save the relations from suffering the pain. Robby happens to find out the secret that Meher was Vikram’s lover before and had a child Karan with him. He wants to use this breaking news by Pathak’s help. Robby and Pathak have joined hands to ruin Sarabjeet.

Meher’s past gets revealed to Robby. Meher thinks Sarabjeet has successfully handled Vikram’s problem and now Vikram will be living happily with Aditi. She thinks the troubles are over for them. She wishes that Karan becomes just like Sarabjeet, a good-hearted and true person. She tells Sarabjeet and Param that she wants Karan to be Param’s shadow, they always stay together and have same thinking. Sarabjeet assures that Karan will be with them.

Manav happens to tell the truth of his past with Meher to Seema. He takes her to the temple and reveals the entire truth to her to take her info confidence. Manav seeks her blessings so that a father wins in getting his son back.

Moreover, the unexpected twist will be seen. Seema will accept his truth. Seema sympathizes with Manav and blesses him. He takes Seema’s blessings to reunite with Karan. Will Manav succeed in getting Karan? Which father will win in the battle, Manav or Sarabjeet? Did Robby really get to know Meher and Manav’s past? How will Meher and Sarabjeet change Manav’s mind for once and all to stop the coming storm from ruining Aditi’s future? Keep reading for more updates.

He tells that he will handle Karan. Harleen tells them that Karan has spoilt the papers because Meher didn’t use any diaper. Meher tells that Karan is feeling uneasy by the rashes. Sarabjeet hands over the file to Harleen. Meher and Sarabjeet are happy that Karan himself saved the secret from coming out. They wish Vikram understood this. Manav brings Aditi home. Seema is happy that Aditi is back. She finds Aditi’s wrist hurt. Aditi lies that she got hurt during an operation. Manav is worried by Sarabjeet’s warning.

Meanwhile, Robby meets Pathak to hand over the biggest secret of Meher’s life. Pathak is glad that he has got a big secret in his hand to ruin Meher and Sarabjeet’s lives. Meher is stressed because of Manav. Sarabjeet encourages her that they will come out of every crisis by the blessings of their God. He asks her not to have any worry. Meher knows he is right. Seema takes Vikram for a Kulpuja. She tells that he should also fight for every justice like Krishna.

Manav misses Karan. He is worried that he will lose the court case because of his dual identity. He feels troubled because of his new identity of Vikram Deewan. He can’t leave his old identity and rights on his son. He tells Seema that he has to tell a truth to her. He doesn’t want to hide any secrets from her. He tells her the story of Manav Sharma. He doesn’t want to lie to Seema and hurt her. He reveals that Manav was his lookalike, he was his college mate, even he wanted to become an IAS officer.

He reveals how Manav was stabbed to death and was thrown into the river to die. He wants to get justice for Manav. He requests Seema to bless him. Pathak hears the entire audio recording. Robby and Pathak learn the truth that Vikram is Karan’s child. Pathak tells that Sarabjeet will lose his reputation now. He wants to use the news and ruin Sarabjeet. He tells Robby that he is ready to pay any amount for the news. Robby asks Pathak to keep helping him all life so that he continues the work. Pathak tells that he will always be there to keep their partnership.

Meher feels cheered because of Param’s innocence. Param doesn’t want to lose his old sweater. Meher tells that they can use the small sized old sweater for Karan. Sarabjeet wants Karan to have new sweater. She tells that Param and Karan will have more love when they share things. She wants Karan to be just like his father and elder brother. Vikram tells that he will take Manav’s avatar and get back Manav’s child. He wants to do justice for Manav. He doesn’t reveal that he is Manav. He tells that he has to become Manav to seek justice.

Sarabjeet tells that they have to fulfill their dreams. He tells that Manav has changed after becoming Vikram. Manav wants to use the power of his identity and get back his son. Sarabjeet and Meher are afraid for Aditi. Meher tells that Aditi will not tolerate the truth. Sarabjeet gives her strength. He tells that they will not let Vikram change his decision. He knows that Manav will not change his identity because of Seema. Manav feels relieved that Seema has permitted him to help Manav and get the rights. Manav wants to become Manav Sharma once again and get back his son. Meher is scared that Vikram will become Manav once again and come to them to take his son. She thinks the right thing. Sarabjeet doesn’t think its easy for Vikram to change his identity. What will happen next? Keep reading.

Reviewed Rating for this particular episode Choti Sardarni 23rd November 2020 Written Update Manav reveals all: 4/5 This rating is solely based on the opinion of the writer. You may post your own take on the show in the comment section below.