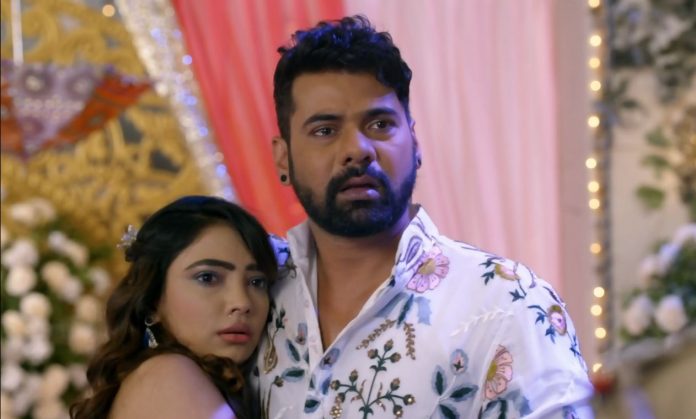 Kumkum Bhagya 23rd November 2020 Written Update Rhea arrested Prachi tells Ranbir that Pragya has raised her well and gave her values, else Ranbir would have not fallen for her. She doesn’t answer his question. He still wants to know why Pragya loves Rhea so much. Rhea and Prachi fail to talk to each other because of network issues. Abhi finds Pragya tensed about their daughters’ talk. He tells her that their daughters talk will go well.

She tells that Rhea knows their relation, Prachi doesn’t know about it. He tells her that everything will be fine. He wants Pragya and Prachi to come home and stay with Rhea and him. He dreams of happy times. Abhi gets into romance mood and flirts with Pragya, saying he has a fundamental right to romance his wife. He tells that they will soon be together because its destined. She tells him that its their Kumkum Bhagya that will always keep them together. He wants her to be with him. Meanwhile, Vikram and Pallavi are emotional about Ranbir.

They find happiness if their son is happy. She loves her son a lot. He tells that he never intervenes between them. Vikram tells her that she should give some time to him as well. She calls him Ranbir to complain about Vikram. Ranbir tells that he will take Vikram’s class. She asks him to come home. Ranbir doesn’t reveal that he is with Prachi. He tells Prachi that he wants to go home. Prachi likes his bond with Pallavi. He also likes her bond with Pragya. He asks her to remember they are engaged now. Vikram asks Pallavi if she won’t feel insecure when Ranbir will give all his time to Rhea. Pallavi doesn’t have any insecurity. Prachi doesn’t want to forgive Rhea, who tried to kill her and snatch Pragya. She calls Rhea. Rhea answers her call. Prachi wants to wish her. Mitali’s loud cries makes Rhea disconnect the call. Mitali asks Rhea to shut the door and not come downstairs. Rhea gets worried for Pragya.

She asks Mitali if Pragya is fine. She worries that Aaliya had attempted to kill Pragya. Abhi and Pragya find the family in tension. They go to check. Rhea asks Aaliya what’s happening. Abhi wants to know if things are fine. Aaliya reveals about the police coming. Rhea asks Aaliya if she has harmed Pragya, Aaliya hates Pragya. Pragya’s presence calms down Rhea. Raj and Aaliya tell that police is coming home for a reason. Pragya wants to know the reason.

Aaliya doesn’t want Pragya to open the door. The police arrives to arrest Rhea. Aaliya had filed the FIR against Rhea for murder attempt on Prachi, but she files the case by Pragya’s name so that Abhi and Rhea hate Pragya for stabbing their trust. Abhi is shocked to know that police has come to arrest Rhea. Rhea can’t believe that Pragya wants to get her arrested. Abhi tells the inspector that Rhea and Prachi are sisters, Rhea doesn’t want to kill Prachi.

He wants the police to find Sanju. He learns Rhea’s crime that she had called Sanju home to harm Prachi. He wants to handle the police. Inspector warns him to not stop his duty. He tells that he will arrest anyone who comes in between. Aaliya hypes the drama. Rhea hides behind Aaliya to protect herself. Aaliya has planned to make Abhi and Rhea against Pragya by her evil plan. She proves that Pragya had lodged the complaint and acting innocent in front of Abhi.

Pragya tells that she can never get her daughter arrested. Abhi gets confused about her. He wants to save his daughter first. He gets into an argument with the cops. Aaliya insults Pragya. She accuses Pragya for breaking the family. She takes the step so that Pragya and Prachi don’t come ever to live with Mehra family. Will Abhi learn Aaliya’s plan? Keep reading.

Reviewed Rating for this particular episode Kumkum Bhagya 23rd November 2020 Written Update Rhea arrested: 4/5 This rating is solely based on the opinion of the writer. You may post your own take on the show in the comment section below.