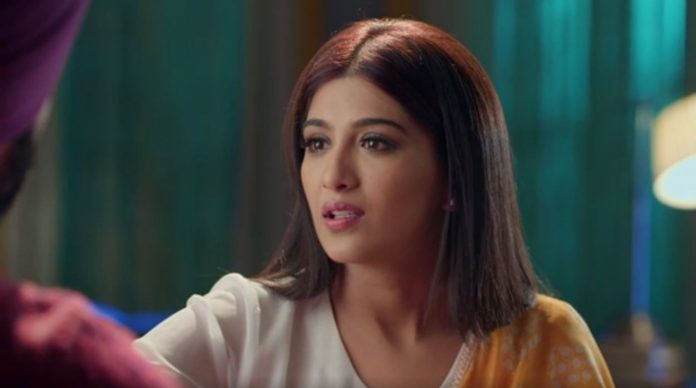 Choti Sardarni 24th November 2020 Written Update Ugly custody battle Manav is much emotional about his son. He knows that Karan would also like to be with his father. Manav recalls his son Karan and cries for him. He has a father’s heart and also the emotional pain. He gets Seema’s blessing that he makes a father win and gets the son back. Seema blesses him to win the battle and get the justice for Manav. Manav feels his victory is close since Seema is with him now. He gets confident to face Meher and Sarabjeet, who were just using Seema’s illness in their favor. Manav wants to prove that he has the most rights on his son after facing so many troubles in his life. He can’t let Meher get all the happiness alone.

He files a custody case against Meher and Sarabjeet. The lawyers suggest Meher and Manav to defame each other in the court. The lawyer asks Manav to prove to the court that Meher isn’t a good mother, she can’t take care of Karan, she can never give any happiness to Karan. Same way, the lawyer asks Meher to prove to the court that Manav had forced Meher and impregnated her. Sarabjeet and Meher are against such filthy blames on Manav. They don’t want to make the legal fight an ugly one that they stain each other’s characters and names. Will Manav agree to assassinate Meher’s character? Will Meher to stain Manav’s character as an abusive lover? To what extent will they go for this custody battle? Keep reading.

Kulwant checks Amrita’s jewellery to know what else did she transfer to her mum’s family. Amrita feels humiliated. Kulwant asks Amrita to keep her respect in the village. She reprimands Amrita for being disgrace for the family. Manav returns home and tells Aditi that Seema would be coming in some time. Aditi wants to know if he is upset.

He tells that he isn’t upset with her. She apologizes to him for her suicide attempt. She knows he is much disappointed by her madness to harm herself. She tells that she can’t accept life without him. Aditi feels it was her mistake to misunderstand him. He tells her that she needs to take some rest. He asks her not to take any stress. Manav accepts Aditi as his wife for Seema’s sake. He doesn’t want Aditi to hurt herself. Meher and Sarabjeet have a moment. They continue their routine life. Sarabjeet is praised by the village people. He has always been a helpful soul. Meher challenges Sarabjeet to have a chilli and try it.

Sarabjeet takes the challenge. Vikram meets the most famous and successful lawyer in the city, Devika. He explains that he has lost his son, but wants him back. He wants the lawyer to get Karan back to him, he is ready to fulfill his dreams at any cost. Devika tells that she is glad to help him. He tells that he isn’t fighting the case, he has to win at any cost. He tells that he is fighting the custody case against Sarabjeet and his wife Meher.

He begins the legal war. Devika didn’t imagine that he will be filing the case on a noble person like Sarabjeet. Manav tells her the complete truth of his past to Devika. Meher and Sarabjeet live their family moments with love and warmth. Param tells that Aditi and Vikram would be coming to meet them. Meher is guilty for Aditi’s state. Sarabjeet wants her to be glad that Vikram’s matter is handled well.

He doesn’t think there would be any issue now. Seema helps Aditi in packing her stuff. Aditi thanks her. Sarabjeet asks Aditi where is she going suddenly. Aditi tells about the medical conference. She has to attend it. He asks if Vikram is behaving well. Aditi tells that Vikram is keeping her happy, he has assured that there isn’t any girl in his life. Aditi tells Seema that she will speak to Vikram on the way. Sarabjeet informs Tarkesh that he planned an urgent meeting with lawyer Khurana. He cancels his other meetings. He wants Karan to always live with him. He doesn’t want any risk about Karan.

Kulwant vents her anger on Amrita and her mother as well. She hates Amrita for the lie. She wants to teach a lesson to Amrita till the time that she really regrets for the lie. Sarabjeet and Meher speak to Khurana about the custody case. Devika tells Manav that they can prove the truth easily. Manav doesn’t want to spoil Meher and Sarabjeet’s reputation. He just wants his son. She understands his emotions.

She suggests that they will get DNA test done. He reveals that Sarabjeet offered him the custody, but he couldn’t sign the papers. Sarabjeet tells that he had offered the custody to just prove that Vikram has moved on, he will just complicate Karan’s life by his dual identity. Devika tells him that his dual identity will be legalized, she will bring him out of the name game. Manav asks her if he will win the case easily. She tells that the case isn’t an easy one, he has to prove Meher a bad mother, because the baby is too young to stay without a mother.

She tells that they have to prove Meher incapable so that he gets the custody. Manav doesn’t want to stoop low. Khurana tells that Manav is Karan’s biological father, he may claim Karan anytime he wants, Meher can get Karan’s custody for few years, but then Vikram will have Karan his way. He asks Sarabjeet to disqualify Vikram’s claim by proving him as an incapable father. He suggests that they prove in the court that Vikram had assaulted Meher. Sarabjeet and Meher rebuke Khurana’s cheap suggestion.

They can’t accept such unethical thing. Sarabjeet can’t even tolerate to hear such a thing about his wife. Meher asks Khurana to be ashamed of suggesting such an evil way to defame an innocent man just to win a court case. Sarabjeet ousts Khurana. He apologizes to Meher for hurting her sentiments. He tells her that he will never accuse an innocent person with such criminal blames. He assures that they will fight the case by sticking to their principles.

Sarabjeet respects Manav and Meher’s love. He tells that he will never accuse Meher or Manav’s character. Meher respects Sarabjeet’s decision. They learn about Vikram meeting a big lawyer Devika for the custody case. Manav gives his blood sample. He thinks of some way to get Karan’s blood sample. Robby and Pathak meet him and join hands with him to help him get Karan, with a motive to ruin Sarabjeet. What will be the outcome of Sarabjeet and Manav’s legal fight? Who will benefit from it? Keep reading.

Reviewed Rating for this particular episode Choti Sardarni 24th November 2020 Written Update Ugly custody battle: 4/5 This rating is solely based on the opinion of the writer. You may post your own take on the show in the comment section below.