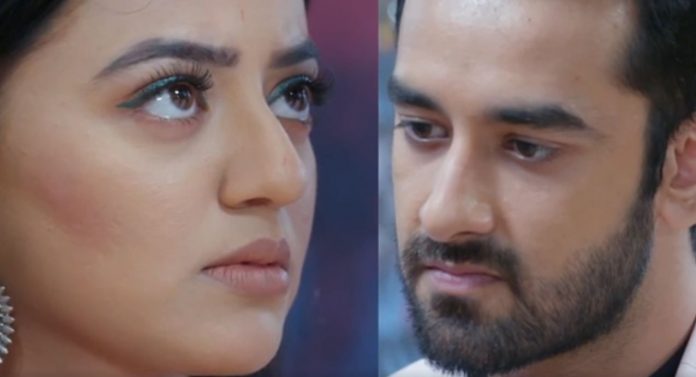 Ishq Mein Marjawan 23rd November 2020 Written Update Riddhima Kabir marriage Riddhima worries that Kabir may punish her family and risk their well being. She regrets to slap him and provoke the fire in him. He wants to punish her for the humiliating misbehavior. Riddhima can’t risk the family for her differences with Kabir. She knows his limits can’t be predicted. She decides to apologize to Kabir. She goes to Kabir and apologizes to him. She asks him to punish her, not the family.

She tells that she is ready to take any punishment from him, but she wants the family safe. He makes her apologize. His shocking condition leaves her upset. He tells her that the marriage will be a punishment for the slap. He doesn’t want her to take him light. He starts working on his plan.

He tells her that he has started to punish her family. He shocks her again. Anupriya makes sweets for the family, which makes Chanchal and Aryan suspect her. Vansh is missed by the family. Dadu wishes Vansh was with them. Kabir tells Riddhima that Anupriya had made the sweets for the family, which has poison mixed in it. He tells Riddhima that the game won’t stop, its impossible to save them, just like their marriage.

Riddhima runs to the family to save their lives. She throws away the sweetdish and shocks the family. Ishani finds her really mad. Ishani, Anupriya and Dadi question Riddhima about it. Riddhima tries to make an excuse that she was missing Vansh and lost control on her mind. She apologizes. Ishani suggests that she goes to see a psychiatrist. Dadi wants Riddhima to come out of the shock. Kabir and Anupriya wanted to show Riddhima weak and breaking down.

They want the family to decide about Riddhima’s remarriage by seeing her getting unstable. He wants the family to make Riddhima marry him. He just wants Vansh’s property by marrying Riddhima. He asks her to agree soon. Riddhima is troubled. Vihaan wants to know if Riddhima will come to meet him. He tosses a coin which has same result on both the sides. He wants to win any way and proves it.

Later, Riddhima welcomes Siya at home. She takes care of her. She wants Siya to get okay soon and join the family. Anupriya tries to take Siya’s life. She just threatens Siya and makes a laugh. She doesn’t want Siya to reveal the truth to anyone. She doesn’t think Siya can recover. Dadi prays for Siya’s recovery and Riddhima’s strength. Anupriya shocks Dadi by suggesting Kabir and Riddhima’s engagement.

Dadi opposes her thinking. She tells that Riddhima will never agree. Anupriya wants her to think of Riddhima, who is a young and helpless widow. She asks Dadi to not be selfish to keep Riddhima a widow all life just for Vansh. Chanchal and Anupriya tell her that Kabir is a nice guy, Riddhima is losing her mind, Kabir can make her get back a normal life. She adds that Riddhima will always stay with them after marrying Kabir. She wants Dadi to give her life a new start. Dadi tells them that even if she gives the nod, Riddhima will never agree for the marriage, Riddhima loved Vansh a lot and will never marry anyone else.

She tells that its too early to ask her. Chanchal asks Dadi to just Riddhima about it and decide. Dadi takes the engagement rings to Riddhima. She questions Riddhima if she is ready to marry Kabir. Ishani criticizes Dadi’s decision. Kabir gets happy that his plan is working. Dadi explains that Anupriya had proposed this alliance. Kabir threatens to kill Ishani to make Riddhima agree for the marriage. Riddhima finds Ishani in danger. She knows that Vansh was much happy for Ishani’s coming baby.

She doesn’t want Ishani’s baby to get harmed. She is tensed for Ishani and Dadi’s lives. Ishani asks Riddhima to refuse for the marriage. Dadi wants Riddhima to answer. Riddhima agrees for the marriage for the sake of family’s well-being. The family is shocked by her positive reply. Ishani accuses Riddhima for getting Vansh killed and remarrying so soon. Dadi is also hurt by Riddhima’s decision that she has moved on so soon and forgot Vansh. Riddhima is in a helpless situation. Ishani hates Riddhima’s character.

Anupriya and Chanchal ask Dadi to agree for Riddhima’s future. Dadi is heartbroken. Kabir gets his victory. He smiles seeing Riddhima in tears. Riddhima wants to save the family from Kabir’s clutches. She wants to bring back Vansh home. She meets Vihaan and hires him for playing Vansh Rai Singhania in front of the family. Will Vihaan make an entry as Vansh by following Riddhima’s plan? Surely, yes. Keep reading.

Reviewed Rating for this particular episode Ishq Mein Marjawan 23rd November 2020 Written Update Riddhima Kabir marriage: 5/5 This rating is solely based on the opinion of the writer. You may post your own take on the show in the comment section below.