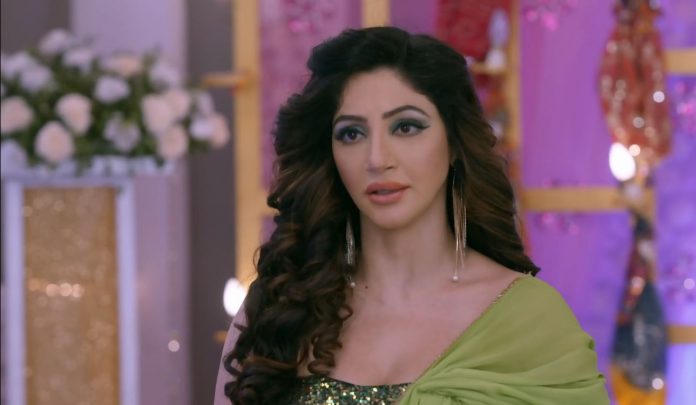 Kumkum Bhagya 24th November 2020 Written Update Aaliya’s plan exposed Aaliya accuses Pragya in front of Abhi and family. She doesn’t let Pragya defend herself. She shoots sharp accusations on Pragya. She tells that Rhea was dreaming to have a good family with Pragya, but Pragya broke her dreams and also snatched Abhi from Rhea. Abhi thinks of the police FIR signed by Pragya. Pragya wants Abhi to trust her, she didn’t take any revenge for Kiara’s death as Aaliya is stating.

Pragya goes to talk to her. Aaliya brainwashes Abhi in her absence. Rhea is thrown in the lockup. She cries that Pragya had punished her by pretending love. She can’t believe it. Prachi finds Pragya’s behavior odd. She tells that Pragya wanted her to call Rhea and wish her on diwali. She doesn’t want to have any terms with Rhea. She wants to inform Pragya. She tells Pragya that Rhea didn’t answer her calls.

Pragya tells that Rhea got arrested for the murder attempt. She cries out her pain. Abhi meets Pragya for a clarification. Pragya tells that she didn’t file any complaint. He tells her that Meera had raised Rhea after Pragya left him, he fell lonely and was devastated, he sank himself into work and kept himself engaged. He tells that he didn’t wish her daughter to suffer. He had promised himself to look after Rhea. He was a big rockstar, he left his career and turned into a businessman just for Rhea’s sake, to look after Rhea well. She asks Pragya to take back the FIR and bring Rhea home. Pragya promises to bring Rhea.

Meanwhile, Mitali confronts Aaliya about getting Rhea arrested to make Abhi and Pragya separated. Aaliya defends herself. She tells that she can never hurt Rhea. Mitali doesn’t believe that Pragya will never complain against Rhea. She knows Pragya well. She tells that Pragya can never go against her family. She suspects Aaliya. Aaliya accepts that she has done everything to make Pragya away from the family. Mitali is shocked by her confession.

Dadi defends Pragya. She tells that Pragya can never break anyone’s trust. Abhi goes to meet Aaliya. Dadi wants him to believe Pragya, she loves her children a lot, a mother can never hurt a child. Abhi knows that Pragya loves Rhea. She tells that policemen would be lying. Aaliya confesses that she has sent Rhea to jail. She admits that she has done everything by her superb planning.

She tells Mitali that she will give all the love to Rhea. She tells that she has shared Aryan’s love with Rhea, she will keep Rhea as her princess. She doesn’t want Pragya, Abhi and Rhea to unite. Mitali praises her cleverness for the superb planning to send Rhea to jail. She also wants Pragya to be away from the family. She asks Aaliya how did she manage to file the FIR by Pragya’s name. Aaliya tells that she has used her money, she has hired someone to play Pragya and get the FIR filed.

He tells that he knew that she will frame Pragya and not let them unite. He asks her to do anything, but he will bring the family together. He challenges Aaliya. He tells that he will save his family. Rhea begins to lose faith on Pragya. She loves Pragya a lot. She wants Pragya to love her. She doesn’t want Ranbir to misunderstand her further. She wants to be a good girl, a good daughter for the family. Abhi wants to free Rhea. Rhea wants to trust Pragya. Prachi learns Pragya and Rhea’s relation. Abhi and Pragya save Rhea and reveal Aaliya’s evil plotting. Rhea ends her terms with Aaliya knowing her scheme against Pragya.

Reviewed Rating for this particular episode Kumkum Bhagya 24th November 2020 Written Update Aaliya’s plan exposed: 4/5 This rating is solely based on the opinion of the writer. You may post your own take on the show in the comment section below.