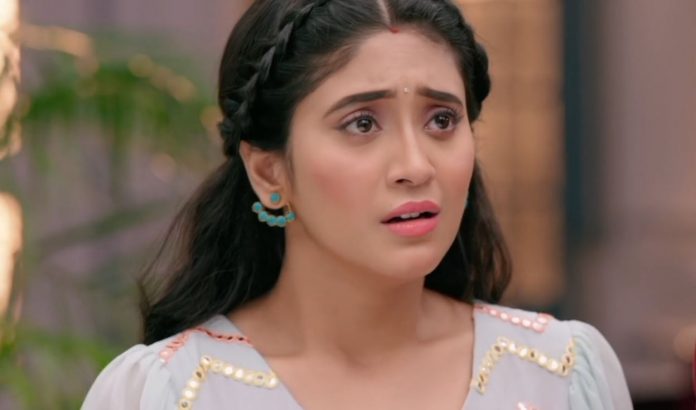 Yeh Rishta Naira loses Kairav 23rd November 2020 Written Update Gayu lashes out her anger on Kairav after she learns from Naira that Kairav has pushed down Vansh from the terrace. She reveals to the family that Vansh has lost his mobility, his legs have lost the movement. She tells Kairav that its all because of him. She accuses him further for taking revenge on Vansh for their fight. Kairav is scared of Gayu’s anger. Gayu shouts a lot at him.

The family defends Kairav who is too young to plot a crime like that. They don’t think Kairav can ever hurt Vansh, whom he loves so much. They want Kairav to speak up the truth. Kartik stops Gayu from scaring Kairav. Naira wants Kairav to clear the misunderstanding. Gayu tells the family that everyone is defending Kairav because he is a Goenka, he is their own blood unlike Vansh. She regrets that neither Samar nor the family accepted Vansh heartily.

She tells them that Kairav will be forgiven for a murder crime as well. She is much regretful for the fact that they are always defending Kairav despite knowing his numerous mistakes. She reminds him the mistakes Kairav did in the past and how Naira had come ahead to punish all the kids in the family for it. Kartik asks Kairav to tell them the truth and not bear the accusations further. Kairav finally speaks up and defends himself.

He tells them that Vansh wanted to complete the senior’s challenge to become a cool boy, while he had tried hard to stop Vansh. He tells that he didn’t push Vansh down the terrace, he was attempting to save him and stop him from the jail. Kartik believes Kairav completely on hearing the truth. The family also believes Kairav, but Naira is still unsure since she has seen Kairav there. Gayu expects Naira to do the justice.

She reprimands Kairav for pushing Vansh down when he knew the risk. She tells that Kairav is responsible for Vansh’s injuries and disability. She provokes Naira’s anger further by insulting Kairav’s intentions. She asks Naira to punish Kairav just like she punishes children of other people when they do wrong. She wants Naira to call the police and get Kairav punished. Kairav gets worried on hearing about the police. Kairav doesn’t want the family to doubt his intentions. He pleads to them that he didn’t do anything wrong.

Gayu wants Kartik and Naira to call the police. Kartik apologizes to Gayu. He wants her to think of Vansh’s treatment. Gayu wants justice and is adamant. She tells that she will call the cops. She asks Naira to support her for Akshara’s sake. She tells that Naira should say the truth to the family. Naira is in a big dilemma. Her senses stop working. Kairav gets scared of Naira and Gayu’s anger. He feels they will definitely give him to the cops.

He runs from the house seeing Naira’s loss of faith. Kartik and Naira chase Kairav and save him from meeting an accident. Kairav hugs Kartik and tells him that Naira doesn’t trust him and will call the police. He doesn’t want to meet Naira. He wants her to stay away. Naira feels Kairav is in her place, just like she couldn’t trust Akshara. She doesn’t want her son to get away from her. Kartik takes Kairav with him. He tries to calm down Kairav’s fear that was making him away from family. Kairav requests him to stop Naira from meeting him. He dislikes her that she never keeps her promise. Kartik wants Naira to stay away from Kairav.

He doesn’t want to lose Kairav’s faith. He tells Naira that Kairav is sharing his fears with him, and he can’t lose his son’s trust. He asks Naira to not meet Kairav or scare him further. Naira is depressed to see Kairav getting distant from her. What will Naira do to win back Kairav? Will Gayu forgive Kairav? Keep reading.

Reviewed Rating for this particular episode Yeh Rishta Naira loses Kairav 23rd November 2020 Written Update: 4/5 This rating is solely based on the opinion of the writer. You may post your own take on the show in the comment section below.