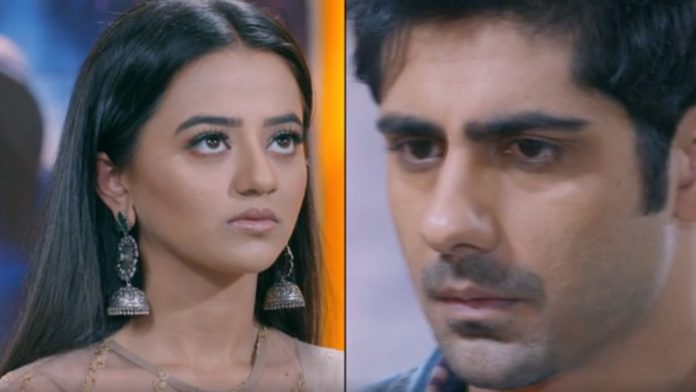 Ishq Mein Marjawan 24th November 2020 Written Update Riddhima Vihaan united plan Riddhima gets helpless to rush to meet Vihaan because of Kabir’s marriage challenge. Vihaan knew that she will come to meet him and ask him to become Vansh, but he didn’t know that she will be coming so soon. He doesn’t know what situation she is dealing with at home. She is forced for the marriage by Kabir. She doesn’t want to marry Kabir. She knows that even Dadi is upset with her for the decision. She doesn’t want Anupriya and Kabir to win.

She is afraid for Ishani’s baby. She thinks just Vihaan is the one who can save her from the mess, once he comes home as Vansh, the family will not ask her to marry Kabir. She wants Vansh’s doppelganger to enter the house. She meets Vihaan with a request. She has plans to make him take Vansh’s place for a purpose, that’s to fight Kabir and defeat him. She meets Vihaan and asks him for help. She tells him that he has to become Vansh for the Rai Singhania family. Vihaan pretends to be ignorant of Vansh’s identity and looks.

He already knows every little detail about Vansh and the family. He wants Riddhima to think that she is leading him. Riddhima shows him Vansh’s picture. He questions her about his picture. She tells him about Vansh Rai Singhania and his strong personality. She asks him to pick up Vansh’s avatar to meet the family and convince them that he is Vansh. She tells that she has a reason to take him as Vansh.

She doesn’t reveal about Kabir threatening the family’s life. She tells that Vansh is her husband, who died recently. She is ready to give him money for the risky work. She tells him that she will take up the responsibility to train him as Vansh and help him gain the family’s trust. She tells him that if his time is precious, then he can make more of it by helping her for money. She asks him to take it as a job. Vihaan is ready to accept the job. She tells him that she will give him all the details about her husband. He seems to not show interest first, but she convinces him. He doesn’t reveal his excitement on his plan working. He accepts the deal to become Vansh Rai Singhania. Vansh will be back in his family as Vihaan, but will be Vansh for them again. How excited are you to watch this new twist? Keep reading.

Riddhima is much hurt that she has not met Dadi’s expectations. She didn’t wish to break Dadi’s heart. She wants to find a way to tackle Kabir and tell the truth to Dadi. She wants to convey that she can never cheat Dadi and Vansh. Kabir wants to soon replace Vansh in the family. He tells that Vansh will soon be out of the family’s heart. He wants to rule in the VR mansion and end Vansh’s every memory.

Anupriya suspects Riddhima who has agreed so soon. Kabir tells that Riddhima’s emotions are her weakness, she has to say yes for the sake of her family. She knows that Riddhima will not accept defeat and plan something out. He doesn’t think Riddhima can dare to go against him. Riddhima leaves a letter for Dadi. She wants Dadi to stop the marriage. She hopes Dadi reads the letter and stops the marriage.

She doesn’t want to marry Kabir ever. Ishani knows Dadi is hurt by Riddhima’s decision. She wants to get Riddhima and Kabir out of the house. She asks Dadi to just permit her. Dadi gets Riddhima’s letter. Before she could get it, Kabir comes to meet Dadi and brainwash her. He tells that he wants to talk to Dadi regarding Riddhima. He sends away Ishani. He wants Dadi to know about his side of story. He tells her that he is just following his dad’s footsteps, since Vansh and his dad has also married Anupriya and have given her support.

He wants to do the same and shoulder Riddhima all life. He tells that he wants to take up Riddhima’s responsibility and keep her happy which Vansh would also want. He asks Dadi to have faith in him. He acts sweet, innocent and good-hearted to win her vote. He tells that his aim is to bring happiness in the family. Dadi is speechless. He wants Dadi to understand his emotions. He waits for her to break her silence and give a reply. Dadi goes to Riddhima to tell her decision. She asks Riddhima to marry Kabir.

He sings a song for her in a funny way. He tells that they will be marrying in three days. Riddhima reprimands him for his cheap motives. He tells her that he can cross any limits for his motives. He wants to see her as his bride soon. The dupatta has a hilarious design with Kabir’s Riddhima written on it. Kabir tells that she will become his wife soon. He tells her that he will be marrying her and take Vansh’s place in her life. Riddhima wants to find a quick way to escape from the unwanted marriage.

Kabir tells her that she can never go away from him. Riddhima is troubled by Kabir’s threatening. She wants to be Vansh’s wife until she is alive. She knows a way to save herself from Kabir. She goes to Vihaan’s place to meet him. Vihaan pretends to be bored to see her once again for no reason. She provides him a big reason for her arrival. She asks him to play Vansh’s role in the family so that she can defeat her enemies. He asks her further about her late husband Vansh. He tells that its not possible that Vansh looks exactly like him. She asks him if he is ready to become Vansh for her sake.

She offers him a big amount to convince him, since he states the danger involved in the game. She tells him that she will be training him to make him behave like Vansh. Vihaan thinks it won’t be so tough. He accepts the interesting deal. She warns him to think of any other thing while he plays her husband’s role. He asks the reason for making him pretend Vansh’s identity. She doesn’t want to reveal anything to him so soon. She tells that she will gradually reveal her plans to him. Vihaan accepts the offer.

He demands 5 crores for his work since the danger involved is too big. She tries to negotiate. He tells that she can at least 50 lakhs to seal the deal in 24 hours. He asks her to make a leave. She finds it hard to arrange money for him. Riddhima arrives home and is shocked by the surprise engagement preparations done by Kabir. Kabir involves the family. Anupriya puts up an emotional drama that she is missing Vansh a lot. Ishani opposes Riddhima and Kabir equally. She is hurt that Riddhima has broken Dadi’s trust. She insults Kabir once again. Kabir doesn’t want to spare Ishani for the humiliation. Riddhima gets certain to get Vihaan home.

Reviewed Rating for this particular episode Ishq Mein Marjawan 24th November 2020 Written Update Riddhima Vihaan united plan: Best part is Kabir’s funny song, threatening dialogues and killer expressions. 5/5 This rating is solely based on the opinion of the writer. You may post your own take on the show in the comment section below.