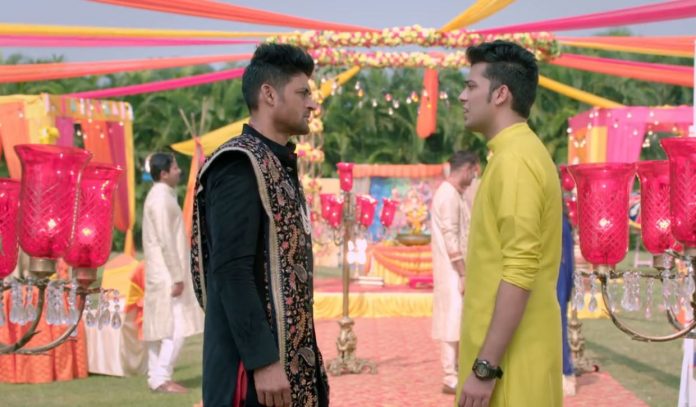 Shaadi Mubarak 24th November 2020 Written Update Massive Shock Nandini doesn’t want KT to go anywhere else at the time of marriage so that her plan doesn’t fail. She makes sure that KT is with her. She remembers their special moments and wants to remind him as well. KT is restless because of Nandini’s memories flashing in front of his eyes. He really thinks that Arjun’s mom can be Nandini. Arjun and Nandini put up a drama to stop KT when he wants to go away. Nandini pretends to fall unconscious.

Arjun seeks KT’s help to take her to the room. He tells that his dad would be coming soon and nothing shall go wrong. He doesn’t let Preeti see Nandini’s face. KT doesn’t know what storm is going to strike him. Preeti asks KT to help out Arjun’s mom. KT gets helpless to lift Nandini and take her. Nandini had planned this moment purposely to remind KT their past. Rati wants to bring back Preeti home and turn her into a maid again.

She asks Tarun to be ready to welcome Preeti home since her last project completion will end her partnership with KT. Tarun got enough of Preeti and KT’s news. He doesn’t want to talk about them again. He asks Rati to let him do his work and stop following Preeti’s life. He wants to focus on his life. Rati finds him losing interest in insulting Preeti. She doesn’t want him to forget their goals of breaking down Preeti’s esteem.

KT is affected by Nandini’s presence. He gets trapped when Arjun leaves him with Nandini and goes away. KT is helpless to look after her. Nandini tries to make him perform some rituals with him. Preeti helps out Nandini, who gets dressed in the bridal attire with dreams in eyes to marry KT. Nandini gets KT’s name on her hand. Preeti gets KT’s name as well when she holds Nandini’s hand to save her from falling down.

They both get the same mehendi and same name on their hands. KT gets a huge shock when Arjun discloses the truth that he is KT’s son. He tells KT that he wanted to tell him the truth since a long time. He requests KT to complete their family by marrying Nandini. Arjun takes KT to Nandini. KT can’t believe that his intuition was true. Arjun is ecstatic that his parents will be married.

Arjun then mocks everything. He tells KT that he was actually preparing a speech for his dad. KT is relieved. Arjun asks him if his dad will agree to marry. KT tells that his dad will definitely agree, his heart will melt down by the true emotions. He tells that father and son’s bond is such that father will accept son back by forgiving his wife. He adds that Arjun’s dad will really come. Arjun gets hopeful that he has touched KT’s heart and now he can surely convince him to marry Nandini.

Arjun tells him that his dad has arrived. He sends away KT to welcome the groom. KT awaits the groom, unknown that he is the groom himself. Preeti speaks to Kusum on video call. Kusum sees Nandini’s dress and connects the dots. She feels Nandini is the bride and she is trapping KT. She gets worried for KT. Nandini teaches Arjun to convince KT. Arjun plans the next drama to make KT emotional. Preeti fails to know Nandini’s truth.

KT suspects Arjun when he senses Nandini around. Arjun grows KT curious to know about the bride. KT ends up lifting Nandini’s ghunghat and sees her face. Its a massive shocker for him and his family. Nandini and Arjun ask KT to agree for the marriage and complete the family. KT gets emotional on seeing Arjun. KT takes a big move. He is agitated with Nandini’s return. He recalls her cheat and doesn’t think she deserves a second chance. He doesn’t forgive her even for Arjun’s sake. He feels Nandini used Arjun to trap him. He takes a huge decision and marries Preeti by filling the sindoor.

Reviewed Rating for this particular episode Shaadi Mubarak 24th November 2020 Written Update Massive Shock: 5/5 This rating is solely based on the opinion of the writer. You may post your own take on the show in the comment section below.