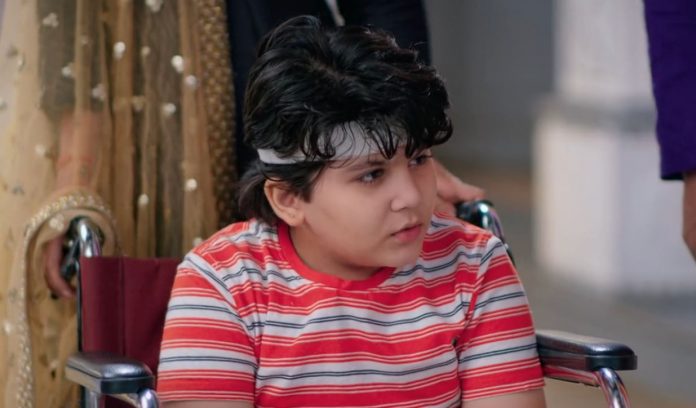 He wants her to win Kairav’s trust so that their family doesn’t break. He fears that if he supports Naira and lets her meet Kairav, then Kairav will lose faith on him as well and get away from them. He is mkuch afraid to just think of losing Kairav. Naira understands Kairav’s emotions. She just wants to see him once, but Kartik doesn’t allow her. Kartik asks her to give time to Kairav and earn his trust back. He wants her to show that she also believes Kairav’s innocence. Kairav stays upset and worries for Vansh.

Manish is worried that even Samarth couldn’t go to Mumbai for the project. He tells Dadi that Kartik and Samarth got so busy in the family issues that work is still pending. Dadi doesn’t want him to talk of business at the time when the family needs Kartik and Samarth. She pities Vansh who will never walk again. Manish finds a chance to vent his anger on Kartik and Naira, who have failed to be good parents for Kairav once again.

He wants them to focus their attention on Kairav, not Krishna. Gayu brings Vansh home much to everyone’s dismay. Vansh tells them that he can never stand on his feet. Kairav cries his heart out for Vansh, but the latter changes his mind. Kartik knew the matter will get worse and stopped Naira from meeting Vansh seeing the way Gayu is behaving. He didn’t want any other issue in the family because of Naira’s hyper emotions. Gayu wants Naira to stay away from Vansh. She finds Kairav a dangerous kid who can harm Vansh again. She asks Naira to keep her son away.

Naira feels hurt that Kartik is making her away from Kairav and Gayu isn’t letting her meet Vansh. She can’t live away from the kids. She just wanted to fix up things. She finds Kartik looking after Kairav. Gayu takes care of Vansh and keeps him away from Naira and Kairav. Naira sheds tears of sorrow seeing the way she is getting boycotted. She finds Kairav getting distant from her heart. Kairav meets Vansh and prays for his recovery. He feels bad seeing Vansh on the wheelchair. The brothers get emotional.

Vansh regrets to fulfill the challenge and hurt himself when Kairav told him not to go ahead. He didn’t take Kairav’s wise advice. He feels miserable. Kairav tries to cheer him up. Gayu reacts angrily on seeing Kairav with Vansh. She wants him to go away and never meet Vansh again. Naira feels bad on seeing Gayu ill-treating Kairav. She wants to ask Vansh about the accident. Naira promises Vansh that no one will scold him if he tells the truth. Kairav expects Vansh to say the truth. Vansh gets scared of Samarth. Samarth reprimands Naira for manipulating Vansh.

Samarth swears to not spare Vansh if the latter is wrong. He also wants Vansh to answer Naira and end the matter forever. He doesn’t let Naira blame his parenting. He asks Naira to handle her son, who isn’t in her control. Vansh doesn’t want Samarth to make him away. Vansh decides to lie to the family when he gets questioned by them about his accident. Vansh doesn’t want to look stupid in front of the family. He is afraid of the elders’ scolding when he reveals that he jumped down the terrace by his own wish. The family is much dejected to see his state, while Gayu loses her cool on seeing Naira question Vansh further. Vansh lies that Kairav has pushed him down. Kairav didn’t know Vansh will frame him to save himself.

Kairav runs away from Naira when he learns that Gayu and Samarth are planning to call the police. He thinks Naira will also support them. Naira tries to defend her son which further upsets Gayu. Gayu doesn’t think that Vansh is lying. Kairav faints down by the stress. Kartik blames Naira for pestering Kairav with her questions. Naira tells him that she didn’t ask anything to Kairav. Kartik gets Kairav treated in time.

The family learns about Kairav’s high stress levels which could be fatal for his heart. Kartik and Naira are moved to know this. Gayu constantly blames Kairav and Naira for Vansh’s state. She calls Kartik partial as well. Kartik decides to take his family away to save Kairav from the arrest. He tells Gayu that he will be leaving the house and take his family far from Goenkas. Manish and Dadi see the family breaking because of the kids’ issues. They can’t tolerate Kartik’s departure. What will happen now? Keep reading.

Reviewed Rating for this particular episode Yeh Rishta Shocking lie 24th November 2020 Written Update: 2/5 This rating is solely based on the opinion of the writer. You may post your own take on the show in the comment section below.