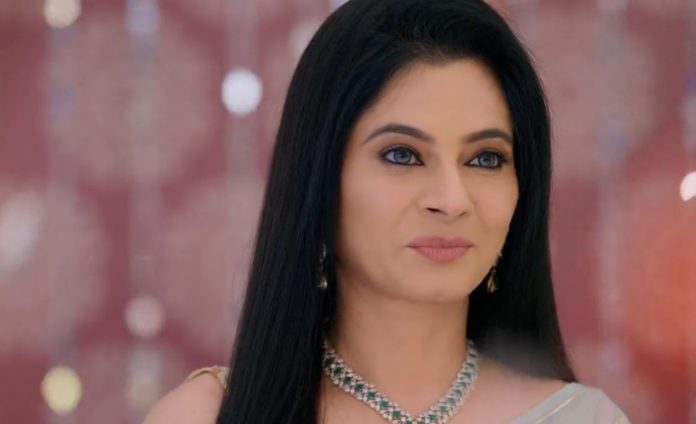 Anupama 25th November 2020 Written Update Rakhi creates a havoc Rakhi exposes Vanraj’s truth in front of Vanraj’s family. Anupama finds her family feeling ashamed and shattered because of Vanraj’s affair. She stops Rakhi from humiliating Vanraj. She realizes that Rakhi has planned to expose the shocking affair even when she knew about Hasmukh’s weak condition. Anupama tells that she can never let anyone hurt her family. She tells that she can’t see tears in the eyes of her family. Rakhi tells her that she isn’t like her to hide husband’s extra-marital affair from the family. She doesn’t care for anyone.

She admits that she had planned to expose Vanraj and Kavya’s affair. She apologizes to Leela and Hasmukh. She tells them that she had lied to bring out their son’s truth out. She reveals that Anupama already knew this truth and had been hiding it from them. Leela and Hasmukh realize Anupama’s greatness. Rakhi sends away the staff and guests. She tells that just the family is left to discuss Vanraj’s disgusting act. She stops Kinjal from supporting Shah family.

She rages at Kinjal like never before. She asks Kinjal not to get blind in love and ignore the truth. She wants to secure Kinjal’s future by saving her from an unethical family like Shah family. She asks Anupama if she would get Pakhi married in such a wrong family. She insults Vanraj in front of them and makes them feel ashamed. Sanjay wants to take the kids away, but Pakhi wants to see Vanraj’s truth.

Rakhi tells that she will not let Kinjal get related to such a bad family. She takes a shocking decision about Paritosh and Kinjal’s marriage. She calls off their marriage. She reveals the harsh truth to Leela and Hasmukh. She tells that Anupama had caught Vanraj and Kavya red-handed on the day of marriage and fainted down by the shock. Anupama begs her not to say such painful things in front of Baa and Bapu ji. Rakhi tells that Vanraj is really disgusting, he married Anupama and wanted to romance Kavya.

She understands Anupama’s sorrow and pain to see her husband cheating on her. Vanraj stands shocked by the truth surfacing layer by layer. Rakhi tells that Vanraj is really a shameless man. Anupama worries for Hasmukh’s condition. She asks Rakhi to not tell anything further. Rakhi reveals that Vanraj and Kavya are hiding their affair since years. She doesn’t want them to hurt them. She tells that she would have hidden the truth from them, but Vanraj is still cheating the family. She wants the family to put a stop to Vanraj’s shameless actions.

She tells that she has to think of Kinjal’s future, she can’t answer her known circle about Vanraj’s misdeeds. She asks Paritosh to understand her concern, she can’t believe him, since he is Vanraj’s blood. She tells that Paritosh may also walk on Vanraj’s footsteps. She throws away Kinjal’s engagement ring. She doesn’t want Vanraj to become Kinjal’s father-in-law. She warns Paritosh against meeting Kavya.

She threatens to reveal Vanraj’s loose character to the world if Shah family dares to connect with her daughter again. She humiliates Anupama and her family. She doesn’t want to have any terms with them. She leaves Paritosh shattered by breaking the relation. She wants the Shah family to leave the resort at once. She takes Kinjal away. Vanraj and Kavya face the family. Vanraj has no courage to meet his family and answer them for his wrong actions. Hasmukh asks Leela not to initiate any talk there to create a drama.

He wants everyone to pack their bags and leave for home. Paritosh gets the engagement ring. He cries for Kinjal. He holds Vanraj’s responsible for ruining his life. He starts hating Vanraj. Vanraj sees the same hatred in Samar and Pakhi’s eyes. Kavya asks Vanraj to stay back with her and console her, since she is equally sorrowful. He tells her that he has to go home and answer his family. She asks how can he leave her alone. He tells that Anupama will make his family against him. He can’t let his family end terms with her. He asks her to understand his situation. Kavya’s dreamy date gets ruined.

Rakhi explains to Kinjal that she took the right move for her future. Kinjal feels the drama was unnecessary. She loves Shah family as her own family. Rakhi and Kinjal get into an argument. Rakhi doesn’t trust Paritosh, since he had hidden his dad’s affair. She doesn’t want Kinjal to cry when Paritosh gets into an affair. She warns Kinjal to stay away from such a wrong family. She declares that the marriage will not happen at any cost. Kinjal sheds tears. Rakhi finally settles scores with Anupama. Anupama didn’t know that Baa and Bapu ji will be hurt in this way. She knows that Vanraj has fallen in his parents and children’s sight. She fears that her family will break. She didn’t imagine to see this fearful sight.

Reviewed Rating for this particular episode Anupama 25th November 2020 Written Update Rakhi creates a havoc: 5/5 This rating is solely based on the opinion of the writer. You may post your own take on the show in the comment section below.