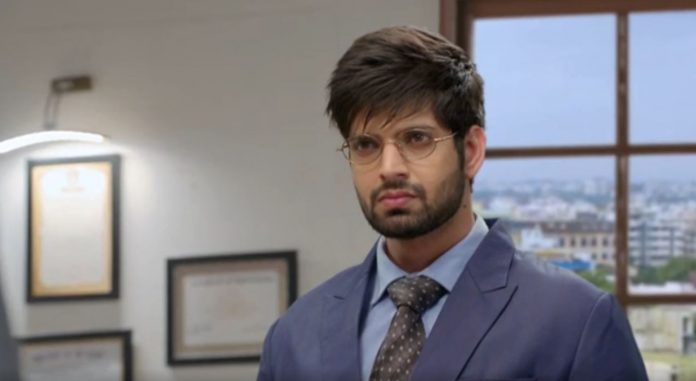 Choti Sardarni 26th November 2020 Written Update Manav desperate for Karan Robby introduces Kumar Pathak. He tells that Pathak is also Meher’s enemy. Manav doesn’t want to entertain them. He asks them to leave, he is too busy. Pathak tells that he has come to help. Robby tells that he will get Karan for Vikram. Manav asks them not to fool him. He finds Robby a wrong man. He tells that Robby is cheating the family, which means that he can’t be loyal to anyone.

Robby tells that he couldn’t see Karan staying away from his real dad, he is getting ill-treated in the Gill mansion. Manav asks him what does he mean to say. Robby manipulates him by showing him a video of Harleen, just treating Param well. He tells that Harleen just loves Param, she doesn’t love Karan. She tells that she is just Param’s Bua. Param wants her to love Karan as well. Meher and Sarabjeet want Param to respect Harleen.

Meher tells that Karan is happy wearing Param’s old sweater. Sarabjeet feels the same. Robby records the video to show to Manav. Manav feels bad that they are treating Karan so bad. He thinks Gill family is insensitive. He agrees to take Pathak and Robby’s help. Param tells that he will not wear the new sweater, if Karan doesn’t get a new one. He cries a lot. Sarabjeet asks Harleen why didn’t she get a new sweater for Karan.

She gets upset that he is teaching her. She tells that she doesn’t feel the same bond with Karan which she feels for Param. She had explained Sarabjeet that she has no problem with Karan, just Param is special for her. Meher consoles Param. She tells that Sarabjeet will decide Karan’s new sweater. Param gets cheered. Meher is upset by Harleen’s biasing. Robby tells Manav that Harleen will never love Karan, knowing he isn’t Sarabjeet’s son. Pathak tells Manav that he has advised Robby to help him, so that Karan gets justice.

Pathak tells that he will arrange the sample with ease. He asks Manav not to worry about it. Manav agrees to join hands with them. Pathak tells Robby that they shall meet Kulwant now. Amrita comes to Gill mansion to meet Meher. She sounds much upset. Meher wants to know the matter. Robby tells Meher that he called the staff for sanitizing the house. Manav tells Devika that he doesn’t want to fight the case.

Devika wants to know why did he change his mind. He tells her that he doesn’t want the media to know anything. He wants to resolve the family matter by talking to Sarabjeet. Aditi calls Manav. She misses him. He asks her if everything is fine. She asks him if he is at home. She makes a video call to know if he is really at home. He tells that he is at home, she shouldn’t doubt him. She tells him that she wanted to see him, she loves him a lot. He doesn’t want her to act so sweet. He is tolerating Aditi just for the sake of Karan. He has no willingness to meet the matter. Amrita tells Kulwant’s troubles to Meher.

Reviewed Rating for this particular episode Choti Sardarni 26th November 2020 Written Update Manav desperate for Karan: 3/5 This rating is solely based on the opinion of the writer. You may post your own take on the show in the comment section below.