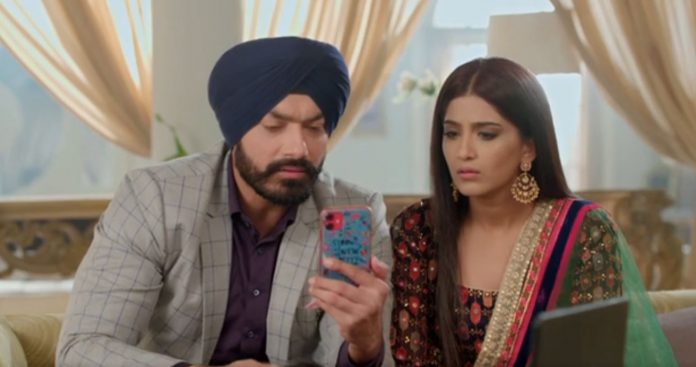 Choti Sardarni 27th November 2020 Written Update Good news for Mehrab Meher and Sarabjeet find out Karan’s reason for cry. They realize that something has pricked Karan’s hand. They see some bleeding on Karan’s hand. Amrita tells that maybe its a mosquito bite. Param also cries when his brother cries. Meher and Sarabjeet console Karan. Param tells Karan about their dad’s surprise.

Meanwhile, Pathak meets Kulwant and plays Vikram’s audio recording. He tells her that he has a solid evidence against her. Kulwant gets worried. Param wants Harleen to love Karan as well. She doesn’t want to upset him. He tells that he will share everything with Karan. She doesn’t want Param to share the property with Karan. She wants Param to have sole rights on the house and property. She tells him that their choices and needs will be different.

She tells that she loves him more. Param doesn’t understand her words. He sits revising tables. He goes away to take Meher’s help. Meher tells Amrita that she can’t support her family by selling her jewellery. Amrita tells that she can’t beg to Kulwant. Meher asks her not to beg to anyone and find another way. Param takes Amrita’s help in his studies. Meher gets some money to help Amrita. Amrita teaches Param the table in an easy way.

Param is thankful to Amrita for teaching him by the tricks. Meher gets an idea to hire Amrita for Param’s tuition. Kulwant asks Pathak not to act smart. She tells that he can’t test her. She wants to know what he wants. He comes to the point and demands a huge land plot from her. She asks him what would he do by claiming the land. He tells her that he will have coaching classes business and take Kulwant as the partner.

He tells that he will get help in funding his political party also. Meher advises Amrita to run coaching classes and earn much money every month. Amrita tells her that she can’t do work when she is a housewife. Meher tells that its not easy to be a housewife, that’s the toughest thing. She tells her that they should not underestimate themselves, housewives can run business well as well. Param claps for Meher. Kulwant asks him why will he run coaching classes.

He tells that education field is a better and secure one than medical business. He asks Kulwant not to think much and make big profits. She finds his proposal a nice one. He tells her that she should grab the chance. She tells him that she is ready to have the partnership. They both have big dreams of making money. Meher encourages Amrita to open the coaching centre.

On the other side, Manav is just worried for her son. He wants to know about Karan. Aditi surprises him on a video call. She tells that she was waiting for him since three hours and arranged an online dinner. She tells that she couldn’t wait for tomorrow. She reminds the special day when she is returning home. He tells that its really a special day for him. Meher finds it funny that Sarabjeet and Param are having a cycle race on the bed. Meher also joins the madness. Sarabjeet gets a call. He is happy that Vikram has backed out from filing the legal case. He tells Meher that Vikram didn’t file the custody case.

He praises Vikram for his good sensibility and right decision in Karan’s matter. Meher knows that Manav will not change his mind so easily, he is really stubborn. She wants to know what is Manav up to. Will they get to know Manav’s secret plan to get Karan? Keep reading.

Reviewed Rating for this particular episode Choti Sardarni 27th November 2020 Written Update Good news for Mehrab: 3/5 This rating is solely based on the opinion of the writer. You may post your own take on the show in the comment section below.